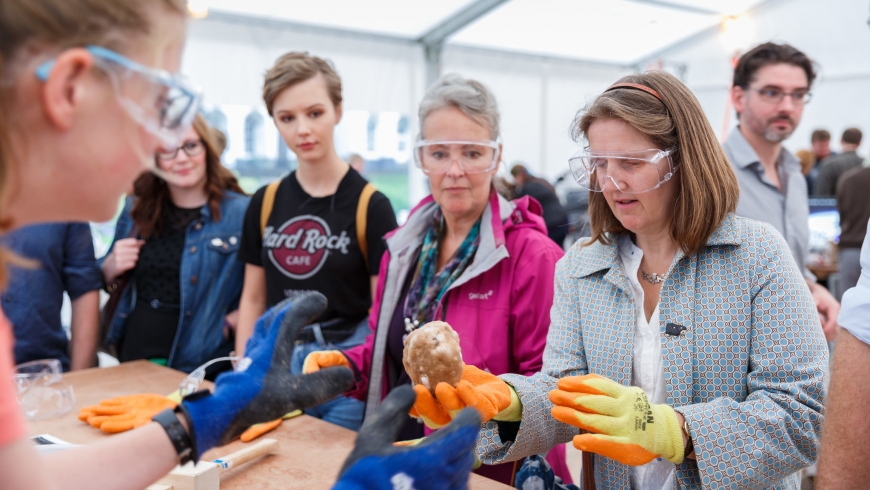 A workshop space during the day, our Apollo tent transforms into an open free stage in the evenings. Grab a drink and delicious bites from our Festival traders and settle in for some grand entertainment. Get a glimpse of what our FameLab International contestants bring to the stage in bite size science talks, be entertained with shows from astronomy to chemistry and science inspired music.

A huge, free interactive space to get hands-on with the latest exciting research and technology. Find out more about the world and how it works; with virtual reality, aeroplane engineering, chemistry and so much more!

Enter a celebration of making in the MakerShack. Explore marvellous materials and discover traditional and futuristic technology with our host of makers, engineers, craftspeople and researchers.

Play with the world’s first gaming robot, make a brick, try hand embroidery, discover the futuristic potentials of 3D printing, help to build the best marble run ever and race against the clock to rebuild a mini jet engine.

Step into a fascinating digital world… Come into the GCHQ Cyber Zone and see what it’s like to be a code cracker, ethical hacker and cyber security expert. Escape to cyber space using our virtual reality headsets and try your hand at coding, solving puzzles and gaming.

Find out more about how to defend the web, get hands-on with new technology and meet top experts in our packed programme of free activities throughout the week.

Come and find out about our programmes to inspire the next generation in Science, Technology, Engineering and Maths (STEM): visit us in the EDF Energy Zone in Imperial Square to find out how we are encouraging the scientists, engineers and thinkers of tomorrow.

As the UK’s largest producer of low carbon electricity, EDF Energy is committed to helping young people understand the great career opportunities available in a STEM related industry. Currently only one in four people working in core science, technology, engineering and maths fields is female. Our Pretty Curious campaign aims to change this.

Transport yourself to GE’s Digital Pavilion and connect with a world of Science, Technology, Engineering and Maths.

Exploring various hands-on engineering activities, you’ll connect with GE engineers who are solving big technology challenges and working on things that really matter to each of us: powering our communities, flying safely and diagnosing, treating and monitoring patients worldwide.

During the Festival there will be a number of talks and activities to introduce young people to possible career paths, demonstrating how personal aspirations, interests and passions can go hand in hand with world industry and business needs. Visit the GE Digital Pavilion to find out about career opportunities and how GE is solving engineering challenges by connecting the world.

Drop in to take part in exciting experiments, explore pioneering research and find out more about the science of sport and exercise, equine performance, animal welfare and agriculture. 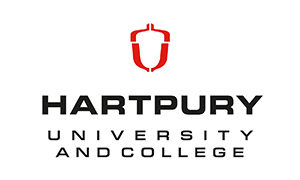 Learn more about how woods and trees benefit the environment around us with some hands-on activities and fun from the people behind Nature Detectives.

Following horse and wallaby investigations in previous years, the Hartpury team are back for another detailed large exotic animal dissection.

Stargazing In The Gardens

Join members of the Cotswold Astronomical Society for a supervised evening of stargazing. Dependent on clear skies.

Daily
All ages
Across the Festival Site

Collect your quiz sheet from the Woodland Trust stand and follow the trail around Imperial Square to find out more about flora and fauna and the natural sciences.

Daily
Ages 10+
Across the Festival Site

In celebration of the 150th anniversary of the Periodic Table, discover the most fascinating elements by following our trail through the Festival Village. Pick up your trail sheet from the Chemistry Orienteering Trail starting point by the Apollo tent. 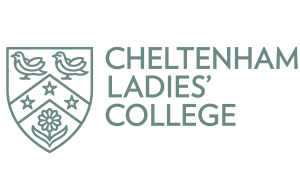 The place to grab a cuppa and continue those thought-provoking discussions, take part in workshops or enjoy free pop-up performances and brain teasers.

Looking for free events and workshops in between talks at the Festival? Look no further…

A Very Short Introduction To… Matter

Physicist Geoff Cottrell explores all things matter, from its familiar forms as solids, liquids and gases to plasmas and even antimatter. Tracing the origins of matter in the Big Bang, he looks at atoms, energy and mass, and explores the mysterious forms of dark matter and dark energy.

The mysterious nature of black holes and their ability to steal material as they grow have puzzled and fascinated scientists for decades. Katherine Blundell uncovers what black holes actually are, how they are characterized and discovered, and what would happen to you if you ever came too close to one.

A Very Short Introduction to… Infinity

Infinity is not a number. It’s the concept of something that is unlimited, endless, without bound. Having challenged the greatest scientists, mathematicians and philosophers over the ages, Ian Stewart debates the meaning of the mind-bending idea and uses real life examples to show its importance in our lives.

Robert Neville is the last living man on Earth… but he is not alone. Every other man, woman and child on the planet has become a vampire, and they are hungry for blood. How long can one man survive like this? And will he find the source of the infection? Join the Bad Bugs Book Club to unpick the scientific validity of Richard Matheson’s epic film and novel.

A Very Short Introduction to… Dyslexia

What is Dyslexia? Known as a reading disorder, this learning disability affects 1 in 10 people in the UK. Outlining strategies and interventions which strive to help people with dyslexia today, Margaret Snowling introduces groundbreaking research that attempts to uncover potential causes and helps understand its effects.

British AI firm DeepMind shocked the world when it revealed AlphaZero, a system that taught itself to become the strongest chess player in history. Matthew Sadler and Natasha Regan (Game Changer), show how AlphaZero’s unusual approach could improve your own chess game and consider how AI might be applied in the real world.

Go is played primarily through intuition and feel, and due to its beauty, subtlety and intellectual depth, it has captured the human imagination for centuries. Whilst the rules are few, Go is a game of profound complexity. Join us for a game and pick up hints and tips from former England women’s Go team player Natasha Regan and chess Grandmaster Matthew Sadler.

This event is suitable for beginners.

Meet Mental Health Mates for a relaxed and friendly gathering to chat about your experience with mental illness without fear of judgement. You do not have to be diagnosed with a mental health issue to join the walk – everyone is welcome.

Drop in and join the Institute of Physics and the Manchester Game Studies Network at this fully interactive workshop. You’ll take part in a racing car board game, whilst diving into Newton’s laws of motion.

What makes the best athletes better than the rest? Join researchers from Loughborough University to explore the science underpinning sport, exercise, health and wellbeing – from a cellular level through to whole body and mind.

Get hands-on and explore how humans are created by making your very own DNA bracelet, writing your name in genetic code, checking out your fingertips under the microscope or guessing where different internal organs fit in your body. Drop in to The Happiness Lab (Thursday, 5–7.30pm & Friday, 5–8pm) and explore what psychologists, doctors and faith leaders say will make people happier.

From drug design to healing hearts, roll up and take on a fairground of fun.

Join in with interactive fun for all the family and visit our drop-in stalls across the Festival Village. From dinosaurs to bubbles, there's something for everyone.

RT @CheltLitFest: #BlueMonday is decidedly less blue when it’s filled with books 📚📚 Here’s what we were tucking into this weekend... https…