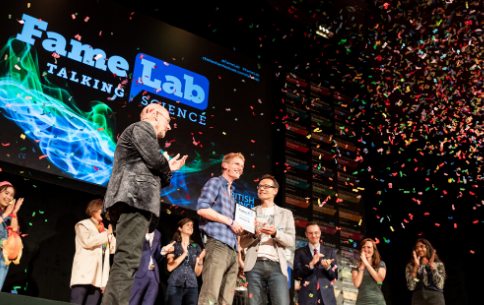 Who will be the next FameLab UK Champion? Join some of the best science communicators in the country as they go head to head in this battle of mind and word. Our contestants will entertain you with fascinating subjects and mind-blowing research in bite-size, three-minute talks – science geekery galore! Judged on content, clarity and charisma, expect a science showdown of unseen magnitude. The judges are TV presenter Dallas Campbell, cyber-security expert Jessica Barker and Cheltenham Science Festival’s Head of Programming Marieke Navin.

Jessica Barker runs cyber.uk. She is a leader in the human nature of cyber security, has been named one of the top 20 most influential women in cyber security in the UK and awarded as one of the UK’s Tech Women 50 in 2017. Equipped with years of experience running her own consultancy, she co-founded Cygenta, working with a variety of organisations from small creative agencies through to multi-national banks.

Dallas Campbell is one of the most versatile and well-travelled factual TV presenters working in the industry. He has filmed in some of the most extraordinary and challenging locations all over the world. Beyond television Dallas is an author, speaker and ambassador for STEM education. He is an Honorary Fellow of the British Science Association and this year won The Space Achievement Media Award at Sir Arthur Clarke Centenary Awards. His book Ad Astra: an illustrated Guide to Leaving the Planet charts the history, science and culture of human spaceflight.

This Festival is free to view on our YouTube channel so that everyone can explore the wonders of science.

Please support us if you can by making a donation. Your contribution will help us continue to bring science to live audiences, support emerging science communicators and deliver FameLab Academy – our year-round education programme aimed at inspiring secondary school students to become scientists.