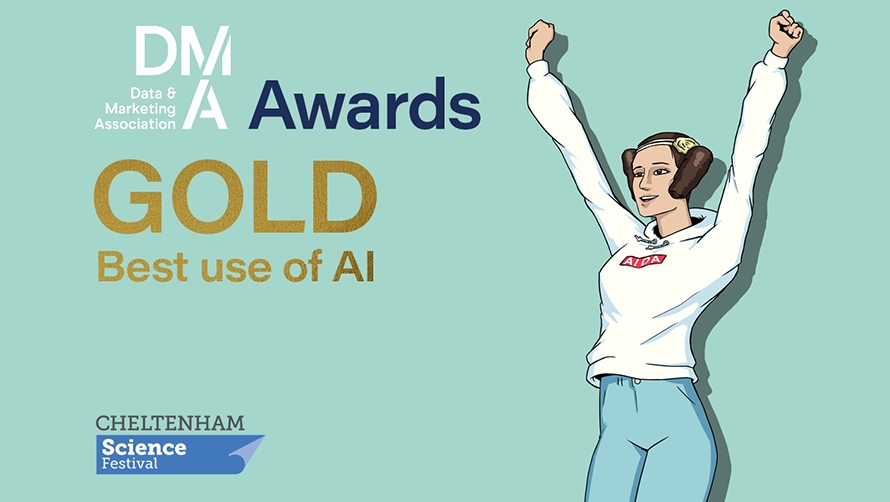 On Tuesday 3 December at the prestigious 2019 Data and Marketing Association Awards at Old Billingsgate London, Bristol Creative start-up Tiny Giant won Gold in the Best Use Of AI category for their collaboration with Cheltenham Science Festival.

Inspired by the festival’s Head of Programming, Marieke Navin, and her ambition to create the world’s first AI science festival curator, the team combined machine learning, design, film and social media to bring AIDA to life.

AIDA featured at the Festival launch in an interview for BBC Radio Gloucestershire, wrote an introduction for the Science Festival brochure, appeared on film at the festival and also harnessed her neural network powers to create her own successful event entitled ‘Introvert Narwhals’.

Marieke Navin said: “I couldn’t be more delighted that Tiny Giant’s work has been recognised in this way. Cheltenham Science Festival is all about bringing science alive for people of all ages and walks of life. Tiny Giant took my crazy idea of an AI Festival Curator and brought her to life in a way that captured people’s imagination. We are planning to bring her back for next year’s Science Festival, too.”

Richard Norton, Tiny Giant co-founder said: “We were thrilled when Dr Navin invited us to get involved back in January. But to win such a huge industry award takes this story to the next level. “We believe AI can be part of any compelling narrative to excite and inspire people. AIDA shows this to be so. She proves that a great idea gets even better when humans and machines work together. This isn’t the future. It’s the now.”