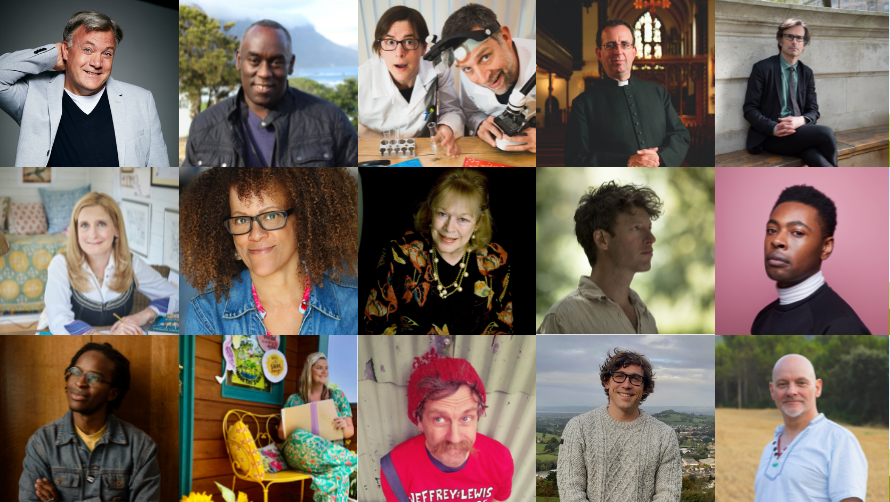 The Times and The Sunday Times Cheltenham Literature Festival is delighted to reveal a selection of early highlights appearing at the world’s oldest literature festival for its highly anticipated return to physical events this autumn. From Friday 8 to Sunday 17 October, the award-winning Festival will welcome audiences to all its venues across the heart of regency Cheltenham, as the vibrant spa town comes alive for a literary celebration like no other.

Welcoming over 1000 of the world’s very best writers, thinkers, and performers, the Festival continues to lead the way in showcasing the written and spoken word with something for everyone on this year’s unmissable programme. From the biggest new book releases to up to the minute political debate, there will be events covering history, poetry, art, sport, faith, philosophy, fashion, psychology, science, travel, nature, business and much more, plus a packed family programme that will inspire a love of reading in children of all ages.

This year’s Fiction programme celebrates the biggest names writing today alongside inspiring new voices winning the hearts of readers. Early highlights include award-winning Maggie O’Farrell, who will reflect on the six books that would accompany her to a desert island; Torrey Peters will be talking to Elizabeth Day about her Women’s Prize-shortlisted Detransition Baby; and Elif Shafak discusses her new novel, which deals with belonging and identity, love, and trauma.

Jeanette Winterson will tackle the implications of Artificial Intelligence on the ways we live and love, Colm Tóibín takes audiences on a breath-taking journey through the eyes of the literary titan Thomas Mann, Pulitzer Prize winner Colson Whitehead will discuss his new book Harlem Shuffle as well as the miniseries adaptation of The Underground Railroad, and Guest Curator Bernardine Evaristo will chair a panel featuring Mary Jean Chan, Paul Mendez, Andrew McMillan, and Richard Scott in a celebration of queer writers.

For crime aficionados, Pointless star Richard Osman will reflect on the phenomenal success of his debut as well as introducing the Festival audience to The Man Who Died Twice; Mick Herron joins a special event honouring the great John Le Carré to mark his final novel Silverview; Ann Cleeves will discuss the latest in her Two Rivers series, and Robert Peston introduces his explosive new thriller.

For fans of classic literature, Hamilton’s Giles Terera will explore the linguistic similarities between Shakespeare and Lin-Manuel Miranda; Countdown’s Dictionary Corner doyenne Susie Dent will be sharing a history of the English language, and the mighty Sebastian Faulks joins other writers to reflect on the literary life of Paris.

The leading American activist and scholar, Rebecca Solnit, discusses her new book Orwell’s Roses with Deborah Levy, who will also be in conversation with Guest Curator Joan Bakewell about her celebrated trilogy of ‘living autobiographies’.

Richard Coles will be offering insight into life, death, religion, and community; presenter Anita Rani will recall growing up as a second-generation British Indian woman up north while Nikesh Shukla considers the world into which his young daughter, as a mixed-race girl, is growing.

Allie Esiri will be championing the hidden gems of poetry as well as the much-revered poets who shaped us. The taboo-busting, poetry and prose prodigy Hollie McNish holds up a mirror to our everyday existence, and Dylan Thomas Prize winning Kayo Chingonyi will present his dazzling second collection exploring inheritance.

Adding some glitz and glamour to this year’s Festival will be the unapologetic Joan Collins giving a glimpse into the pages of her diary, star of the hit TV show RuPaul’s Drag Race UK, Bimini Bon Boulash will offer a behind-the-scenes look into the life of a drag queen, and the trailblazing frontwoman of Skunk Anansie, Skin will reveal what it is like to have been a global female icon over the past 25 years.

Former politician, TV personality and Strictly royalty Ed Balls will reminisce on his early life and love of food, Gyles Brandreth explores his family history against a backdrop of 1950s Britain, comedian Josh Widdicombe will take a trip down memory lane as he recounts the TV shows that shaped his childhood and Festival favourite Bob Mortimer returns to discuss his first autobiography, And Away….

For those wanting to make a difference, Ed Miliband will teach Festival goers how to fix the world, while Amika George – founder of the Free Periods movement – and entrepreneur and youth activist Jeremiah Emmanuel share their Activist Toolkit, and Musa Okwonga opens up about his experience as young black man studying at Eton College. Ruby Wax lifts the spirits and finds the positives in every day, Sarah Sands finds a way to de-stress in the modern age, and Richard Dawkins will share an electrifying celebration of science writing.

Critically acclaimed actor David Harewood will share his deeply personal, powerful and provocative exploration of race, identity, breakdown and recovery; Love Island and government ambassador for youth mental health, Dr Alex George will provide an invaluable guide for both physical and mental wellbeing; actor Evanna Lynch will deliver a raw yet intensely thoughtful account of her recovery from anorexia, and Hassan Akkad – Syrian refugee, cleaner and refugee rights activist – will share his journey of hope and connection.

For foodie fans, cookery stylist and writer Anna Jones will reveal how one pan can save the planet, Grace Dent and Katy Wix reflect on the central role of food in our lives and Ravinder Bhogal shares her favourite recipes from an immigrant kitchen.

Radio DJ and broadcaster Annie Mac and Candice Brathwaite, founder of Make Motherhood Diverse, share the life lessons they wish they had heard as young girls, and the extraordinary Michael Rosen will offer advice for those navigating the challenges that come when caring for a loved one.

Katy Hessel, art historian and podcaster, participates in a panel of women making waves in the art world; and author and photographer Caleb Azumah Nelson and Charlotte Jansen will share some of the most exciting photographers defining the art form today.

Footballing legend Peter Schmeichel relives his career prime at Manchester United, England rugby star James Haskell will share his voyage of self-discovery on retiring from international sport, and boxer and humanitarian Ramla Ali will offer her valuable lessons about what it takes to become a champion.

History buffs are in for a treat with this year’s Festival with military historian Max Hastings shedding light on Operation Pedestal, Alison Weir will conclude her sweeping Tudor saga with an introduction to the last of Henry VIII’s sextet of wives; and Antonia Fraser is in conversation with Allan Mallinson about her new biography on the nineteenth century pioneering women’s rights activist Caroline Norton. Sathnam Sanghera explores the impact of our imperialist history on modern Britain, and Fatima Manji offers a vital new perspective on Britain and the Orient.

The original Yorkshire shepherdess Amanda Owen offers a behind-the-scenes look at the life of a farmer in all seasons, and Poet Laureate Simon Armitage and Sam Lee will explore the nightingale in folklore, poetry, and song. Nepalese mountaineer Nimsdai Purja and former Royal Marines sniper turned adventurer Aldo Kane will share their stories of making the impossible possible.

This year’s bumper Family programme, invites children and young adults on an unforgettable literary adventure around our own world and beyond. Festival favourite Lenny Henry unveils his first book for children, Victoria Hislop returns to the Greek setting of her international bestseller The Island in her debut children’s book Marias’ Island and the nation’s favourite storyteller Michael Morpurgo introduces his first new novel in two years, When Fishes Flew. Fitness guru Joe Wicks joins Cheltenham to debut his first children’s book, The Burpee Bears.

This year, the non-fiction programme is bigger and better than ever, including four special events curated by Guest Curators The Week Junior. Sports icon Clare Balding presents ideas on how to develop resilience in the face of tough situations; CBeebies presenter Maddie Moate shares some mind-boggling facts about the stuff we use every day; and the original QI Elf, Molly Oldfield will be providing the answers to the most curious questions.

Word-play maestro Jonny Fluffypunk performs his new show, The End of the Pier Show, complete with poetry, puppetry, story, song, and a healthy dose of ramshackle anarchy; James Mayhew’s musical production Once Upon a Tune tells stories from the orchestra and stand-up poet Joshua Seigal performs from his new collection Yapping Away!. Spoken word poets Tongue Fu and Chris Redmond will showcase the power of poetry and music in the fight against climate change.

Little ones will be in for a treat with events from the extraordinarily talented Spanish author-illustrator Anuska Allepuz, Meet the Oceans with Caryl Hart, the award-winning illustrator and designer Dapo Adeola, plus blockbuster Supertato creators Sue Hendra and Paul Linnet will be bringing the laughs with their spooky new read Supertato: Night of the Living Veg. Tom Percival shares the craft of creating picture books and shows that even little people can have big feelings.

The Upper World, soon to be a Netflix film produced by and starring Oscar winner Daniel Kaluuya, Alex Wheatle will share his powerful historical novel based on the true stories of the eighteenth-century slave uprising, and Holly Jackson will unveil the final instalment in her killer A Good Girl’s Guide to Murder trilogy.