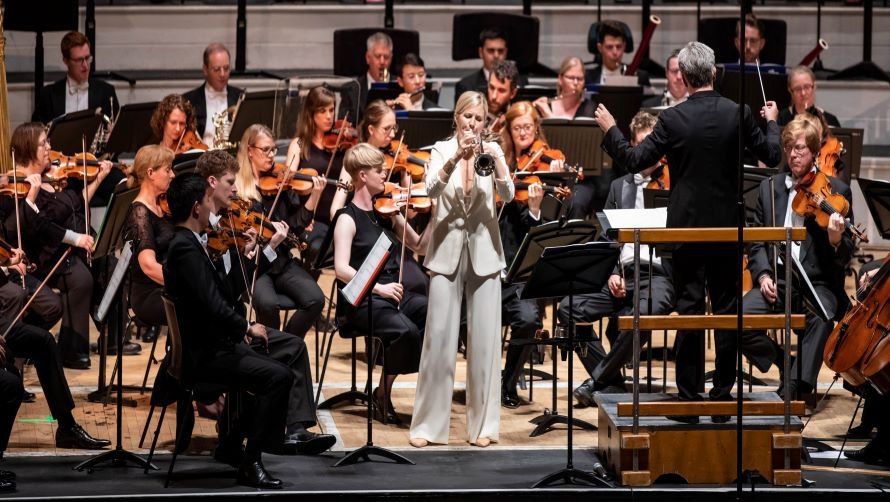 The Festival was honoured alongside the likes of Sir Ian McKellen, Pheobe Waller-Bridge for Fleabag and the Royal Opera in the 24th annual South Bank Sky Arts Awards.

Alison Balsom accepted the award on behalf of the Festival and gave a special performance at the socially-distanced ceremony at the London Coliseum. She said:

It was a real privilege to be able ask someone of Thea Musgrave’s calibre to write a piece for the Festival’s 75th Anniversary.

“Her involvement felt like the jewel in the crown of a year that included so many world leading creators and artists, a huge majority of whom were women. Musgrave wrote for the Festival in 1956, and an astonishing 63 years later she had clearly not lost her touch!” She added: “The UK performing arts industry has been the envy of the world for decades, centuries. But this year has been, there is no other way to describe it than, catastrophic for tens and thousands of artists and creatives, but also joyless for the millions of us who know that the Arts give us all something to live for. That the South Bank Sky Arts Awards have yet again been able to recognise more of these achievements, despite everything, is a ray of hope for the future.”

The Trumpet Concerto was co-commissioned by Cheltenham Music Festival, the City of Birmingham Symphony Orchestra in celebration of its centenary, and the Los Angeles Philharmonic. Thea Musgrave was chosen for the commission in this anniversary year as she was the first female composer to be commissioned by the Cheltenham Music Festival in 1956. It was written for the Festival’s Artistic Director Alison Balsom to perform and was based on a series of paintings by Scottish artist Victoria Crowe.

The awards continue their legacy as the only awards ceremony in the world to represent the entire spectrum of the arts, with categories for TV Drama, Classical Music, Theatre, Comedy, Dance, Film, Visual Art, Pop, Literature and Opera. The awards will be free for everyone to watch on Sky Arts, Freeview channel 11, at 8pm on Sunday 20th December.
Full List of Winners

Visual Art
Steve McQueen: Year 3
Tate Britain and billboards across London
A partnership between Tate, Artangel and A New Direction