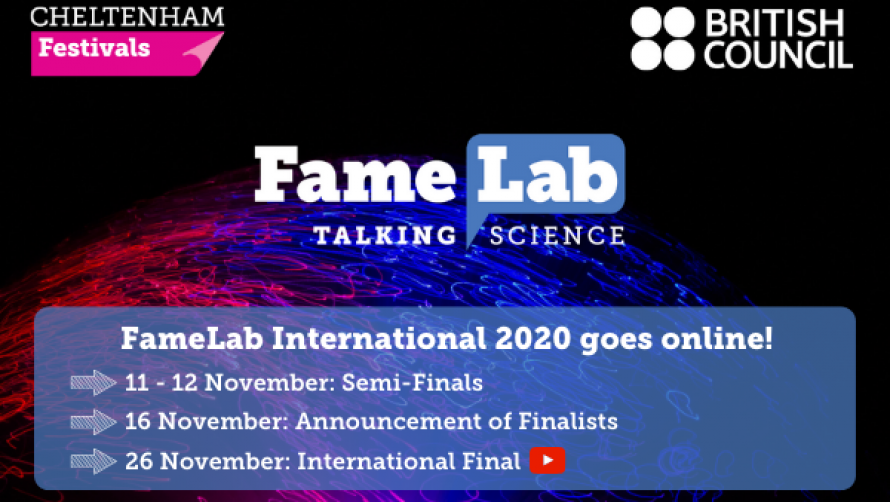 Dubbed the ‘World Cup of the science world’, the FameLab International science communication competition will be broadcast live on YouTube this month.

Researchers from the science, engineering, maths and technology fields representing 20 countries will compete on the virtual stage in a series of heats to vie for the title of world’s best science communicator.

The pressure is on as each competitor will have just three minutes to communicate their specialist knowledge with the audience in an accessible and engaging way – and will be watched by a global audience as well as a panel of expert judges including geneticist and BBC presenter Giles Yeo, structural engineer Roma Agrawal and science rapper Jon Chase.

Judges and audiences alike will cast votes for their favourite talks and determine who will take home the glory and coveted title of international champion.

In true international tournament style, the national representatives will first compete in semi final heats on 11-12 November, with the winners going head-to-head in the international final on 26 November which will be streamed on the FameLab YouTube channel.

Through the competition’s 15-year history, FameLab has become a much-celebrated part of the UK science scene with involvement from well-known scientists including Maggie Aderin-Pocock, Vivienne Parry and Jim Al-Khalili.

Every year the people behind the FameLab International Final – Cheltenham Science Festival and the British Council – join forces to bring together young scientists from all over the world as part of their shared charitable mission in education and public engagement in science. And communicating cutting edge scientific research and concepts in simple and accessible ways is more important than ever before.

Dr Giles Yeo, a geneticist at the University of Cambridge and presenter on BBC’s Horizon and Trust Me I’m a Doctor, and a judge in the FameLab International semi final said:

In these days of rampant anti-intellectualism, there has never been a more important time to celebrate excellence in science communication. I am excited to see what these talented scientists have in store!

The online events will be streamed live on the FameLab YouTube channel at www.youtube.com/famelab

Yesterday we saw some brilliant highlights from our second Friday at #CheltLitFest 2021! Catch up on some of the be… https://t.co/ynjWx8CAYj

Another wonderful day at #CheltLitFest comes to a close. 🤩 We're heading in to the last few days of the festival, s… https://t.co/j7jx8UREgp

Craig Brown won the Baillie Gifford Prize for Non-Fiction for his biography of The Beatles, One Two Three Four, and… https://t.co/pEudj6mSMo