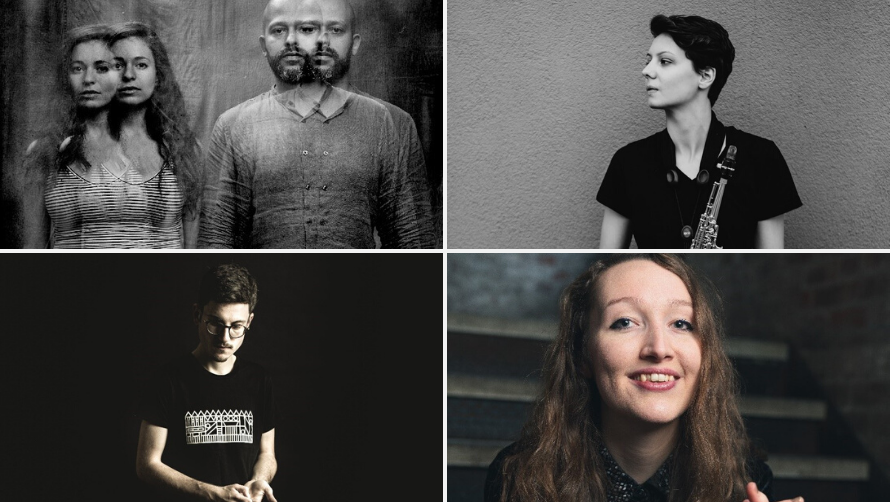 Four jazz artists have been commissioned to create ground-breaking new ways to present jazz at Festivals across England. They are Elliot Galvin, Faye MacCalman, Lara Jones and Witch ‘n’ Monk.

Each artist has been awarded a Jerwood Jazz Encounters Fellowship which will give them the chance to experiment with presenting jazz in unusual spaces and the digital realm. The 18-month programme will equip the artists with the skills and contacts they need to develop bold new work. Each Fellowship includes R&D funding, in-depth mentoring, a two-day Creative Lab hosted by Birmingham City University and specialist support from digital partner The Space.

The artists have already started developing ideas for site-specific or digital works for presentation at some of the leading music festivals in Europe in 2021 to include Cheltenham Jazz Festival, Manchester Jazz Festival, Oxford Contemporary Music and Sage Gateshead.

Pianist and composer Elliot Galvin said “I am fascinated by presenting music in new contexts and communicating work to audiences in new ways. This Fellowship will allow me to build on my creative ideas with the support and guidance of industry professionals to help me realise a new installation piece that is in dialogue with its environment, playing with context as much at content. This is something that I have worked on before, but never with the support network that this Fellowship provides, allowing the work to develop to its full potential.”

Faye MacCalman is an improviser, performer and composer who will use the Fellowship to explore issues around mental health. She said: “I’m really excited for the potential of this piece to grow and document the very human but still difficult to talk about experiences of mental health and to test the boundaries between music, spoken word and art. I want to learn more about making music for spaces where the public can engage outside of the usual jazz circuits or concert halls and developing new ways of working that can have a social impact.”

Lara Jones is a saxophonist, improviser, composer & collaborator who has been working on a series of compositions based on train stations and train journeys. She said: “Having become fascinated by the sounds of the stations/trains and the stories that are told, I’m interested in presenting my work in the place in which the music has been inspired and composed. I can’t wait to work with a space where it can become so intrinsic to the music, performance and audience that the music couldn’t exist without it.”

Witch ‘n’ Monk (formerly Bitch ‘n’ Monk) is the twinning of nonconformist Colombian flautist Mauricio Velasierra and anarchic soprano and guitarist Heidi Heidelberg. They said: “It is rare to have the chance to incubate a radical new artistic idea, with the support of a dedicated team of experienced and specifically chosen mentors. We are looking forward to developing a new format for musical performance that combines aspects of the promenade theatre experience, engaging with socio-political issues and a direct connection with the audience. As musicians experienced in live performance and recorded music, we will have the opportunity to explore some completely new artistic techniques, as well as building on those we have developed over many years, and recontextualise them in completely new settings.”

Jon Opie, Deputy Director of Jerwood Arts said: “Many congratulations to the five artists selected for Jerwood Jazz Encounters. Their ideas in response to the programme’s premise of fashioning new pieces for unusual spaces are really inspiring and I am excited for the journey of conversations and making that they are going to take over the coming eighteen months. The current situation is really tough on artists, so we’re pleased to offer this small reprieve from the gloom, especially as it is all about thinking laterally and ambitiously.”

Elliot Galvin is a pianist and composer whose work spans a variety of mediums. His main artistic vehicles are his trio, who have released 4 albums to date including ‘The Influencing Machine’ that was named one of the albums of the year in both Downbeat and Jazzwise, and his freely improvised solo piano project with which he recently released a critically acclaimed live album. Along with this he is a prolific composer, being commissioned by the London Sinfonietta, Ligetti Quartet, St. John’s Smith Square amongst many others. He is also a key member of the mercury nominated band Dinosaur and one half of the Binker Golding / Elliot Galvin Duo.
https://www.elliotgalvin.com/.

Faye is an improvisor, performer and composer playing saxophone, clarinet and voice with a boundary challenging ear. After growing up in the North of England, spending time at school in the Australian countryside and honing her ears as an improvisor in Montreal playing in tiny spaces with legendary instrumentalists, her music making quickly took on this uprooted and adventurous influence, crossing different sound worlds fearlessly and with a raw storytelling honesty.  Blending influences from jazz, folk-blues, experimental pop-rock and the avant-garde. Faye composes for and leads award winning, genre defying band ‘Archipelago’, as well as performing solo and in collaboration with likeminded artists across the UK and beyond. Faye is also placing a growing emphasis on the social impact of music making, and as a member of North East organisation ‘Creative Spaces’, providing workshops to isolated communities focused on making the therapeutic benefits of music accessible. In 2018 with an HMUK ‘Peter Whittingham Development Award’ Faye co-created a new residency ‘BETWEEN WAVES’ for female-identifying artists from around the UK to create new music with Archipelago in Newcastle. In 2019 Archipelago received support from BBC Introducing and were selected to perform at Latitude Festival, with Tom Robinson (BBC6 Music) including them in his festival highlights show.
https://fayemaccalman.wordpress.com/

Lara Jones is a saxophonist, improviser, composer & collaborator based between Leeds and London. She is a member of award-winning bands J Frisco and Beyond Albedo.  As a soloist, Lara has recently completed her place on Manchester Jazz Festival’s Hothouse Programme which commissioned her to write a new series of audio-visual based works for saxophone & electronics of which she is now receiving composition mentorship from Anna Meredith through Brighter Sound. Lara has performed across the UK & Germany at venues such as Royal Festival Hall, Cafe Oto, The Vortex, Kings Place & festivals such as London Jazz Festival, Manchester Jazz Festival & Tubax International Festival. She has supported many artists including Courtney Pine, Novelist, Portico Quartet, Laura Jurd & Matthew Bourne.
www.larajonesmusic.com

Witch ‘n’ Monk (formerly Bitch ‘n’ Monk) is the twinning of nonconformist Colombian flautist Mauricio Velasierra and anarchic soprano and guitarist Heidi Heidelberg. The driving force of the duo is a shared commitment to depict the multiverse, through an un-compromised, new musical language of composition and improvisation that travels fluidly between forms.
This multiverse is constructed with a collection of Latin American flutes radically manipulated with effects and extended techniques, anarchic soprano vocals that move seamlessly and suddenly between characters and timbres, analogue electronics and a jazz-punk guitar/bass hybrid. The essence of their collaboration is encapsulated in the name; dark and light, feminine and masculine, punk and Romantic, free-form and intricately composed. Exploring extremes and creating contrast are fundamental to their work and thus they tread upon the edges of genres. Celebrated in the jazz, contemporary classical and DIY underground music scenes they have played across the UK and Europe, at prestigious venues and festivals such as London, Manchester and Umea Jazz Festivals, Amsterdam’s Bimhuis, London’s Royal Festival Hall and Paris’ La Cigale, but also they produce avant-garde live film scores performed at communist Italian skateparks or among the thorn bushes in overgrown East London gardens.
Their previous releases ‘Fulafalonga’ and ‘We Are Peering Over’ were released in 2014 and 2016 to critical acclaim and their new album will be released in May 2020.
http://www.bitchnmonk.com/ 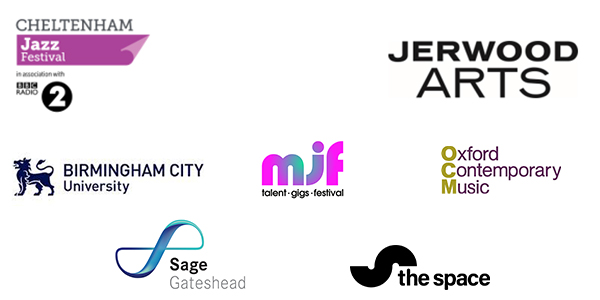