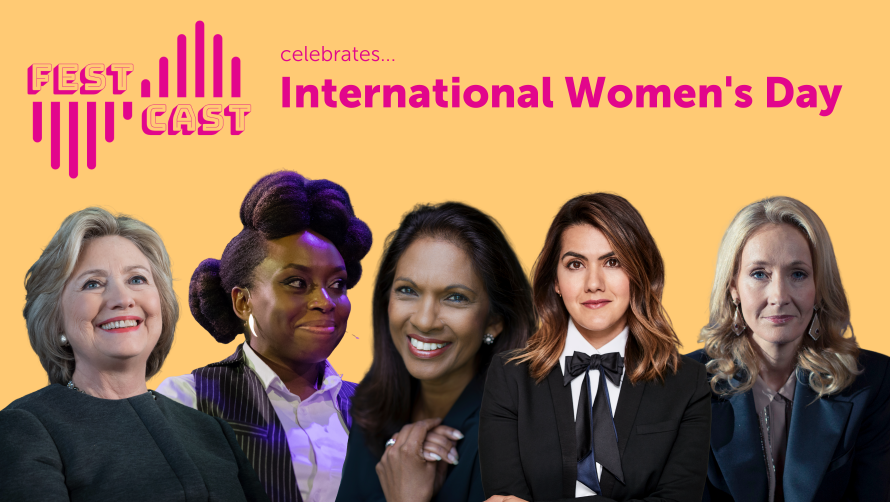 Our Festivals provide a stage for experts, innovators and critical-thinkers to tackle prominent issues within our society and discuss key cultural landmarks. FestCast was introduced by Cheltenham Festivals to make a carefully curated selection of these events accessible to all.

The podcast was launched with Hillary Clinton’s talk at the 2017 Literature Festival and since then we have striven to highlight the thought-leaders who have appeared at our Festivals. On International Women’s Day, we have picked out some memorable Festival talks delivered by women. From a presidential candidate to a justice campaigner who has taken the government to court and won – twice, it’s worth everyone taking a moment to listen to these talks.

In this intensely personal and revealing interview, Hillary Rodham Clinton discusses her memoir, What Happened. She gives a no-holds barred account of the experience of becoming the first woman nominated for president by a major party in an election marked by rage, sexism, exhilarating highs and infuriating lows, stranger-than-fiction twists, Russian interference, and an opponent who broke all the rules. The election of 2016 was unprecedented and historic. This is a candid account of that campaign and its aftermath from the extraordinary woman in the eye of the storm.

We were delighted to welcome award-winning author of Half of a Yellow Sun, Chimamanda Ngozi Adichie‘s to The Times and The Sunday Times Cheltenham Literature Festival in 2018. Her TED talk ‘We Should All Be Feminists’ started a worldwide conversation. On a rare UK visit to receive the PEN Pinter Prize, she speaks to Ellah Wakatama Allfrey about the remarkable impact of her work.

The anti-Brexit campaigner Gina Miller (Rise) has endured racist and sexist abuse as well as physical threats. Yet she continues to live according to her conviction that we must stand tall and lead the way if we truly believe in something. This conviction led her to taking the government to court twice, winning both times. Her first victory came in September 2017, when the Supreme Court ruled in favour of giving MPs a say over triggering Article 50 – the legal mechanism taking the UK out of the EU. Her second came in September 2019 when the Supreme Court ruled that Boris Johnson’s decision to suspend Parliament was unlawful. Editor-in-chief at Elle UK Farrah Storr (The Discomfort Zone) has proved that nothing in life is an insurmountable challenge and offers clear and inspiring advice about overcoming fear and realising our potential. In 2017 Storr was one of seven BAME women to be included on a list of the 1000 most powerful people in the United Kingdom.

In 1998, J.K. Rowling appeared at Cheltenham with her book about a certain boy wizard in a modest 160 seat venue. 14 years later, and this time filling 2,300 seats, we welcomed her back to discuss her first novel for adults, The Casual Vacancy, moving on from Harry Potter, her favourite characters and much more.

FestCast will continue to publish events of significance throughout the year, so make sure to keep your eyes on our social media channels and FestCast webpage You can listen to FestCast via:
Apple Podcasts Spotify Google Podcasts

about 23 hours ago
Back to Top