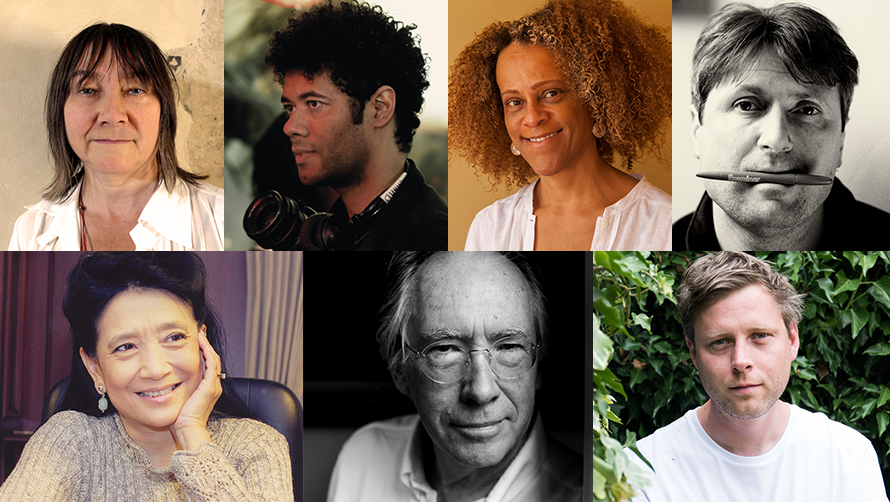 The Times and The Sunday Times Cheltenham Literature Festival is delighted to announce a selection of early highlights from the 70th-anniversary instalment of the world’s oldest literature festival.

FICTION, POETRY & FESTIVAL LATES
David Nicholls returns to the Cheltenham stage to introduce his highly anticipated new novel, Sweet Sorrow, and the award-winning Ali Smith will be discussing the third book in her seasonal quartet, Spring. Joining the literary line-up are Guest Curator Max Porter (Lanny), Ian McEwan (Machines Like Me), bestselling author Victoria Hislop talks about Those Who Are Loved, Philippa Gregory on her next period page-turner, Tideland, and Jessie Burton with her latest novel The Confession. Jojo Moyes returns to the Festival with her new novel The Giver of Stars, inspired by a remarkable true story, featuring five incredible women who will stay with you just as much as Lou Clark, Jojo Moyes’ unforgettable heroine of Me Before You.

Celeste Ng will share her literary influences and what it’s like to have your work adapted for television, and bestselling author of Apple Tree Yard, Louise Doughty, will set the scene for her latest Platform Seven. The astonishing Jung Chang (Wild Swans) will introduce her major new biography, Big Sister, Little Sister, Red Sister, and Candice Carty-Williams and Bernardine Evaristo will explore themes of feminism and race in modern-day Britain. Three authors Molly Case, Leah Hazard and Joanna Cannon – a nurse, a midfwife, a psychiatrist – share stories about what they have learnt about the NHS and how we care for patients. There will also be the opportunity to hear from The Times and The Sunday Times Literary Editors, Robbie Millen and Andrew Holgate.

Out-Spoken founder and Guest Curator Anthony Anaxagorou will be introducing his Dream Team, including Mona Arshi, Jack Underwood, Caroline Bird, Wayne Holloway-Smith and Kei Miller, and they will be further spoken word and poetry from brand new Poet Laureate Simon Armitage and the much-lauded Bang Said The Gun, and Tongue Fu.

STAGE & SCREEN
The Festival is thrilled to welcome music legend and fashion icon Debbie Harry with her first ever memoir, FACE IT – an arresting mix of visceral storytelling and stunning visuals. Status Quo front-man and founder Francis Rossi will share his tour adventures and his autobiography I Talk Too Much. Hilarious Richard Ayoade will take the Cheltenham audience from Peckham to Paris via his new book Ayoade On Top, and Julian Fellowes will reflect on the charm of Downton Abbey with award-winning drama producer and executive Gareth Neame ahead of the upcoming feature film. Musical composer and impresario Andrew Lloyd Webber talks about his life, career, music and love of cats with Richard Curtis. The legendary Lenny Henry discusses his new book and Who Am I, Again? and comedian Paul Merton discusses and reads from his favourite comic stories, from Ali Smith to PG Wodehouse.

CURRENT AFFAIRS, FAITH & SCIENCE
James O’Brien will present his amusing guide to talking to people with faulty opinions in How To Be Right… In A World Gone Wrong, and giving a glimpse behind the broadcast scenes will be Newsnight’s lead presenter Emily Maitlis and veteran Radio 4 presenter John Humphrys. Award-winning activist and journalist Caroline Criado-Perez will expose modern-day gender discrepancies in Invisible Women: Data Bias in a World Designed for Men, and one of world’s most renowned scientists, Richard Dawkins will expand further on atheism in Outgrowing God, Christie Watson reflects on twenty years in nursing, and David Nott will share his extraordinary experience as a trauma surgeon in the world’s most dangerous war zones, and there will be up to the minute political debate from The Times editor John Witherow and The Times and The Sunday Times journalists Danny Finkelstein, Sarah Baxter and Phillip Collins. Matt Chorley and Danny Finkelstein of The Times will join other panellists to discuss the Best and Worst Prime Ministers.

SPORT
As the World Cup kicks off in Japan, Welsh rugby legend Sam Warburton will take to the stage with his new autobiography, Open Side, cricketing hero Alastair Cook will discuss his stellar career at the crease, and endurance cyclist Emily Chappell will be reflecting upon the highs and lows of long-distance cycling.

Sign up to our enews so you don’t miss out on any further announcements and have a look at Membership for priority booking!

Jackie Bennett will introduce the gardens that inspired the greatest painters of history, lovers of classic fashion will be taken on a beautifully-illustrated tour through the V+A’s blockbuster DIOR exhibition by curator Oriole Cullen, and The Times’ Fashion Editor Anna Murphy will be explaining how not to wear black. Leading art critic Ossian Ward will give an insight into the fascinating art of the past and the Old Masters, and Aeham Ahmad will be playing the piano on stage as he shares his poignant memories of performing in the streets of war-torn Syria.

HISTORY & ANCIENT WORLD
Award-winning author, broadcaster and critic William Dalrymple will share the historical lessons learned from the brutal rise of the East India Company, Virginia Nicholson will discuss the fascinating era and experience of women in ‘Women in the Sixties: ‘How Was it For You?’ and exploring Queen Anne’s life and times will be The Favourite author Ophelia Field alongside Anne Somerset. Military historian Max Hastings talks about his new book and extraordinary military escapade Chastise: The Dambusters Story 1943, which is published in September.

NATURE, TRAVEL AND ADVENTURE
BAFTA winning naturalist, writer and television presenter Steve Backshall will share his adventures into undiscovered worlds, former British Army Officer and explorer Levison Wood will whisk the Cheltenham audience through a journey of his travels through the middle east in Arabia: A Journey Through The Heart Of The Middle East, Emma Mitchell will demonstrate how nature can mend us in her book, The Wild Remedy: 12 Months of Feeling Better in Nature, Luke Turner discusses his memoir Out of the Woods and The Sunday Times travel team, including Susan D’Arcy, will be sharing their expert knowledge.

FAMILY
The packed Family programme has more on offer than ever before including the legendary Malorie Blackman and her highly anticipated new Noughts & Crosses novel, presenter Dermot O’Leary and illustrator Nick East with the latest escapades of Toto the Ninja Cat, and some horrendously horrid fun with Francesca Simon. There will be crime capers with Guest Curator Robin Stevens, best-selling author Cressida Cowell will present a world of mythical creatures and powerful magic, there will be adventure galore with Helen Skelton and Candy Gourlay, plus more from the likes of Danny Wallace, Dougie Poynter and Konnie Huq.

For little ones there will be family fun with multi-award winning Oi Puppies! duo Kes Gray and Jim Field, mesmerising storytelling from Atinuke, and Elmer creator David McKee will be celebrating the 30th birthday of the much-loved patchwork elephant. Aspiring writers can take top tips from the best in the business, as well as attend workshops on everything from fairy-tale animation to detective move making, plus the Festival is hosting its first ever ‘Big Family Book Quiz’ to test book knowledge, creativity and nonsense know-how! And if that’s not enough for YA fans Juno Dawson, Holly Bourne, Matt Abbott, Jenny Downham and Dean Atta will be taking to the Cheltenham stage.

Read more about the Family Programme

FESTIVAL THEME AND 70 YEAR CELEBRATIONS
As part of ‘Seven at Seventy’, this year’s Guest Curators lend their unique voices and wealth of expertise to the programme, including a unique set of discussions exploring some of the key social and cultural touchpoints from the past seven decades, including the novels that have defined our times.

Literature festivals around the world are also set to join the anniversary celebrations with seven leading festivals each selecting a writer to join Cheltenham’s 70th programme.