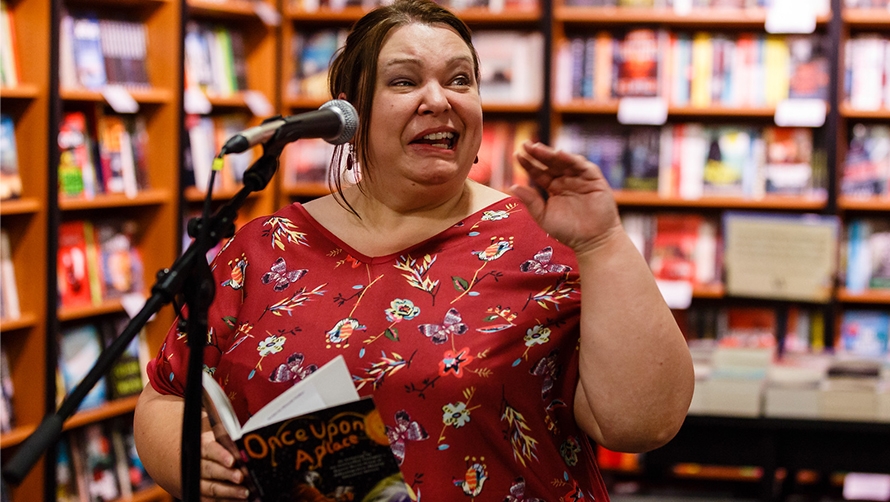 The finale of the 75th Cheltenham Music Festival is to be a Community Opera created and performed by people of all ages who live and work in West Cheltenham. Performances will take place on Sunday 14 July 2019 in Cheltenham Town Hall.

In the first of a series of blogs from the creative team, Librettist Miranda Walker gives us a peek behind the scenes.

Miranda is an author, scriptwriter and lecturer. She has written for local and London Theatres, for children’s television Gigglebiz (CBeebies) and Diddy TV (CBBC), for flagship comedy shows The Now Show and The News Quiz on Radio 4, as well as story and educational books – including the much-loved Wishing Fish Clock book about the famous clock in Regent’s Arcade.

It all starts with the writer, so everyone’s waiting for me to shape the opera before they can spring into action. I’ve been holding weekly writing workshops with children from two primary schools, St Thomas More Primary and Hester’s Way Primary, and one secondary school, All Saints Academy.

I came to the sessions with a loose idea that the opera might be about a family moving into Hester’s Way, with a primary school-aged child, a teenager, a mum and a grandad. We have worked on each section of the story using role-play exercises, writing exercises and watching clips from musicals to get ideas.

The primary school children have contributed ideas for the younger character, with a more sophisticated take from the secondary school aged pupils. I came away with lots of written work from the sessions which I then sift through and weave together. It’s a difficult process deciding what to include, but it’s generally ideas, emotions and viewpoints from the younger children with some lyrics from the older ones.

Michael Betteridge, the composer and I have been going back and forth, refining some elements. The biggest decision we have is whether to have the opera sung through or to include ‘spoken’ dialogue. I’ve written rhythmically throughout and included rhymes, so we do know that it would be recited rather than said.

At the community choir rehearsals, I’ve taken the opportunity to ask the choir to help with the storyline of the mum and grandad characters. They are working on the grandad song at the moment. I’ll be on hand throughout the process if any changes are needed as the opera develops.

My hope for the community opera is that it will foster a love of writing and music in the participants and a belief in themselves. The belief that the arts are for them and can tell their story.