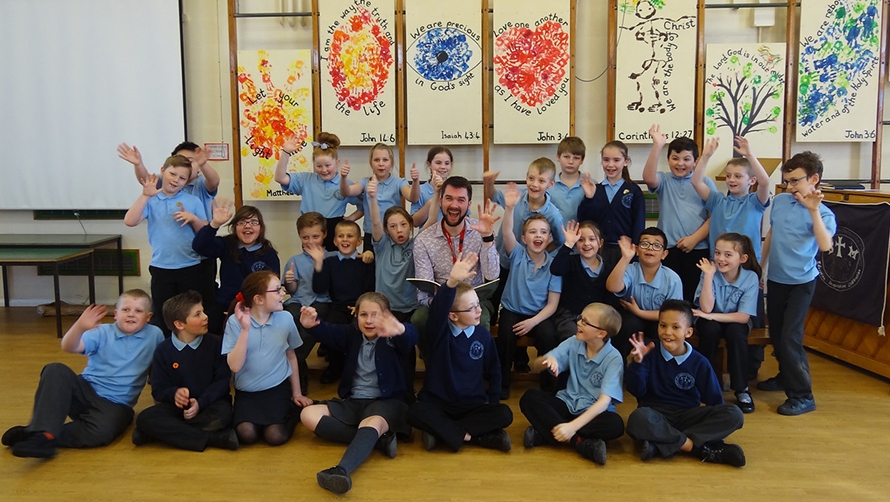 But in just seven months’ time the same group will perform in the finale of the 75th Cheltenham Music Festival on Sunday 14 July 2019 in Cheltenham Town Hall. They will form part of the Opera Chorus for Cheltenham Music Festival’s Community Opera performing alongside school choirs, professional singers and instrumentalists, and young players from the Gloucestershire Academy of Music’s Inspire Ensemble.

The Community Opera has been awarded funding from the Big Lottery and the Foyle Foundation to tell the stories of people who live and work in Cheltenham West (known informally as Hester’s Way). It is the culmination of a cross-arts, intergenerational project over four years which has been planned in consultation with groups and individuals who live and work there. It will build on the work of two previous projects in the community – a song-writing piece (Going for a Song, performed at the 2015 Cheltenham Music Festival) and a storytelling piece (A Way With Words, performed in Hester’s Way as part of Cheltenham Literature Festival in 2016). This long-term project is part of Cheltenham Festivals’ commitment to making the Festivals more accessible to people whose opportunities to engage with local arts and cultural activities are limited.

80% of respondents from previous projects reported a positive impact on their confidence or wellbeing through taking part and 82% of respondents said they would be more likely to engage with arts and culture than before. A community choir member said “We’re so excited about the collaboration for the end of the Music Festival next year. Best thing that’s happened in our area for a very long while.”

Philippa Claridge, Education Manager at Cheltenham Festivals, said “Community leaders in Cheltenham West have told us that social isolation and lack of opportunity are issues for their community. As people of all ages come together to write, compose and perform their own opera, we hope they will build stronger relationships, learn new skills and challenge some pre-conceived ideas about this part of town.”

Work has already begun on creating the libretto for the opera (working title A Likely Story). Author and scriptwriter Miranda Walker will devise the title and story in collaboration with the community itself. She is holding weekly writing workshops with children from two primary schools, St Thomas More Primary and Hester’s Way Primary, and one secondary school, All Saints Academy and will also incorporate ideas from the community choir.

Composer Michael Betteridge has previously worked with members of the community on Cheltenham Festivals’ Going for a Song project where he is fondly remembered and has been welcomed back with great enthusiasm. One previous participant said: ‘It has definitely been instrumental in helping to forge strong links within the local community. It has brought us all closer and stronger as a community, and included all of the community no matter what age.”

The Community Opera’s creative team is:

Librettist – Miranda Walker is an author, scriptwriter and lecturer. She has written for both local and London Theatres, for flagship comedy shows The Now Show and The News Quiz on Radio 4, as well as story and educational books – including the much-loved Wishing Fish Clock Book about the famous clock in Regent’s Arcade.

Composer – Michael Betteridge has worked on previous Festivals projects in Cheltenham West, bringing his huge experience collaborating and composing with community groups across the UK and abroad. Michael specialises in songwriting and opera, and has developed projects with BBC Philharmonic, London Symphony Orchestra, Opera North, and many more.

Director – Bryn Holding is an actor, writer, and director, including being an Associate Director of Hammerpuzzle Theatre Company. He has recently worked with the Everyman Theatre directing The Irving Studio Christmas show, as well as writing and directing On The Mend, commissioned to commemorate the centenary of the WW1 armistice.

Conductor – Glyn Oxley is musical director of the Gloucestershire Academy of Music and works with talented young musicians in the county. He has established a new Gloucestershire Youth Chamber Orchestra called Inspire for Grade 8 plus young musicians, which runs in conjunction with Cheltenham Music Festival.

Soloist and Singing Leader – Gina Baker studied singing at the Royal Birmingham Conservatoire and now works in the Learning and Participation Department of the Birmingham Contemporary Music Group. She is passionate about outreach through music, running choirs in prisons and volunteering for the Choir With No Name for people affected by homelessness.

Why Cheltenham West?
Two wards in Cheltenham West are in the 10% most deprived in England. Local councillors and community leaders have spoken of low aspirations and limited opportunities, particularly amongst young people. This can come as a surprise to those living outside the town and even some within it, who associate Cheltenham with top independent and grammar schools, horse-racing, GCHQ and world-class Festivals. The area is geographically cut off from the rest of the town and few residents have their own transport. The Community Opera will bring this hidden-away community into the spotlight in Cheltenham’s most iconic building, the Town Hall.