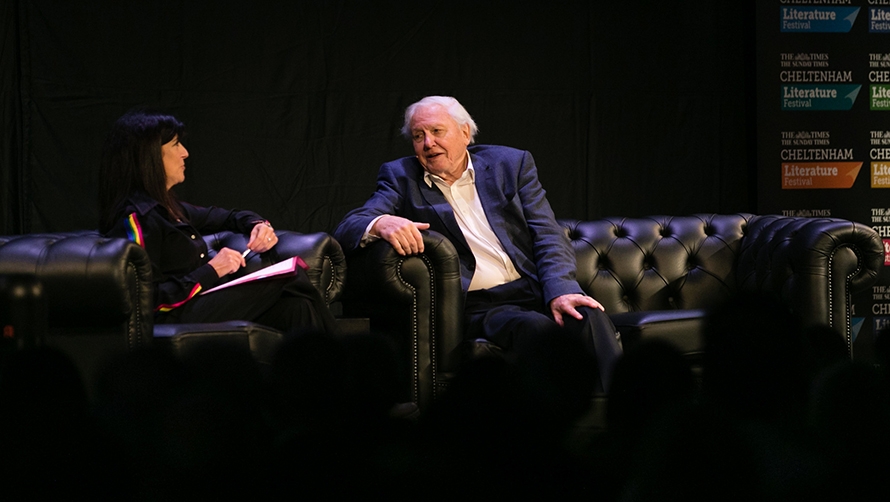 Yet again, The 2018 Times and The Sunday Times Cheltenham Literature Festival has broken box office records. More importantly, participants at the 10-day festival praised its inclusive atmosphere. Speakers including Susan Calman, Jo Brand, Lyse Doucet and Chris Hoy talked of the importance, in today’s increasingly polarised society, of listening to each other and just being kind. The sentiment was summed up by Richard Curtis who said: “[Cheltenham Literature Festival is] a universally positive, excellent, educational, optimistic and interesting event and it is a kind of model. If people say to you the world’s not wonderful, this is kind of wonderful, so, thank you all very much.”

Head of Programming Nicola Tuxworth said: “The record numbers attending this year’s Festival shows that our appetite for the written and spoken word is stronger than ever. Our most diverse programme yet filled venues both large and small for unique experiences such as David Attenborough’s only festival appearance this year, and events featuring authors from across the globe. We introduced our audiences to a new generation of the best new voices on the literary scene and were proud to showcase the work of Cheltenham authors in our Locally-Sourced and Cheltenham Writes collections.”

Late night literary revelry included a Jungle Boogie in anticipation of David Attenborough’s appearance at the Festival and an expanded Lit Crawl which saw around 1,300 people enjoying spoken word, music and comedy in the pubs, cafes and clubs of Cheltenham.

More than 20,000 people each weekend came to enjoy a host of free family-friendly activities including a Beano Trail, storytelling and costume characters alongside events with top children’s authors like Jacqueline Wilson, Michael Morpurgo, Greg James and Chris Smith.

Over 9,000 school children from 97 schools experienced the Festival, receiving inspiration from writers and illustrators including Anthony Horowitz, Pamela Butchart, Kieran Larwood and Tongue Fu. And 100 teachers attended the launch event of Year 3 of the Festival’s flagship Reading Teachers = Reading Pupils outreach project, enabling teachers and their pupils in 58 schools to rediscover the joy of reading. The number of participating schools has almost doubled since the project was launched just over two years ago.

• 141,500 tickets issued
• Over 760 authors on site
• The Festival stacked up 6,720 volunteer hours
• 96 articulated lorries are on their way to dismantle the Festival Village

Top stories from the Festival

• David Attenborough revealed that the animal language he would most like to learn is dolphin.
• Richard Curtis admitted his first choice for Four Weddings and A Funeral was not Hugh Grant, but Alan Rickman.
• A four-letter literary debate on Mr Darcy vs Heathcliff made the headlines.
• Chris Hoy called for an end to “them versus us” between car drivers and cyclists.
• Tristram Hunt argued that museums should increase entry prices at weekends.
• The great-granddaughter of suffragette Emmeline Pankhurst, Dr Helen Pankhurst, made parallels between the #MeToo movement and the fight for women’s rights 100 years ago.
• And Festival volunteer litter-picker John Wood Philips achieved his ambition of appearing on stage at the Festival in a specially curated series of locally-sourced Cheltenham Writes events.

Dates for next year:
4 -13 October 2019
The Times and The Sunday Times Cheltenham Literature Festival
#cheltlitfest @cheltlitfest
The world’s oldest literature festival celebrates its 70th anniversary in 2019. With over 500 events, the programme spans the best new voices in fiction and poetry alongside literary legends, celebrated chefs, sporting icons and stars of stage and screen. It offers the perfect family day out to inspire and entertain toddlers to teens. There’s global street food and free pop-up events galore with festivities continuing late into the night.