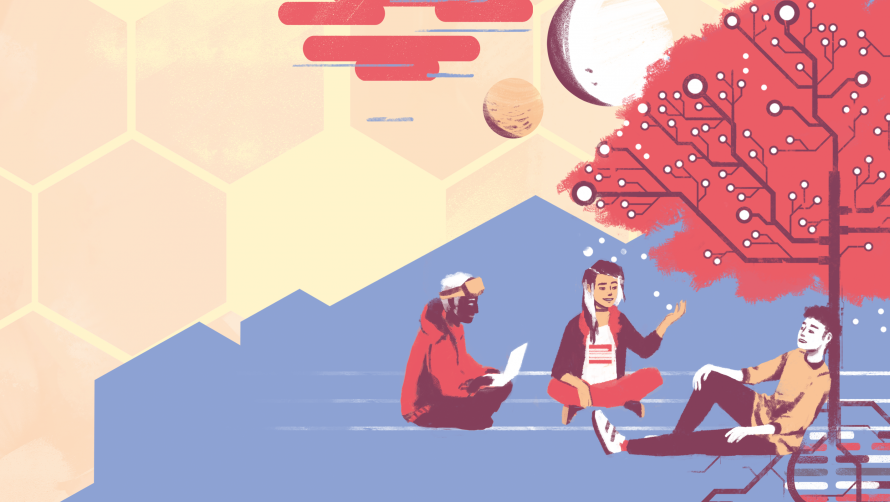 The theme of the Festival is Connected : Divided exploring what connects and divides us as a species – from personal relationships, health and language to the law, global politics and the universe. Over 280 leading experts in the fields of psychology, biology, technology, engineering, anthropology, health, current affairs will make their way to Cheltenham for the six-day event.

The Festival’s brand-new Cyber Zone will bring the public face to face with innovative organisations, including DeepMind – the world-leading AI research company – who will hold workshops and share their research. Other organisations posing challenges and hosting debates in the Cyber Zone will be GCHQ, Cyber Security Challenge, Cyber Discovery, the University of Gloucestershire and more.

• On Thursday 7 June Cheltenham audiences will be joined by tens of thousands of people across the globe to watch the live-streamed final of the world’s leading science communication competition FameLab International as 29 national finalists battle it out for the title.

Interactive zones in the Festival Village and …around town programme on the streets of Cheltenham are aimed at engaging all ages and inspiring the next generation of scientists and engineers. The Discover Zone is a huge free interactive space in Cheltenham Town Hall, the MakerShack a hub of creativity and invention, and new this year is The Sphere with a health and lifestyle focus. Visitors can also explore the EDF Energy Zone, discover new technologies in the GE Pavilion and try hand-on activities with Hartpury Science Hub, become Woodland Trust Nature Detectives, follow the free Science Trail created for the Festival by BBC Focus Magazine and a decipher a cryptic challenge in the Cyber Trail. During the week over 6,500 school children are expected on site to take part in these activities, with many more children visiting with their families over the weekend.

Elsewhere on the Festival site, the RAF Falcons will perform a sky diving display, celebrating the centenary of the RAF. There’s also an inspiring photo exhibition of women in STEM with the chance for visitors to add their own photos to the display.

Mark Lythgoe talks for the first time on pioneering research into brain surgery using nano scalpels to remove cancer or alter brain circuits and on recent findings on the glymphatic system and how it is affected by alcohol, sleep and exercise.
With two NHS Proton Beam Therapy Centres due to open this year, Simon Jolly sheds light on this cutting-edge technique used to cure cancer.
Looking to the future of IVF, 40 years after the world’s first test tube baby, are Chair of the British Fertility Society Jane Stewart and scientist Kay Elder.
Festival Chair and BBCR4’s Inside the Ethics Committee presenter Vivienne Parry leads a debate on when should we stop treating sick children. Consultant oncologist Sam Guglani talks about his new novel Histories based on life in a hospital. James Betts and Jeff Davies sort out fasting facts from fasting fiction and Olympic coach Steve Ingham explores pushing the human body to extremes and gives top tips on workout success.

Mathematician Hannah Fry discusses the science of attraction with eHarmony’s Chief Research Scientist Jonathan Beber and psychologist Viren Swami.
Timandra Harkness and Emma Byrne explore the Science of Swearing; and Andrea Sella and pathologist Carla Valentine will dissect a chunk of fatberg live on stage.
The Science Museum will bring some of their recent highlights to the Festival: curator Ben Russell talks about their blockbuster Robots exhibition and Museum Director Roger Highfield chairs a panel of experts applying pioneering virtual reality technology to healthcare.
With plenty of fun alongside the serious stuff, the Festival will be exploring the Science of Marvel and Star Wars, Frankenstein, gin and cider, there’s also comedy with Robin Ince, the ever-popular Over-Ambitious Demo Challenge, Science Festival Variety Night and an Algorave where the crowd dance to music generated live from algorithms.

Events co-curated by the British Psychological Society include talks on loneliness with Rory O’Connor and Manuela Barreto, involved in the BBC Loneliness Project; Chris Armitage and Ian Taylor on willpower and Catriona Morrison, Jeremy Reffin and MP Jess Phillips about reclaiming the internet from abusive social media trolls.
Royal Society book prizewinner and psychologist Cordelia Fine, science journalist Angela Saini and TV presenter Javid Abdelmoneim talk about gender wars in science; the brain is revealed by neuroscientists Sarah Jayne Blakemore (Secrets of the Teenage Brain) and Dean Burnett (The Happy Brain), Professor of Social Interaction Elizabeth Stokoe gives tips on the art of conversation and Sandi Mann explains why we should embrace boredom.

Marine biologist Helen Scales (Eye of the Shoal) gives us insights into what she’s discovered about octopuses; Lizzie Daly talks about Living with Elephants; anthrozoologist John Bradshaw explores the human/animal bond with Pets As Therapy Chair Anne Clilverd and her therapy dog Cesc; Steve Brusatte talks about The Rise of the Dinosaurs, and Jules Howard and Hana Ayoob tell fascinating stories about exotic animals escaped into the wild around the British Isles.

On Saturday and Sunday a varied children’s programme for ages 4 to 12+ has a range of fascinating topics, from the science of sweets to exploring the universe with Lego as well as coding, bugs, probability games and a Capture the Flag challenge. Gross-out topics sure to delight small people include bacteria, FrankenAnatomy and the science of pee and poo. Favourite CBeebies presenter Maddie Moate and Doctor Ranj, BBC Gastronaut Stefan Gates and Blue Peter stalwart Steve Mould will all be there.