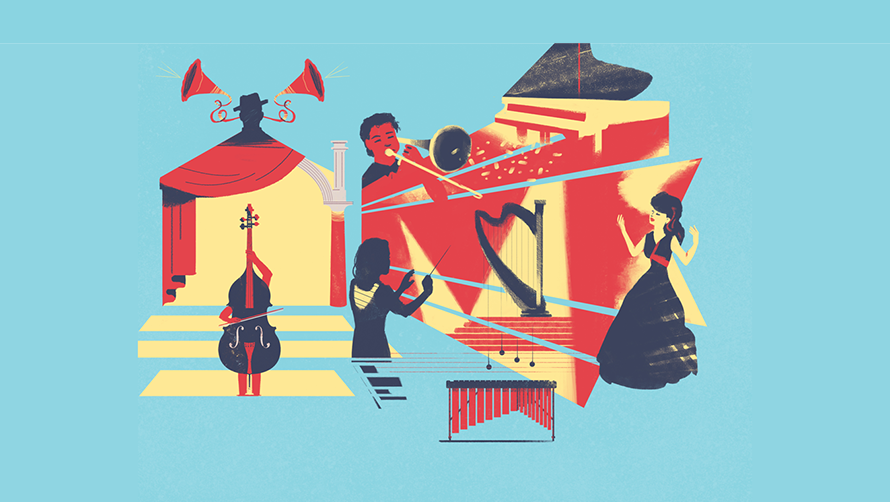 The Festival marks the anniversaries of Leonard Bernstein, Claude Debussy and Hubert Parry as well as the world premières of Joseph Phibbs’ chamber opera, Juliana, a retelling of Hansel & Gretel by Matthew Kaner and Simon Armitage; four Quartet premières by the Ligeti Quartet; and Festival commissions from Gavin Higgins, Eddie Parker, Kenneth Hesketh and Richard Blackford.

Based in some of the Cotswolds’ most spectacular spaces, the Music Festival includes star performers in Cheltenham Town Hall, the very finest chamber music in Pittville Pump Rooms, and roof-raising choral concerts in Gloucester Cathedral and Tewkesbury Abbey. Central to the Festival’s work is providing a platform for a new generation of artists, championing new music and attracting new audiences, particularly children and families, to experience classical music.

I am thrilled to be taking over the helm of Cheltenham Music Festival as we announce a particularly fantastic line up for 2018 – bringing the very best of classical music to the broadest possible audience, and making it possible for both Cheltenham and the wider community to experience this great art form in all its glory.

As well as picking up the reins of the Festival, the virtuoso trumpeter is giving a free master class. Trumpeters of all ages are invited to apply for a public one-on-one coaching session with the triple Classical Brit award winner at Cheltenham Town Hall on 8 July.

The Hallé conducted by Sir Mark Elder perform Elgar’s Symphony No. 1 and a selection of Mozart and Richard Strauss songs with soprano Louise Alder, winner of the Audience Prize in the BBC Cardiff Singer of the World (4 July).

Sir András Schiff leads the Choir and Orchestra of the Age of Enlightenment from the keyboard in an all-Haydn programme including the Harmoniemesse (8 July).

The Kolobov Novaya Opera Theatre of Moscow, with a nearly 100-strong orchestra, massed chorus and soloists, perform three masterpieces of the Russian operatic canon including Borodin’s Polovtsian Dances in their only UK concert performance of 2018.

Following a sold out series in 2017, the Festival’s BBC Young Musician Rush Hour concerts return with more of the finest young musicians of recent years. 2014 finalist, Sophie Westbrooke, 2012 winner Laura van der Heijden and one of the 2018 BBC Young Musician finalists will perform.

The Carice Singers, a vocal ensemble of sixteen young professional singers conducted by George Parris, give their Cheltenham debut in a programme of Sir Hubert Parry performed in his home church, Holy Innocents in Highnam (5 July).
Cheltenham is also showcasing harpist Richard Allen, a current member of the Countess of Munster Musical Trust’s young artist scheme, for a recital in St Swithin’s Church, Quenington (12 July) and a double recital by two Gloucestershire Young Musician award-winners (11 July).

The Festival has over twenty world premières this year include a new chamber opera Juliana by Joseph Phibbs based on Strindberg’s Miss Julie with Nova Music Opera conducted by George Vass at the Parabola Arts Centre at Cheltenham Ladies College (15 July).

Poet Simon Armitage retells Hansel and Gretel in an extended lyrical poem with chamber music by Matthew Kaner performed by the Goldfield Ensemble, shadowplay and puppetry by Clive Hicks-Jenkins, and produced by Kate Romano (7 July).

Loose Tubes flautist and composer Eddie Parker holds a life-long passion for the music of Claude Debussy and brings together a unique new ensemble of twelve outstanding jazz and classical performers including singers Brigitte Beraha and James Gilchrist for Debussy Mirrored (13 July).

A new work Gursky Landscapes by Gavin Higgins is performed by the Carducci Quartet and David Cohen (6 July), The Berkeley Ensemble perform Kenneth Hesketh’s The Singing Bone (14 July) and Martyn Brabbins conducts the strings of BBC NOW in a world première of Kalon by Richard Blackford (6 July).

Now in its sixth year, the Festival’s Composer Academy invites twelve of the most outstanding early-career composers to have their compositions work-shopped, performed and recorded and to receive advice from industry experts, resulting in around a dozen world premières (13-14 July).

Colin Riley’s touring multi-media song cycle, In Place, inspired by Robert McFarlane’s Landmarks stops off at the Festival on (8 July).

A strong choral thread running through the Festival includes The King’s Singers in Tewkesbury Abbey covering everything from Thomas Tallis to Paul Simon (9 July); an atmospheric late night concert by the Choir of Keble College, Oxford in a programme of Dupré Fauré and Duruflé (5 July); the Choir of King’s College Cambridge sing psalm settings including Bernstein’s Chichester Psalms and Parry’s I was glad (11 July); massed choirs take over Gloucester Cathedral for Berlioz’s monumental Grand Messe des morts (14 July); and The Bevan Family Consort (including sopranos Sophie and Mary Bevan, siblings and cousins joining together for one night only) perform contemplative liturgical works in All Saints’ Church, Pittville (13 July).

Last year, Cheltenham threw away the classical concert rule-book for Classical Mixtape and, due to popular demand, it’s back. Short pieces of live music from different stages in Tewkesbury Abbey surround the audience in uninterrupted, sequenced bliss, as they stand, sit or lie where they like (10 July).

Composer and arranger, Robin A Smith, Music Director for 2012 London Olympic Opening Ceremony, brings together the most recognizable soundtracks from blockbusters, TV favourites and best-selling games in Thrones, Swords and Fantasy for a thrilling live concert experience in Cheltenham Town Hall (7 July).

For families, The Nutcracker and I by pianist Alexandra Dariescu and ballerina Désirée Ballantyne is a new and magical story with beautiful hand drawn digital animations. (14 July). And there are workshops on Tchaikovsky’s ballet The Nutcracker with the Royal Academy of Dance.

Landing in Cheltenham Town Centre is the Philharmonia Orchestra’s Virtual Reality Orchestra, inviting visitors to experience Beethoven’s Fifth Symphony intercut with scenes from interstellar space shot by Google’s VR team in partnership with NASA. The performance celebrates the 40th anniversary of the launch of the Voyager 1 and 2 spacecraft, and the Golden Records they each carried. (Daily free drop-in sessions.)

Running alongside the Festival is a year-round education and talent development programme offering inspirational opportunities for young people including workshops in schools in the month preceding the Festival and the hugely popular Concert for Schools and Music Explorers during it. The Festival’s flagship music education programme, Musicate, enables teachers and their pupils to work alongside inspirational conservatoire students to share and develop a deep love of jazz and classical music. Also this summer, schools will have access to five new, freshly trained gamelan tutors. Subsidized workshops are available throughout the summer term with this great music-making resource.