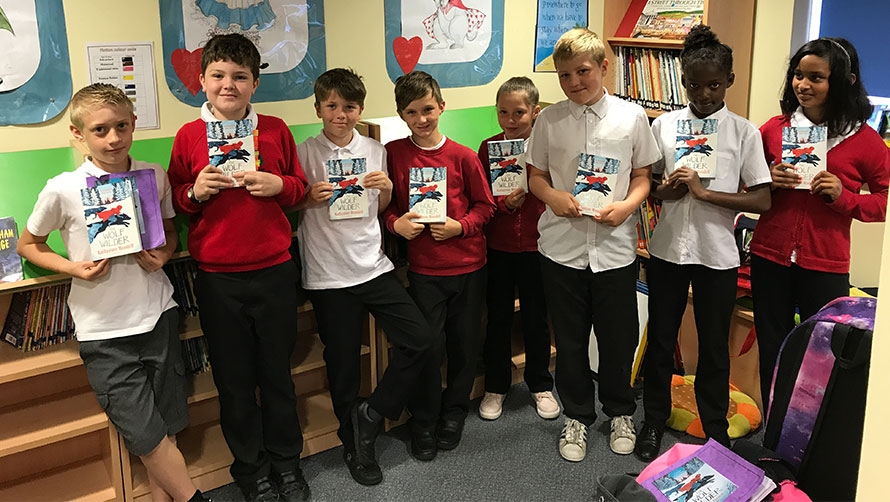 Chris Brown, Reading Teachers = Reading Pupils participant and teacher at Linden Primary School, tells us how he used #ReadingTeachers book, The Wolf Wilder by Katherine Rundell to inspire more children to read ‘off their own back’…

After analysing the Easter data from the Year 5 cohort, there was an enormous disparity between the children that were scoring highly on their reading papers and the ones that were not achieving similar results. Unsurprisingly, when looking closer, it was the same divide between the children who read often and widely in their own time and share books with adults in their reading records. Reading for pleasure has always been an issue for us as a school (as with many, if not most), but we have yet to come across a solution! The challenge was set: enthuse and inspire more children to read ‘off their own back’ in order to continue to raise standards in reading.

After meeting with the Year 5 teachers it was decided that we would start a book club with a focused group of Year 5s. The criteria for being invited included being a ‘target child’ for reading and their home/school reading record being signed sparsely, coming to the conclusion that these children would benefit from having a positive collective experience of reading with a reading role model.

Through being introduced to the text (and falling in love with it on the RT=RP sessions) it was decided that we would read The Wolf Wilder by Katherine Rundell as it was felt that it contained beautiful imagery, challenging vocabulary, a female protagonist and an action-packed narrative- ensuring there was ‘something for all’ as a hook to the text.

All was set on the morning of the first session, I was apprehensive as the letters and invite had been well received by the children- but there was still something inside me nagging at the fact that we were asking children who don’t read for their own leisure to come in before school to read a book with a teacher that wasn’t their own that made me think that nobody would attend. Thankfully, as 8 o’clock approached, children started ringing the bell at the school entrance to be let in: 9 out of 10 of them to be exact!

Over the course of the weeks, the attendance remained healthy. I would set the children off with a couple of chapters to read and a ‘thinking task’ relating to a key event that they would encounter and this would start our discussions at the start of the following session. The questions would be mainly based around empathy so that it was accessible for all and to give the children more reason to reflect on each character, therefore making deeper emotional links and thus their engagement with the text.

Although the main objective was just for these children to read and enjoy a book, the inner teacher in me felt that it would have been a wasted opportunity to not delve deeply into the authorial intent and beautifully crafted imagery of the tale. I therefore included another element each week that ended up working particularly well: each child would choose a word, phrase or sentence that they particularly ‘liked’ as they came across it in the text. They would make a note of this along with the page reference and then share with the group in the subsequent meeting. Over time, this became the most successful part of the club as the children would, scaffolded by myself, start to really unpick the authorial intent and gain a deeper insight into the text and why it is so successful.

At the club’s conclusion asked the children to anonymously write down on a scrap of paper how likely it would be for them to read a book over the summer for no other reason than their own pleasure. The results were extremely pleasing, with only two of the nine children writing ‘maybe’. Whether they did or not is another question, but in terms of inspiring reluctant readers to enjoy a book, the RT=RP selection of Wolf Wilder certainly had an impact on a key group of children at Linden Primary.