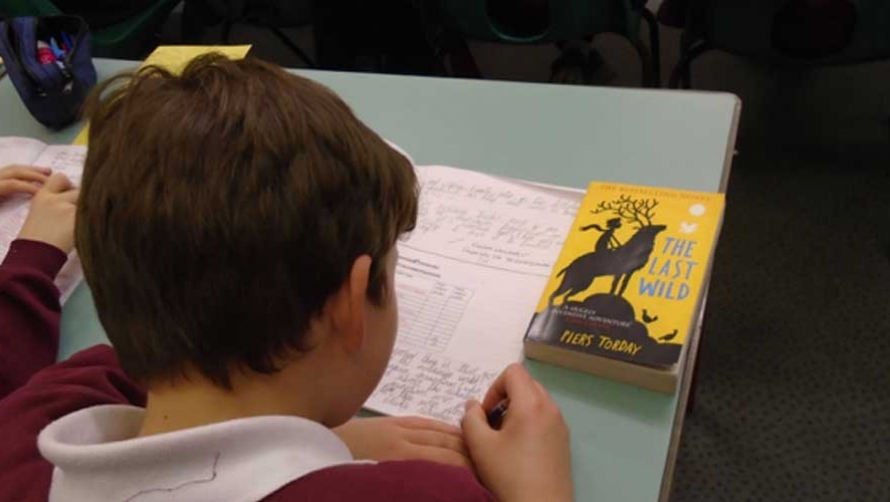 Our wonderful, voluntary school librarian, Granny Maureen, and myself (Y5/6 class teacher) were really inspired by ‘The Last Wild’ by Piers Torday and the resultant conversations we had in the Stroud branch of the Reading Teachers = Reading Pupils network, and we felt that the book had so much opportunity that we needed to use it as a lead book in our English planning. This meant that it edged out our current topic (Out of This World, a space topic) from any English links, but the success of the book has not had any detrimental effects of the parallel success of the topic: the children are more than capable to carry their enthusiasm of both book lead English lessons and main topic. This was illustrated by the girl who brought in a model of Spectrum Hall from The Last Wild one day, and a model of the solar system the next. A good topic and a good book to hang good English lessons on are not mutually exclusive!

So we decided to read the first half dozen chapters of the book as part of Guided Reading, twisting the group idea to a whole class thing and giving children a copy of the book for each pair. Just having copies of the book excited the children, and we spent a great deal of time looking at the cover and blurb and making predictions. One child said that the red eyes of the stag on the cover were creepy, and this became the basis of lots of interesting predictions. I had, previously, shared copies of the map at the start of the book with the children in an earlier descriptive writing session, so it helped that they had seen the map before, and were excited to see it again in a different context and one they had already ‘bought into’ with their own predictions.

To say that the children were inspired and intrigued by this book is an understatement. Following this first week of immersion into the text, six children (including two reluctant readers) turned up at school with their own copy of the book. Some had read on and were encouraged not to provide ‘spoilers’, while others had only reread what we had previously read as a class: they were adamant that we should discover the story together!

The Last Wild then became a central focus in our English lessons, and proved to be very versatile in how we could use it. The highlight of lessons was the whole class read and the deep discussion following this. We took part in drama activities (the children loved speaking like Dr Fredericks, and improvised meetings between him and other linked characters, including a scene where he met Kester’s dad and told him that Kester had been lost), and this moved onto developing an impersonal style of speaking and later letter writing. We enjoyed descriptive writing opportunities using the settings from the early parts of the books, and loved the characterisation of the animals through their speech. This had a knock-on effect on the way my pupils used speech in their own writing: they discovered that by having characters speaking differently in their own styles, they could develop so much characterisation.

One of my pupils wrote a definition of the ‘Red Eye’ as part of a glossary for the book:

Red Eye – This perplexing virus has made animals, fruit and vegetables extinct. According to our professional scientists, it is extremely challenging to find out how the outbreak happened so swiftly. As well as this, the symptoms are very unusual. The eyes of the being turn red before its body and flesh simply turn to mush.

After this, the vegetables and fruit that weren’t contaminated were deep-frozen and rationed. After this ran out, it occurred to the governments that there was no food left and nothing they could do. Mankind began to starve.

My pupil followed this up with a linked definition of Factorum and how they ‘saved’ mankind.

Some people say that reading a novel over more than six weeks with a class is too long to sustain their interest. We are six weeks in and half way through the book and the children are desperate to find out what happens next. They love reading, discussing and writing about The Last Wild, and I, as a teacher, love the opportunities that the RT=RP meetings have offered me.

We are still loving it and it’s still making a difference!