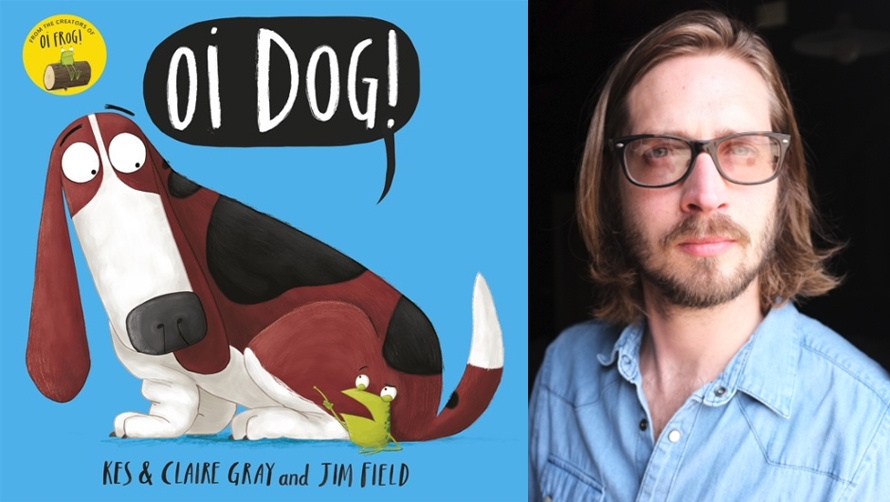 Award-winning illustrator Jim Field has been chosen as the featured illustrator for The Times and The Sunday Times Cheltenham Literature Festival Family and Primary School programmes.

Around 25 illustrators were considered by the Literature Festival team and Jim Field was picked from a shortlist of five. Jim is an award-winning illustrator who was the UK’s sixth bestselling illustrator of 2016. Oi Dog!(Hodder Children’s Books) by Kes & Claire Gray and illustrated by Jim was a number one in the pre-school chart last year

Loraine Evans, Children and Young People’s Programme Manager at Cheltenham Festivals said: “Jim’s artwork will be used on all our Family and Schools marketing material in print, on line and on site. Whilst we were overwhelmed by the talent of the illustrators submitted, Jim Field was elected unanimously for his bold, funny and distinctive style. Jim’s work is well loved by children and parents and we believe his illustrations will encourage our audiences to dive into our Festival brochures”

About Jim Field
Jim was born and brought up in Farnborough. He drew from a very early age, with a burning ambition to ‘make cartoons’. He studied animation at Hull School of Art and Design, graduated in 2002, and made his way into the animation industry, working as a director for Partizan in London. Meanwhile, he was also penning his way as a freelance illustrator, working for editorial publications. His first picture book, Cats Ahoy!, written by Peter Bently, won the Booktrust Roald Dahl Funny Prize in 2011 and was nominated for the Kate Greenaway Medal. Oi Frog! and Oi Dog! with author Kes Gray have been bestsellers: Oi Dog! was a number one in the pre-school chart.
Jim has also illustrated books with Rachel Bright, Michelle Robinson, Michael Broad, Jeanne Willis, Steve Cole and comedian David Baddiel.
He lives in Paris with his wife and daughter. @_jimfield

Oi Frog! written by Kes Gray and published by Hodder Children’s Books
Winner of the Bishops Stortford Picture book Award
Nominated for the Kate Greenway 2015
Shortlisted for Peters Picture book of the year 2015

6-15 October 2017
The Times and The Sunday Times Cheltenham Literature Festival
#cheltlitfest
For ten days in October over one thousand of the world’s finest writers, thinkers, performers and leading opinion formers descend on Cheltenham to celebrate the joy of the written and spoken word. The world’s oldest literature festival (est. 1949), the event continues to inspire debate with over 500 talks, workshops and performances touching upon subjects as diverse as history, politics, sport, food and fashion. Coinciding every year with the political conference season, the festival offers the very best from a whole world of ideas.
This year the Festival will explore the theme of British identity, asking: “Who Do We Think We Are?” – asking key questions around British Identity in 2017 and celebrating our rich literary heritage.