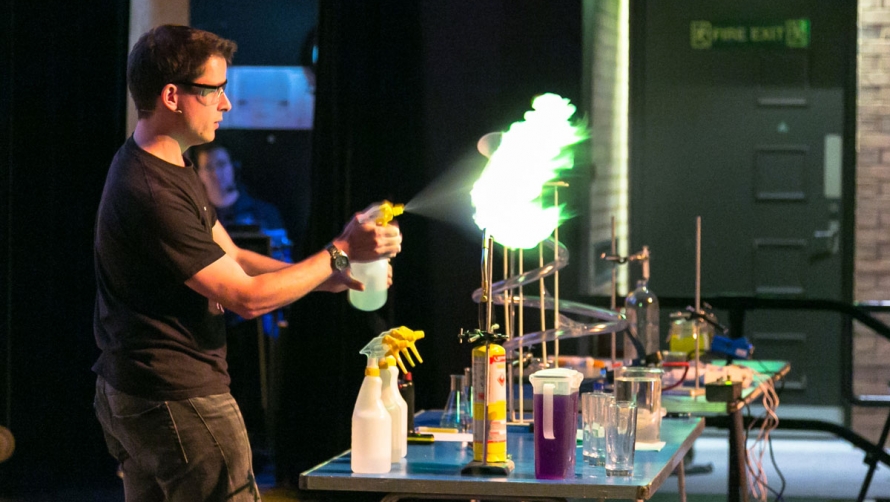 Hundreds of pupils from across the county enjoyed a free science and maths extravaganza today, thanks to The Honourable Company of Gloucestershire and The Times Cheltenham Science Festival.

This morning at The Bacon Theatre in Cheltenham, with the help of coloured flames, disappearing animals and a dash of quantum physics, two brilliant science presenters sparked pupils’ excitement about science, technology, engineering and maths (STEM).

As well as enjoying science at its most spectacular, the year eight and nine pupils learned more about the benefits of studying these subjects at GCSE.

Patrick Brooke, member of Court at the Honourable Company of Gloucestershire, said:
The Honourable Company of Gloucestershire is committed to developing this county’s future achievements. The annual Schools’ Lectures are one of the county’s most exciting cultural fixtures and we’re delighted to see our original concept come to fruition in such a marvellous way, helping young people access science outside of the classroom, hopefully encouraging Gloucestershire’s next generation of STEM graduates.

Ali Mawle, Director of Education at The Times Cheltenham Science Festival, said:
Some people can find ‘science’ daunting, but the Festival gets people engaged with science in new and exciting ways. These annual free lectures for local schools are a fantastic opportunity for us to bring the magic of The Times Cheltenham Science Festival direct to students who might not otherwise get to discover science in such exhilarating and innovative ways.

Suze dispelled the myth that science has to be done in a fancy lab, uncovering some of the amazing science materials that you can find in your own home, while Karl explored the science of light and colour.

Covering biology, chemistry and physics, Karl’s talk examined everything from why we see different colours to the search for extra-terrestrial life.

Produced by The Times Cheltenham Science Festival in partnership with the Honourable Company of Gloucestershire, the free Annual Lecture has amazed over 2,500 local Key Stage 3 pupils with two hours of entertaining, inspiring and mind-expanding science since it started in 2010.

Dr. Suze Kundu is a Teaching Fellow in the Department of Materials at Imperial College London. She has been doing science communication, outreach and public engagement for the last five years, and loves sharing the secret science of everything around us, through live demo lectures, workshops and on TV and radio.

Karl Byrne is an award winning science communicator, who has written and presented science shows around the world. Karl has a background in virology and molecular biology and a keen interest in all areas of science. His goal is to show the importance and relevance that science has in everyone’s lives. He is a guest lecturer in science communication and also trains and advises scientists throughout Europe on how to better communicate their research with the public.