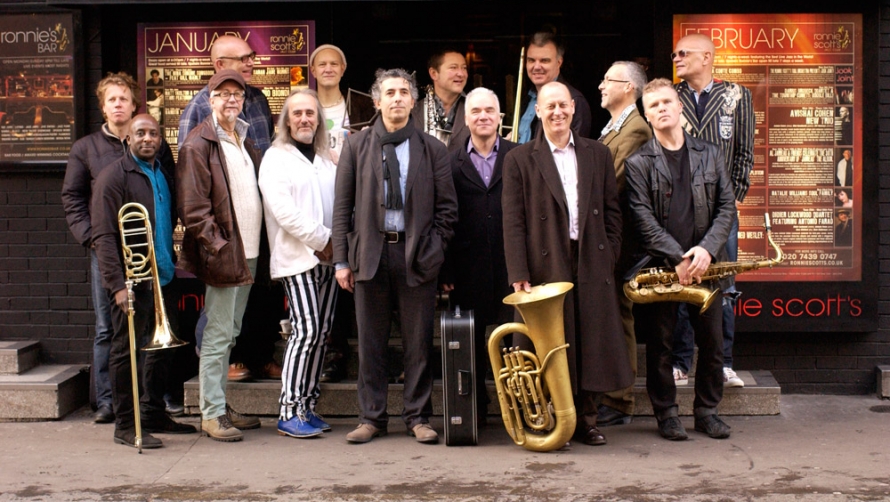 At Cheltenham on Saturday 3rd May Loose Tubes will be playing their first gig since 1990 and this is going to be a very special event. They will be playing some of their old repertoire but also new material commissioned by BBC Radio 3.

Loose Tubes were a hugely influential band in the 1980s and were, alongside the other UK big band The Jazz Warriors, at the forefront of a great boom in British Jazz in that decade. For me, they were particularly important; in the early 80s I had returned from teaching English abroad and had become a member of the Board of Birmingham Jazz. Loose Tubes played their first concert in London in 1984 emerging from a collective of young musicians rehearsed by the late composer Graham Collier.

Loose Tubes’ concerts were great fun, the music combined wonderfully fresh compositions drawing on different styles of music and the band featured a number of new solo voices in British jazz. Above all, there was a sense of irreverent humour in the way the music was presented in concert. We were proud to be the first promoting organization to present Loose Tubes and the Birmingham area became a place where they had great success, playing the old Triangle Arts Centre on a CMN tour, the Alexandra Theatre and the Solihull Festival. Loose Tubes were a major force in bringing audiences back to jazz after a rather difficult period in the 1970s.

I became a camp follower and remember spending a whole day listening to them at the Tring Festival; that was the year the much missed Bracknell Festival moved to Tring and the band played both as the 21 piece big band and in various smaller groups for the entire day. Also, I still have somewhere a cassette of their late night performance at the Proms in 1987 when they were introduced by a rather pompous sounding Simon Bates and the band’s spokesperson Ashley Slater, referred to the orchestra that had played the main concert as the ‘support act’.

The band launched the careers of many of the significant jazz musicians in UK today: Django Bates, Iain Ballamy, Mark Lockheart, Steve Berry, Julian and Steve Arguellles, Tim Whitehead and Ashley Slater. Most of these players have appeared at Cheltenham at least once in the last few years. Loose Tubes also had a great trumpeter in Dave DeFries, but he has disappeared from the scene, making his home in Spain, I believe.

The band made three albums: Loose Tubes, Delightful Precipice and An Open Letter. This third one was produced by Teo Macero, who had produced all Miles Davis’ later albums. Teo said of the band ‘these guys are into real compositions, real melodies, not just being super-hip. I haven’t seen a young band in the US who want to do things like that’.

The band broke up in 1990 largely due to the difficulty of making a 21-piece big band financially viable. Its influence lived on in other occasional big bands, especially in Django Bates’ Delightful Precipice and StoRMChaser, and Mark Lockheart’s medium size Scratch Band.

I greatly look forward to hearing the band again, the old and the new compositions and, above all, that great sense of delight in the music.

In the late 80s, as jazz made a rare dent on popular consciousness, the brashest, brightest sounds came from Loose Tubes. Gleefully mixing Swing and Ska, Dolphy and Zappa…