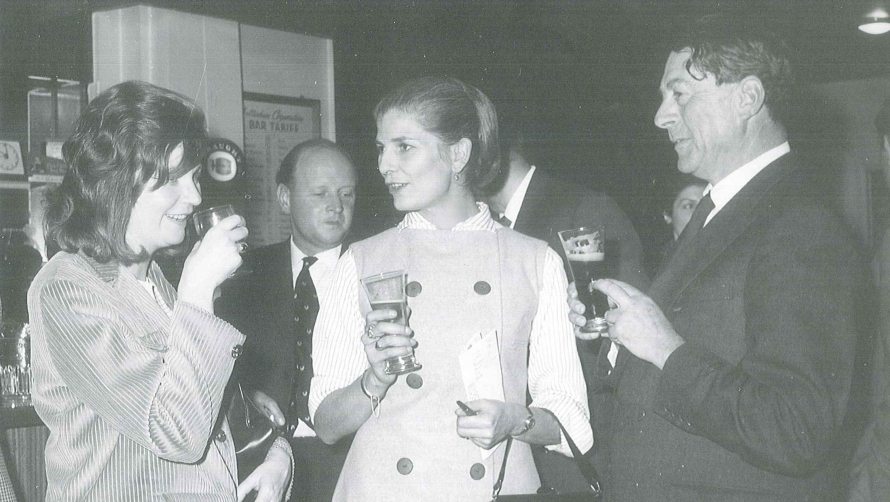 You should be thanked, for the miracle you worked. The whole of Cheltenham should be driven out in the streets and made to cry “Ta!” in one great shout.

Elizabeth Jane Howard first visited Cheltenham Literature Festival in 1956 as one of its resident ‘Young Writers’, shortly after the publication of her second novel The Long View. She did three events at the Festival, including facing Cecil Day Lewis in a debate on education.

In 1962 Festival Founder and Chairman John Moore invited Jane (as she was known to her friends) to return to Cheltenham as the Festival’s Artistic Director. She was full of fabulous and ambitious ideas, including having a literary zoo in the gardens, music and dancing in the Pump Rooms, and a spectacular fireworks finale over the lake.

To fund her Festival, Elizabeth Jane Howard approached the newly launched Sunday Telegraph who became the Festival’s first media partner. This sponsorship enabled Jane to bring Carson McCullers and Joseph Heller across from America, and Romain Gary from France, to join Kingsley Amis on a panel to discuss ‘Sex in Literature’. The event generated several memorable quotations, including Heller’s quip on censorship: ‘I think a line does have to be drawn, but I don’t know anyone I’d trust to draw it.’

During the Festival, Jane rented a house in St George’s Road so she could personally host the invited authors and her brief time at the Festival’s helm was celebrated as a great success. Laurie Lee wrote to her: ‘You should be thanked, for the miracle you worked. The whole of Cheltenham should be driven out in the streets and made to cry “Ta!” in one great shout.’

Jane was admired by all who met her, and both Laurie Lee and Cecil Day Lewis would become her lovers. Jane and Kingsley would also have an affair, and their later marriage made them London’s most celebrated literary couple until their bitter separation 18 years later.

Sir Kingsley was Jane’s third husband, following brief marriages to Peter Scott, the son of the Antarctic explorer Robert Falcon Scott, with whom she had a daughter, and the actor and writer Jim Douglas Henry.

Elizabeth Jane Howard published 14 novels and three works of non-fiction. Her most popular work, The Cazalet Chronicles, has sold more than one million copies. The four first Cazalet Chronicles (The Light Years, Marking Time, Confusion and Casting Off) were adapted into a 45-episode Radio 4 drama last year. The fifth instalment in the series was published in November.

Jane’s first career was as a theatre actress and a BBC broadcaster during the Second World War. As well as books, she also wrote television scripts, such as Upstairs, Downstairs, and short fiction. She also edited several anthologies, including The Lover’s Companion in 1978.

Some content for this post was taken from ‘A History of the Cheltenham Literature Festival’ by Nicola Bennett.

about 21 hours ago
Back to Top