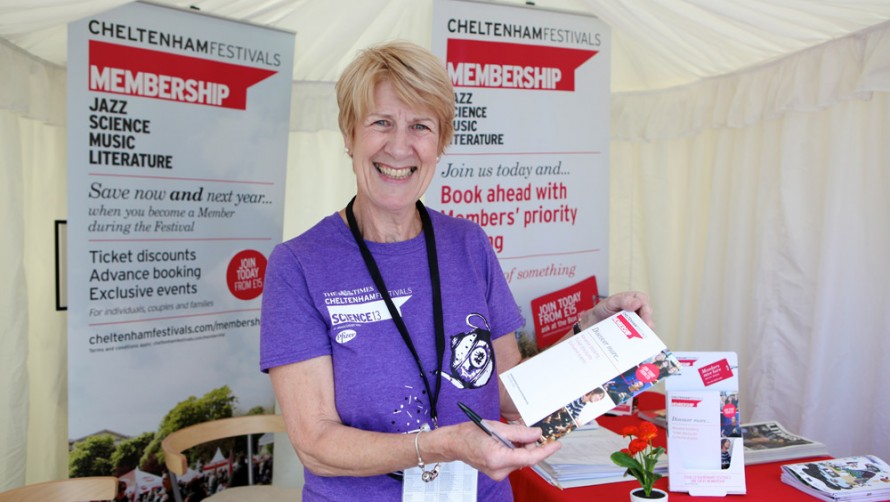 There are some great stories being told at Cheltenham Science Festival, but not all of them get aired inside a white marquee.

Every year the festival recruits over 100 volunteers to tear tickets, fetch chairs, man roving mics and carry out just about every other job you can imagine a festival might need doing. Each year these delightful individuals are robed in T-shirts of a different – but equally bizarre – colour. This year’s crop were easy to spot in a fetching shade of lilac.

The first volunteer I ran into who had a story to tell was Katie Steckles, who works with stand up mathematician Matt Parker. She told me how she’d been talking with one speaker before the public were let in to her talk.

“We were just talking about her bathroom tiling, it was kind of mundane to begin with,” said Steckles. The speaker was explaining how she had wanted her decorator to use square tiles, but stick them to the wall as diamonds – that is, at a 45degree angle. Apparently the decorator had been complaining about all the wastage and extra effort this required, as he had to cut the all the tiles into triangles to create a straight edge at the end of the tiling pattern.

But then the decorator told the speaker that, actually, “this was nothing” compared to a guy he worked for a few weeks earlier. That guy had wanted him to basically create a mosaic of tiles, all of different sizes that never, ever repeated. “I think his name was Penrose. First name… something beginning with ‘R’…”

It was then that Steckles realised she was hearing about Roger Penrose’s bathroom designer. Penrose, a famous mathematician, had his bathroom tiled in the very Penrose tiling that he invented in the 1970s.

“Being pretty into maths, I just thought that was so cool,” she said.

Soon afterwards I bumped into James Rushworth, a medicinal chemistry student from University College London. Rushworth had spent a fair bit of time on roving mic duty,taking questions from the floor during the festival’s talks.

“So I was on mic duty,” explained Rushworth. “There was a kind of old looking guy sitting in the audience with his hand up, and so I passed the mic to him. But then I was like – flippin’ heck, that’s James Watson.”

As a medicinal chemist, Rushworth had heard about how Watson discovered DNA since he was a boy.

“Yeah, I was pretty star-struck,” he says. “I went up to him afterwards with some clever question in mind, but when I said hello and he looked at me, I kind of just dried up and forgot what I was planning to say. It was quite a moment for me!’

What I haven’t told you so far is that I volunteered at Cheltenham for three years running.

So do I have any stories myself? Well, there was this one time when I was asked to drive Heston Blumenthal to his hotel. Could I get the enormous black automatic rented Lexus the volunteers were using into reverse? Well, yes. But in my nervous anxiety it took me at least four agonising minutes; two of which were spent encouraging myself under my breath.

“Come on Josh, you remember how to do this..”

Luckily for me Blumenthal didn’t say much during our short journey, so – if he did think I was mentally unbalanced – at least he was polite enough not to mention it.

Josh Howgego completed a chemistry PhD in 2012 but then escaped the lab to write about science instead. You can catch up with him on Twitter at @jdhowgego.