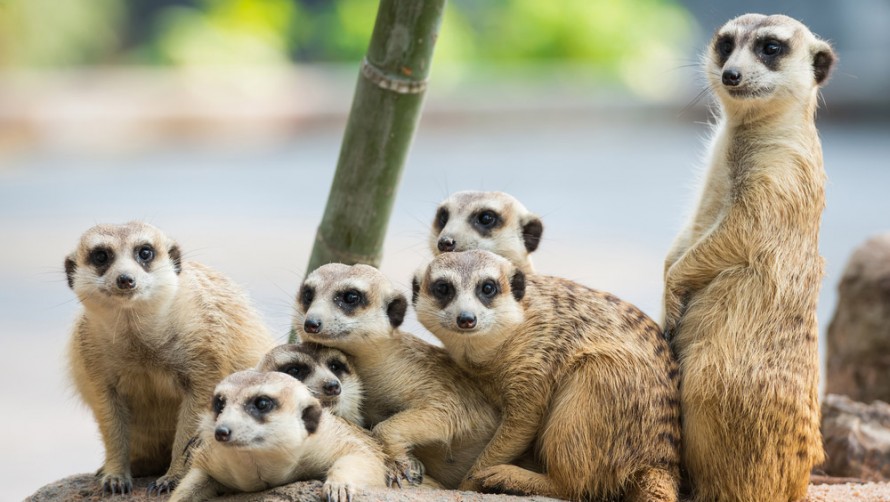 Tim Clutton-Brock’s work on meerkats in the Kalahari Desert led to the launch of the first ever animal docu-soap Meerkat Manor, meerkats have grown in popularity ever since and are now even the furry mascot of insurance comparison site Compare the Market. However, meerkats are not always the cute animals they are made out to be.

In his event The Origins of Society, behavioural biologist Tim Clutton-Brock explored the different breeding and behavioural patterns in animal communes, particularly in red deer, meerkats and Soay sheep.

Most animals either live in monogamous, polygamous or cooperative societies. In polygamous communes, conflict between male species causes other male members to die out. This is due to competition for mates and food sources, as well as competing to be the alpha male. This is a prime example of the survival of the fittest.
The evolution of polygymy also drives competition which causes evolution in males. This is why the male is usually larger or has different markings, an example being the peacock. However, animals that are monogamous largely grow to the same shape, size and colourings.

This is not the case with meerkats who live in cooperative societies, with one dominant male and female and a group of subordinates to help care for the offspring. Cooperative societies are commonplace in the desert, due to the arid surroundings the meerkats work in teams. After the pups are born the mother leaves the group daily for the next three weeks in order to feed herself, to build her energy to be able to suckle the offspring.

During this time the subordinate meerkats babysit the pups, and are prepared to defend them to the death. The most likely form of attack on the meerkats is from other meerkat groups, hence the need for some of the subordinate members to perform sentinel duty and keep a lookout for approaching groups. Rearing the pups is a collaborative effort carried out by the entire group; several of the subordinate females will also help to feed the dominant female’s pups, even if they have never had any pups of their own.

Meerkats are very protective animals and have been known to kill within their own groups. The elder female meerkats sometimes kill their grandchildren in order to protect their gene pool. This is a form of protection because the grandchildren have only ¼ of their genes, and could pose a threat to their own children, who have ½ of their genes.