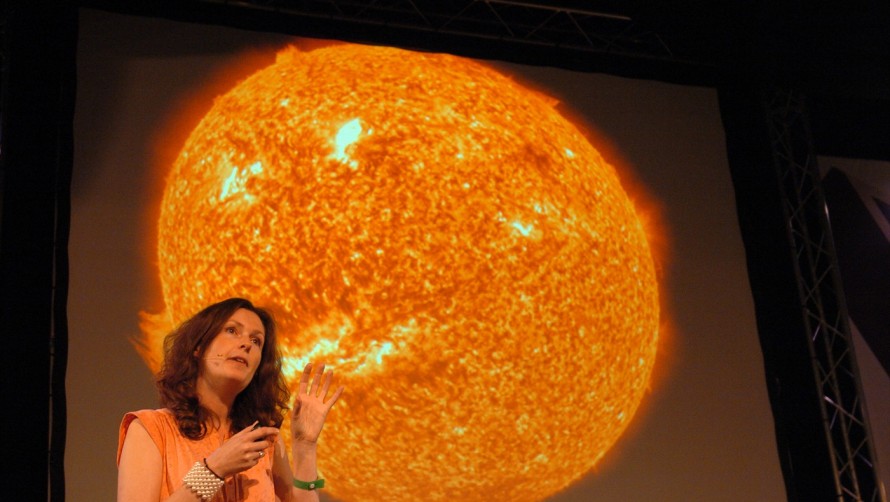 The surface of the Sun is a searing 5,500 degrees Celsius, with an ionised atmosphere that is brimming with magnetic fields. As activity levels rise, this giant ball of gas hurls its matter towards Earth, altering our own magnetic field and atmosphere.

The threat of extreme space weather wreaking havoc on our world all sounded a tad science fiction to me, until Dr Lucie Green explained all at the Cheltenham Science Festival.

As the audience was shown videos of the Sun releasing huge amounts of energy and expelling its atmosphere towards us, it became apparent that solar super storms – discussed a great deal in the media recently in light of a report released by the Royal Academy of Engineering – are a very real threat.

Scientists have monitored the activity of the Sun and can now give us an idea of how a solar storm is formed.

Initially, groups of sunspots appear on the surface, where activity levels are higher than the rest of the star. Bursts of light known as solar flares are then released from within these spots, taking just eight minutes to reach us. These flares change the ionising radiation in the Earth’s atmosphere and are the first component of solar activity driving a super storm.

Secondly, energetic particles are accelerated out as energy is released from the Sun. They reach us in approximately thirty minutes and can continue to shower Earth for days if further energetic eruptions occur…

Emily Burns is a UCL PhD student working in the Structural Biology laboratory at the London Research Institute. When she’s not in the lab, she’s usually getting involved in science outreach programmes, or discussing and writing about all things weird and wonderful. You can follow her on twitter @emilyredhead.