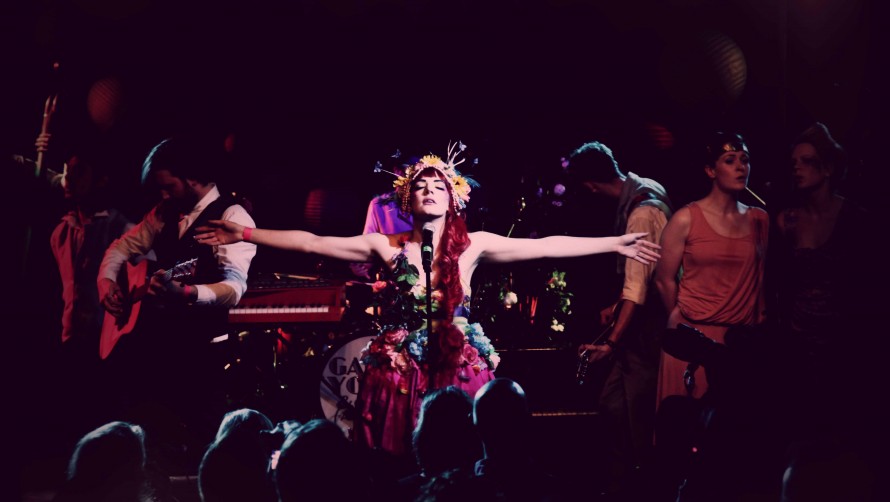 After Trio Damba (and lunch), I went to Gabby Young and Other Animals in the Big Top. The band was large – an 8-piece, and the instruments played (that I could see, there may have been more) were drums, bass, guitar, keyboard, trumpet, violin, trombone, tuba, accordion and melodica!

Young is an arresting performer – her colourful dress, shiny headwear and bright red hair make her hard to miss! The band was extremely energetic; audience participation was again high on the agenda. Many of the band’s tunes seemed to me to fall somewhere between Cabaret, and the Balkan sound of Trio Damba, for example, but the full band numbers were interspersed with quieter, acoustic songs – I particularly enjoyed the 12/8 ballad The Answer’s in The Question and Honey.

At the other end of the band’s spectrum, one song (which, while it was not announced, I am going to call Horatio as that word was used more than most others during it!) made effective use of the audience, utilising them as a texture within the song rather than just call-and-response. Segment built to an anthemic climax and a song dedicated to her father (who was in the audience) was moving.

Her voice is very powerful – so much so that I felt she had a tendency to over-sing a few things that could have been more affecting left understated. She exhibited some nice microphone technique on the aforementioned Honey and used her falsetto range to powerful effect.