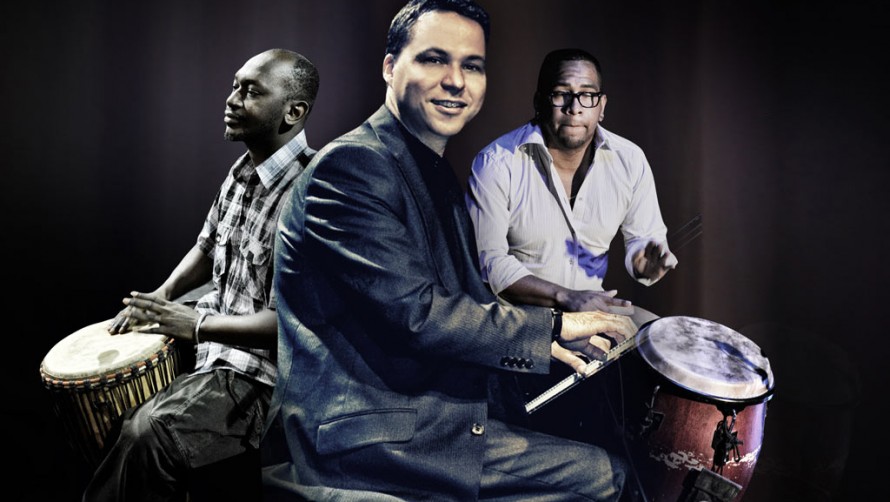 With a slight change to the planned personnel, due to some unfortunate visa regulations, I was unsure how the concert was going to go, but then Tony Dudley-Evans announced that saxophonist Paul Booth would be an addition to Wilson’s Trio just for today, as well as drummer Frank Tontoh. They opened with a trio tune reminiscent of fellow latin-influenced pianist Chick Corea, which was in fact the Sting tune We Work The Black Seam Together. The groove between Sanz and Mantovani was intricate and propelled Wilson’s improvisation, which was a mixture of bebop influenced lines and clusters of chords punctuating the quick latin groove. I thought that starting as a trio was a great way to start the show, as they effortlessly played their way through afro-cuban and latin-american grooves, as well as some pretty quick straight-ahead jazz.

With the addition of Booth and Sanz, the band played through an atmospheric version of Miles Davis’ Solar, which after climaxing with Booth’s impressive solo, ventured into a cool salsa groove, perpetuated by Sanz and Tontoh’s authentic percussion style and underpinned by Mantovani’s strong bass lines. I found myself grooving in my seat the whole time (luckily I sat away from most of the audience).

I was blown away by Sanz’s percussion solo which was a whole improvised composition in itself. I didn’t think some of the stuff he played was humanly possible; his hands becoming nothing but a blur and playing 3 or 4 complex rhythms at the same time to create a sublime latin groove. He even did a bit of call and response with the crowd, stopping to humbly thank us for our participation. The rest of the set featured both straight-ahead or latin (sometimes both) versions of tunes such as What Is This Thing Called Love? where Booth brought back the spirit of ‘Trane and Mantovani’s fluid lines had echoes of Dave Holland, and Fly (Steve Winwood) which was a necessary ballad break to the rhythmic feast provided by Wilson’s band. Percussion break-downs were more than welcome however, as I felt that it was really the rhythmic content which drove the ensemble and gave it its ‘Latino’ feel; session drummer Tontoh handled every groove with ease and metronomic timing throughout, and overall the band was incredibly tight. Unfortunately, Puente and Alvarez only joined the band for the last 15 minutes of the show, for a few vocal led pieces, interspersed with some melodic violin solos. It would have been nice to see some more of these guys, but it did suit the programming of the show well to feature mostly the grooving rhythm section then augment it with vocals and violin, as the music became a little darker and freer towards the end. It was a shame that the short version of Giant Steps in Puente’s feature didn’t come across well due to some lackluster improvisation.

Verdict? Check out Alex Wilson’s Trio on CD and on tour! If you’re a fan of Chick Corea and Michel Camilo, and generally great danceable latin and salsa grooves with a heavy jazz influence then you won’t be disappointed. The playing by all the musicians today was world class and should definitely be experienced at least once.