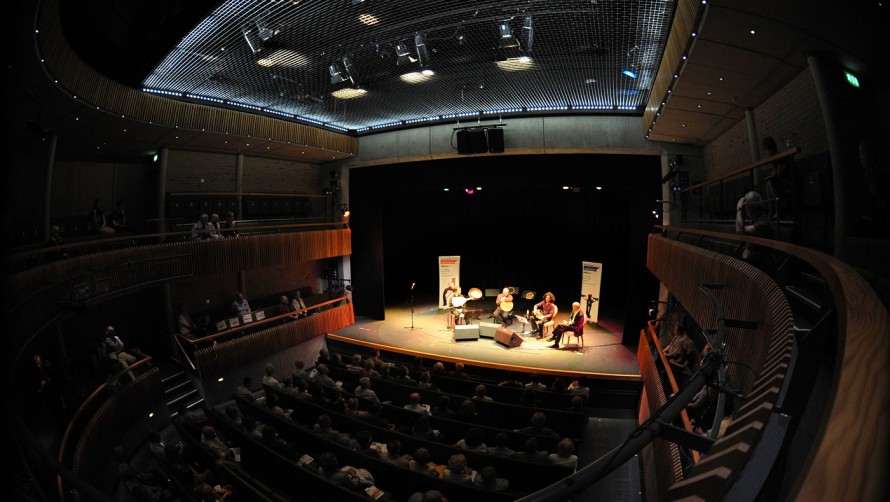 The Trondheim Exchange project is each year one of my favourite things of Cheltenham. Having been involved last year, it’s great how the collaboration between the two schools brings two very different groups of musicians together resulting in some amazing new music, and the whole project is very inspiring and mind opening.

Band 1 opened with a spacey drum feature from Mofjell, culminating in a pulsating afro-cuban groove. Syson’s melodic style floating gently over the top of the solid groove played by Barker. Syson continued with an angular solo, his aggressive style but beautiful tone reminding me of modern trumpet giants such as Ambrose Akinmusire. They segued into the next tune, with Yeo’s brilliant guitar voicings echoing throughout the Parabola. The band decided to play the whole set with no breaks, which was a nice touch, using musical ideas and improvisation to connect each piece. Barker was effortless in his use of the entire range of the bass, and the rhythm section reacted well to Syson’s provocative style, providing a range of textural blankets from which to improvise.

Band 2 stole the show in my opinion. They began with a chordal bass feature from Kalman, who set up a tight groove with Cottrell, who is currently playing amazingly well after only 1 year of study at Birmingham Conservatoire. Havenstrom’s voice was genuinely beautiful and gave me goosebumps. On their opening tune Survival Kit, written in collaboration between her and Kalman, she effortlessly sang a vocal solo which moved forward with the help of Bayliss*’ melodic and beautifully gestural style. They continued with a Bayliss original West Stow, on which the composer really shone, alongside some burning rhythm section playing between Kalman and Cottrell. Finishing with Alex, a composition which *Woodhead dedicated to his dog back home in Sheffield. The haunting melody was sang elegantly by Havenstrom, accompanied by Kalman and Woodhead’s contrapuntal line. Worth noting was Woodhead’s handling of the announcements, which he managed professionally with a touch of humour too.

Band 3 had a distinctly more upbeat vibe about them, groove taking high priority, thanks to the excellent rhythm section foundation provided by Yarborough and Holmqvist. Rigaud’s beautiful tenor sound was at times reminiscent of Mark Turner’s, but also had a provocative element, which was matched by Yarborough’s propulsive and driving drums. After the first tune, the band collectively improvised, feeding off each other’s ideas, into Desert Nomad, an epic Dunnett composition, characterised by its eastern feeling and culminating in a heavy groove lay down by Yarborough and Holmqvist. The band then played Yarborough’s The Phoenix, an intricate yet melodic tune where Dunnett showed his mastery of the trombone, and Holmqvist’s aptly named Cheltenham, which commenced with an extremely melodic bass solo introduction, showing the audience what can be done with electric bass without playing a lot of notes.

My favourite concert so far of Cheltenham. I always love to see the effect that the exchange has on each individual musician, and look forward to 2014’s efforts!