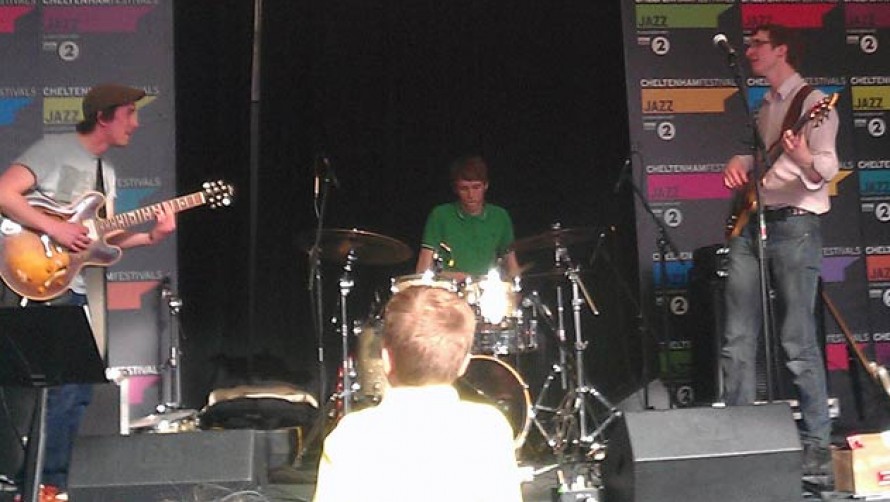 Bristol born bassist Rich O’Brien opened the free stage this evening, with a mighty set of funk grooves and atmospheric sounds. After the briefest of soundchecks, the quartet started with a slow jazz funk tune entitled Ricardinho, O’Brien immediately asserting his prowess over the instrument, both locking in with last minute stand-in Andrews’ sparse but metronomically grooving drums and interspersing it with fragments of Herbert’s jaunty melody. Despite the obvious jazz-funk orientation of the band, they also displayed their influence of the blues, especially Edmunds (another stand-in player for the evening) on guitar; BB King, Wes Montgomery and John Scofield clearly major influences. The sound out front was a little bass heavy at first and needed some more drums to balance out the sound, but this improved as the set progressed.

They followed with Cold Duck Time a Eddie Harris tune, and a favourite of mine. This featured a busier groove from Andrews and O’Brien, and started with a raucus and virtuosic Victor Wooten-esque bass solo from O’Brien, building dynamically and dropping down to a simmering groove. This tune was a clear favourite of the crowd too, some of whom even managed to get up and dance, albeit a little reservedly at first! The energy of the band was great and they were clearly in the groove and inside the music the whole time.

The set continued with Juvenile, O’Brien again handling multiple roles with ease, and the elongated melody from Herbert provided some much-needed contrast to the set. Funkyard Jam harked back to the classic fusion days of the 70s and featured blazing solos from Edmunds and Herbert and yet another simmering groove from the bass and drum duo, and Frisky despite the name was an atmospheric jazz-influenced groove, a guitar feature for Edmunds. Whisky Fever was a pulsating groove which got everyone dancing again and was a great way to end what was a great opening concert for me at Cheltenham.

What I enjoyed the most and what came across clearly within the band themselves was how much they enjoy playing together and how they communicate musically and at the same time expressively on their respective instruments. Andrews’ drum grooves and time-feel could not be faltered, and it was great to see O’Brien fronting a bass-led ensemble (though I may be a bit somewhat biased on that one!). Herbert handled his melodic role extremely well whilst also augmenting the overall sound of the band greatly with his smooth and, where necessary, more aggressive sound. Edmunds provided the blues in the band, mastering the blues guitar sound, and served the rest of the band well during their improvisation, as well as stealing the limelight himself occasionally. Considering two of the band were standing in for O’Briens usual band-members, they locked in together extremely well, providing danceable grooves and the blues and jazz influence kept everyone happy.

Now, I need to go and practise…