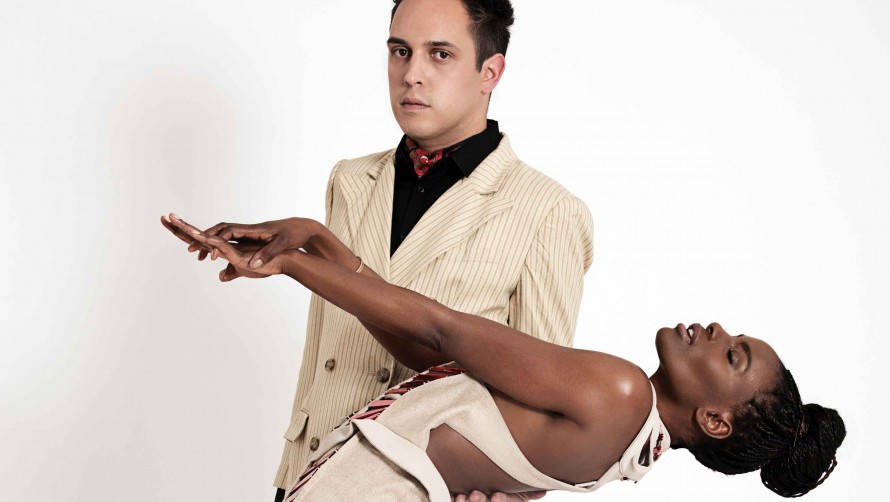 Front-woman and BRIT School graduate Shingai Shoniwa really knows how to make an entrance. Amidst atmospheric sounds and robot-like choreography she paced slowly onto the stage, dressed all in gold, and was handed a blindingly sparkly silver bass. Originally billed as stripped back duo performance, this was anything but. Noisettes in last night’s incarnation were a full live band, featuring excellent musicianship, faultless vocal harmonies and an energetic stage show.

Commencing with the favourite Wild Young Hearts, the band rocked out with an explosive and animated performance. A few of the crowd stood up to dance for Don’t Upset The Rhythm but the majority danced in their seats as the impressive light show illuminated the Big Top. Musically, the bass and drum grooves were tight, featuring both rocky electric bass lines and funkier and pulsating synth grooves. The music was greatly enhanced by the addition of 3 and 4 part vocal harmonies, and the wild guitar riffs of guitarist Daniel Smith. Crowd involvement was also great, Shoniwa exchanging tribal call and responses with the audience, and thanking them for their “awesome presence”. Shoniwa herself is a real enigmatic personality, with a great and very individual vocal sound, the influence of Billie Holiday’s style coming through in her tone. I would have liked to have seen her play more bass, but this would have impeded her improvised acrobat-like dance moves and supermodel-like grace.

Sometimes brought a change in mood to a largely pop, punk and rock influenced set, Smith switching to acoustic guitar and the contrapuntal vocal harmonies were great. Since they were headlining Saturday night at Cheltenham Jazz Festival, they brought a little jazz to the set with Pure Imagination, sung in a rubato style with solo piano as an introduction. This was a nice break to the rock-heavy set and dynamic stage presence of the band, at one point Smith playing guitar with his teeth a la Jimi Hendrix.

Some of the songs from the latest album Contact (such as That Girl and I Want You Back) did not go down so well as the more popular #1 hits, and at times could sound a little twee and too different to the rest of the set to blend in well in terms of the programming. However, with her impressive vocal range and incendiary stage presence, Shoniwa and Noisettes were the most spirited and vibrant live band I have seen in a long time, the unscripted choreography and interaction giving a great element of raw originality to the show.