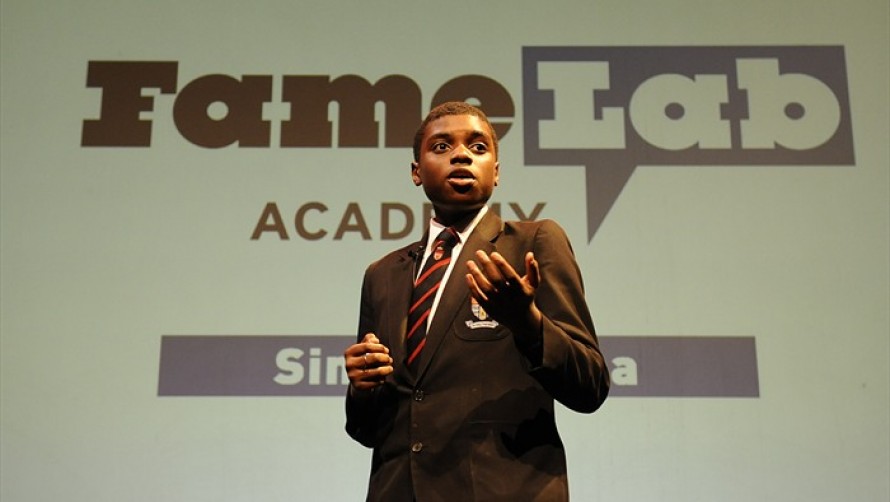 On April 23, Simi Adeshina from Woolwich Polytechnic School won the first ever FameLab Academy. Aimed at pupils from 14 to 16 years of age, FameLab Academy was piloted in the Olympic legacy boroughs of Hackney, Tower Hamlets, Greenwich and Barking among others. Following FameLab’s unique formula, the Year 10 students had three minutes to present a STEM topic of their choice to a panel of judges. Using only the props they could carry on stage, each student was judged on the three C’s of FameLab: content, clarity and charisma. The competition was compered by Quentin Cooper and judged by space scientist Maggie Aderin-Pocock MBE, writer and performer Timandra Harkness and former FameLab’er Alistair Linsell.

Judges and members of the audience at the Bloomsbury Theatre were blown away by the standard of all competitors. Lead Judge and established FameLab trainer Timandra Harkness said: “We had been told to expect a very high-standard based on students’ performance at their school finals, but we were truly impressed but what we saw and had an incredibly difficult job to choose between them.”

In the end Simi Adeshina’s entertaining, intriguing and factually correct talk on why we yawn certainly kept everyone awake and listening to his every word! There were two runners up: Zainab Hussain from Plashet School, discussed matter, energy and the Higgs field while Abdul Raoef from Bow School explained how touch worked, what this had to do with atoms and how we are all seemingly magicians. Prizes ranged from an iPad 4 and family tickets to attend Cheltenham Science Festival to a class trip to a nuclear power plant and tickets to the EDF Energy London Eye.

British neuroscientist Professor Russell Foster FRS commented: “In my view it has never been more important to invest in science and – critically – communicate scientific progress to the broader non-scientific community.

“Competitions like FameLab introduce us to the next generation of scientists who are not only addressing great scientific challenges, but are able to communicate what they do.”

FameLab Academy was made possible by a generous grant from EDF Energy and it is hoped that the success of the pilot programme will enable to competition to develop further in 2014.