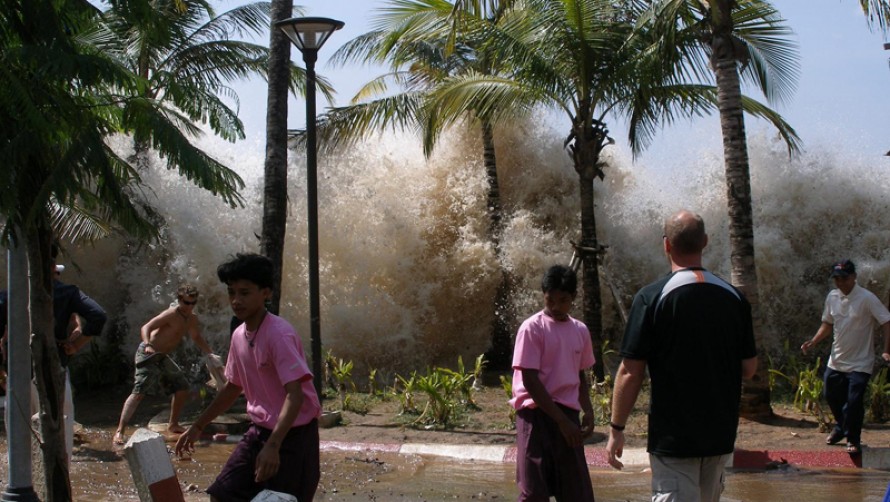 Tsunamis are one of the most dangerous of natural hazards. They rarely occur but when they do they can be catastrophic, as with the recent events in the Indian Ocean in 2004 and Japan in 2011, when almost 250,000 people died. But how do scientists study these devastating waves? And more importantly what would you do if you were face to face with a giant wall of water?

Fortunately, over the past 20 years our understanding of tsunamis has greatly improved because there have been so many catastrophic events. From these recent tsunamis, we now know that a great earthquake and tsunami may take place at many more places than we previously thought, specifically along the borders of continents where there are convergent margins. More sophisticated digital technologies allow us to record earthquakes, so we better understand not only how they form, but how the ground moves when the earthquake strikes. In addition we can record these features very quickly, analyse them and when earthquakes strike have a good idea when there is a danger from a tsunami and effectively warn people so they can evacuate to safety.

Another advance has been to better understand where tsunamis occur, their size and how often they strike. On land, we do this by using the sediment that tsunamis lay down when they flood the coast. This information can help us identify areas at risk. At sea we can use new methods of mapping the seabed that were not available 20 years ago.

So, we still cannot predict when tsunamis will occur, or their size, but we do have a better understanding of their possible general location. Also the massive loss of lives has led to the establishment of tsunami warning systems in all the oceans of the world. We know too, that if we plan for a large event, we can’t get it wrong. There are still problems in warning when the tsunami is generated from an earthquake, landslide or volcano close to the coast, but on coasts farther away, there is now adequate time to warn people of the impending danger and save many lives.

When a warning is issued it is a prerequisite that training has been given to threatened communities on what to do. Where there is high ground nearby, signs indicate evacuation routeways. If the land is very low, such as on a coastal plain, some buildings may be specially identified as safe havens. The main thing is for people to get to safety as soon as possible. If people know the warning signs of an approaching tsunami and know what to do to escape, then hopefully coming face to face with wall of water will not happen; you will be watching (with others) in awe of an amazing natural disaster, but from a safe distance and high above any dangerous wave. Many have seen the film, ‘The Impossible’ and this is as real as it gets, and we need to avoid this happening again.

David Tappin is part of the family event Tsunami Survival on Sunday 9 June.