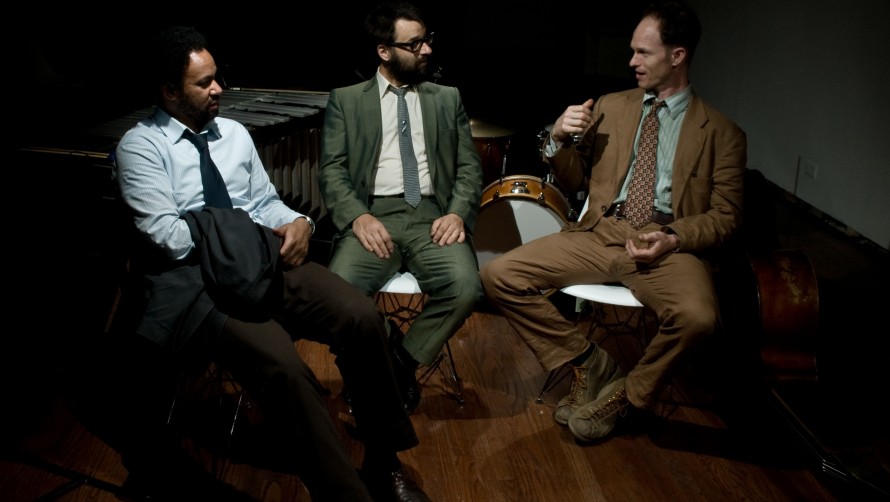 Sunday night saw me at the Parabola Arts Centre for vibraphonist Jason Adasiewicz and his trio Sun Rooms, with Devon Hoff (bass) and Mike Reed (drums).

The venue proved itself to be my favourite – nice acoustics and an intimate atmosphere. The band played Adasiewicz’s own compositions, utilising loose, open forms and short melodic statements. The titles of his tunes were similarly brief, good examples being Bees and Steak (or Stake – not sure which!).

Adasiewicz is very watchable – sweat dripping off his nose onto the instrument, he shouted, danced (almost tripping over his monitor at one point), and often unleashed a two-handed attack on his instrument from behind his head. Many of his compositions utilised medium swing tempos, but contained a lot of colour and texture – the drummer was using what looked to me to be a knitting needle at various points throughout the set!

The highlight in my opinion was Rose Garden – a simple tune that the band deconstructed and reassembled with intelligence and grace. For me, the only things that detracted from the performance were the facial expressions and excessive movement of the bassist – I applaud musicians showing involvement with what they are doing, but I found myself wondering how much of it was affectation. That’s a minor point; overall I enjoyed the show!