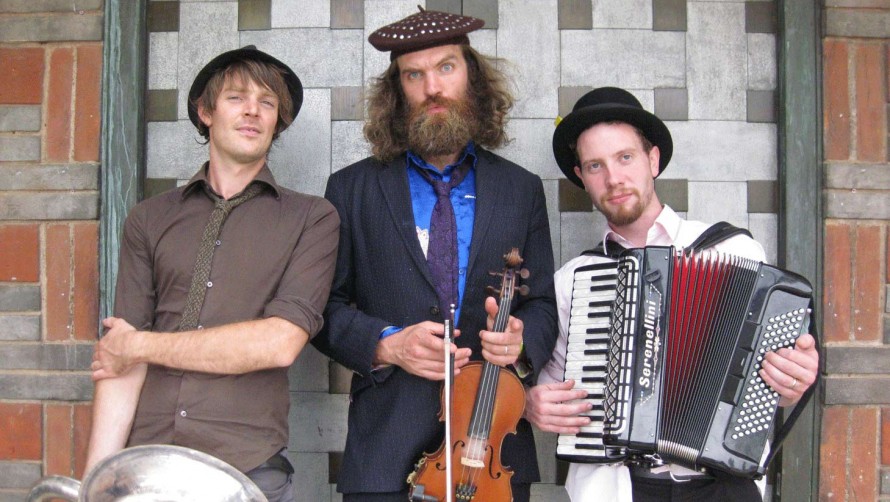 On Monday morning (after a very late night due to my participation in the Hotel du Vin jam session), I went to Trio Damba’s Family Show in the Jazz Arena. Again, it was not something that I would normally have attended but was thoroughly enjoyable.

The first thing to point out is perhaps that there were, in fact, four of them; the instrumentation of stripped-down drumkit (the drummer also sang; regular readers will know that I am a fan of that kind of thing) tuba, fiddle and accordion was augmented with ukelele (played by the fiddler), members of the audience (mainly those under the age of 10) playing miscellaneous percussion instruments, and cardboard tubes of varying sizes that were hit with table tennis bats!

I understood that the quartet comprised members of festival favourites the Destroyers, and the opener, Hot Set was aptly titled – it was a fast, energetic medley of three Balkan tunes. The audience had almost as much asked of them as the onstage performers – copying actions, learning a Spanish song, singing in the round, providing sounds of the jungle to accompany the ‘boring’ slow opening of a tune, conga-style dancing, and first being asked to declare themselves to be ‘alive, alert, awake, enthusiastic’ to the tune of If You’re Happy and You Know It. For the finale, the band mobilised themselves and entered the audience – my note-taking prevented me from dancing (that’s my excuse, anyway) but the aisles around me were filled with people who could not resist leaving their seats.

The players onstage were obviously very accomplished (the melodeon player even played drums at the end!) and comfortable with this kind of situation – having been involved in a few myself I know it requires different things from a musician than a ‘normal’ show. I’m glad I went; it was fun, well-pitched and inclusive.