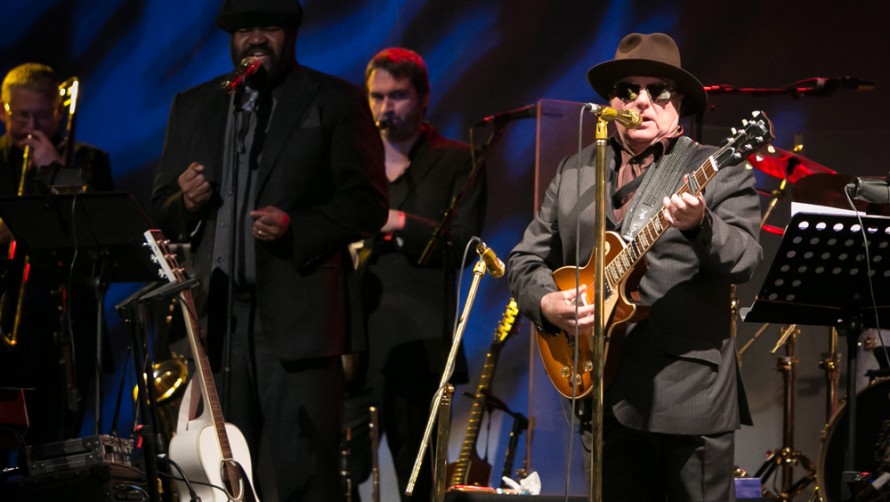 My Cheltenham Jazz Festival experience concluded with Van Morrison in the Big Top on Monday night.

His music was played a lot by my parents while I was growing up (my dad was particularly excited to hear I was going to the show). While not primarily a Jazz artist, he has covered many blues tunes throughout his career; St. James’ Infirmary and Baby Please Don’t Go (on which he played harmonica) featured this evening. There were many covers in his set – I was pleased to hear his treatment of one of my favourite ballads, Anthony Newley’s Who Can I Turn To. He also (of course!) played some of his greatest hits including Brown Eyed Girl, Moondance, and Gloria as an encore.

His set and band both sounded well-rehearsed, but during a lengthy section of the show which he dubbed the ‘workshop’ he set up a vamp, broke things down to drums, bass and keyboard and gave spur of the moment instructions to the horns and guitar as to what he wanted them to play.

The highlight of the set for me was another of his songs, Tupelo Honey, done in duet with Gregory Porter. The two men seemed to have genuine affection for each other and as they had only rehearsed that afternoon (as I understand it), the spontaneity of the performance lent it added excitement.

The venue was predictably full to capacity, and he and the band received a standing ovation. It was a great end to the festival and I hope to be back next year! Similar weather conditions, please.