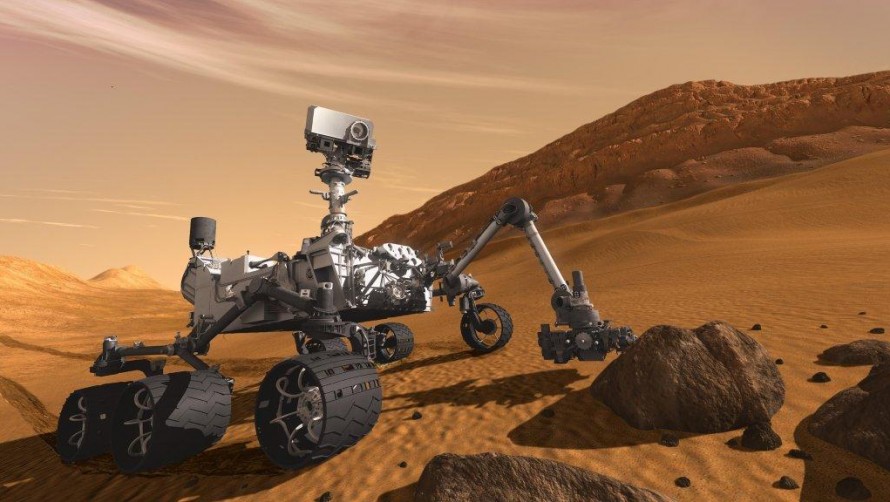 NASA’s latest venture to the red planet, the Mars Science Laboratory (MSL), is of course far better known by its more evocative moniker, Curiosity. And there has certainly been a flurry of excitement surrounding this six-wheel-drive, nuclear-powered, laser-wielding, SUV-sized giant of an investigative robot.

From the nail-biting ‘seven minutes of terror’ during its fully-automated, audacious descent and landing beneath the unique sky crane, to the endearing self-portrait snapped from its outstretched robotic arm, Curiosity has captured all of our imaginations. And the ground-breaking scientific discoveries are rolling in as well. In March, the MSL team announced to the world the evidence for ancient martian water once spilling across Gale crater; water that could have been “drinkable”.

But I think the important thing to remember is that, as with most space probes, the Curiosity mission is about the slow burn. Systematic scientific investigation, especially when via the proxy of a mechanical robot, is a tortuously slow and steady process. And it will take months for Curiosity to trundle to its principle target, the foot of the towering Mount Sharp, even though it is by far the speediest rover we’ve ever sent to Mars.

The one discovery during this mission that I am really rooting for though and, as far as I’m concerned is Curiosity’s raison d’être on Mars, will hopefully be the identification of organic molecules – the chemical building blocks of all life as we know it. Curiosity isn’t the first of our robotic explorers to be equipped for sniffing out organics, but it is by far the most capable, and has touched down in an exquisitely promising site that we now know once had flowing rivers.

Organic chemistry is a critical prerequisite for Mars ever having any hope of developing its own native organisms, and so will be a paramount breakthrough in my field of science: astrobiology and the search for life beyond the Earth.

But the key point here is that even detecting organics on Mars doesn’t necessarily mean martians. The presence of these sorts of molecules is an essential requirement for allowing life to develop, but you can still get them in the total absence of biology. We know that many kinds of organics are synthesized by ‘astrochemistry’ in deep space – amino acids, sugars, fatty compounds for making cell membranes, and even nucleobases, the building blocks of DNA. And as our solar system formed these became incorporated into comets and asteroids, with many raining down onto both Earth and Mars throughout the history of the planets.

Discovering organic chemistry on Mars will only be the first step. The second, and trickier, stage will be in demonstrating if those organics molecules have come from martian biochemistry, or simply delivered from the dark depths of outer space. Mars Science Laboratory promises great revelations, but the march of curiosity has a long and fascinating way to go yet, and our own European rover, ExoMars, will take up the baton when it launches in 2018.

Dr. Lewis Dartnell is a UK Space Agency research fellow at the University of Leicester, working on life-detection instrumentation for the ExoMars rover. He is also the author of Life in the Universe: A Beginner’s Guide as well as the illustrated children’s book My Tourists Guide to the Solar System.