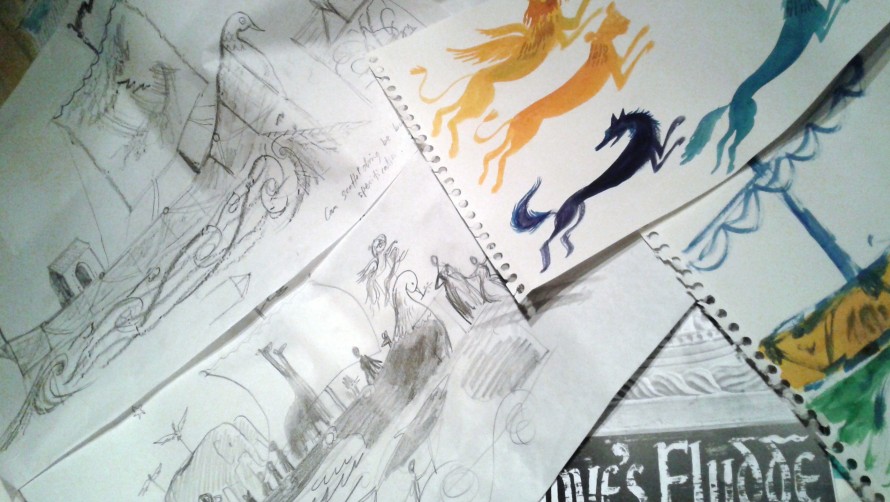 Music has always brought such joy into my world. Music has always told me stories and conjured pictures, even as a child. As an adult I’ve loved creating and performing in illustrated children’s concerts in Cheltenham: An Ella Bella ballet concert in 2011, and Scheherazade with the Orchestra of the Music Makers in 2012.

So I’m especially happy to have been invited back this year as Guest Director of the Cheltenham Music Festival’s family events. What an honour!

To celebrate the centenary of Benjamin Britten’s birth, the festival will be presenting Noye’s Fludde, his operatic setting of the Chester Mystery Play about Noah. It will take place in Tewkesbury Abbey, a magnificent setting, one which is itself no stranger to floodwaters. Indeed Tewkesbury became famous in 2007 when terrible floods swept over the town, while the Abbey, standing aloft like a great ark, was spared. Noye’s Fludde is a wonderful piece and so you can imagine how delighted I was when Festival Director Meurig Bowen asked me to design the opera!

The work is written specifically for performances in churches and is a children’s opera, in the sense that the orchestra and chorus and most principles are cast from school children. The orchestration includes tuned teacups, and the story features a tipsy Mrs Noah who refuses, at first, to board the ark. It also demands audience participation with hymns written into the fabric of the score.

I hope to come up with something striking and appropriate. The ship-like abbey is my first “port of call”. Medieval ships had castellated sterns, and so I am considering creating a stern based on the Abbey itself. For the animals, the ceiling mottes and decorations are a fabulous source of inspiration… I am now looking through books on heraldry, medieval bestiaries and the like. How it will be physically staged is a big challenge, and the designs will need to change and evolve to accommodate the needs of everyone. But I relish the idea of a collaborative project like this; it is excitingly distant from the isolated existence of a writer and illustrator.

By coincidence, my Grandfather lived next door to Britten and my Grandmother knew “Benjy” from her Sunday school. He even wrote music for a play she performed in; she used to say she was Britten’s “first leading lady”. I myself went to the Benjamin Britten High School in Lowestoft. So this is an especially exciting opportunity, with many personal resonances, many memories. And a heck of a lot of work!

See Noye’s Fludde performed in Tewkesbury Abbey on the 3rd and 4th July.