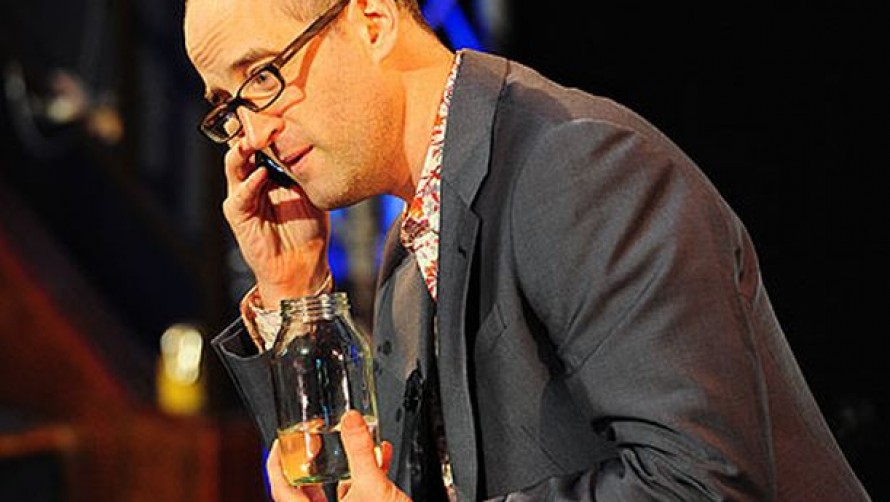 Science Festival favourite Mark Miodownik, star of BBC 2’s Genius of Invention reveals the secrets of underwater fire, writing an introduction for the world and the new Institute of Making.

You’ve been pretty busy since we last caught up with you! Your new series Genius of Invention aired on BBC 2 in January. What can we look forward to in the upcoming episodes?

Lots of invention! We’ve already looked at Power and Speed, this week we’re looking at Communication. We’re dealing with big, important themes in engineering. The show rollercoasters through it all, it’s good fun and kind of aimed at a family audience.

Through appearing on Genius of Invention and Dara O’Briain’s Science Club, you’re gaining quite a reputation for being ‘The Experiment Guy’.

Yes, they’re great fun. Demos are a cross between performance and explanation and they don’t demand too much of an audience. Demos are a scientist’s version of a dance routine; you need to be able to do it in order to entertain. You can’t inform if you can’t entertain.

What have been some of your favourite demos over the series?

I like the experiments that come across as the most extraordinary. My favourite one actually hasn’t been included in the series, which is a shame. It was looking at nitrocellulose, which is a highly flammable and unstable material; it actually killed a large number of people when it was first used in celluloid film in cinemas. Frighteningly, it burns under water, so we set fire to a roll of it, plunged it into water and filmed it in slow motion. Wouldn’t you want to see that?

You’re Director of The Institute of Making, which officially launches in March. Why was the Institute set up and what does it aim to achieve?

A lot of people make things in all sorts of different places with all sorts of different materials. But if you’re not careful, you can end up believing that there is only one way to make something. The Institute was set up because we thought, ‘What if there was a place that had everything for creating and making? Resources, ideas, a place to look at materials.’ It questions the methods you’d usually use for making something, whether it’s a chemical molecule or a bed or a cup of tea. It’s like a cross between a sweetshop and a workshop – somewhere creators can come and play.

You also have a book coming out in June this year. Can you give us an outline?

It’s called Stuff Matters and it’s about materials, which is my research area. It’s a funny subject because everything is made of something. It’s a huge topic, too big for a book really! I’ve just tried to write an introduction for the world – an appetiser, to make you want more. Every chapter is on a new material and written in a different way, though I don’t want readers thinking that these are the 10 most important materials. They’re not, it’s just a snapshot of how wonderfully complex our material world is; from the exotic to the mundane.

You’re a Cheltenham Festival regular – what has been your favourite moment or event at the Science Festival?

There are a lot of favourite moments. We’ve done a series of events at the Science Festival on edible materials – in 2010 myself, Andrea Sella and Clive Page gave a talk on the science of chocolate while the audience was tasting it. That was great, you can’t go wrong with chocolate. We’re doing a similar one on tea this year – it will be one to watch.