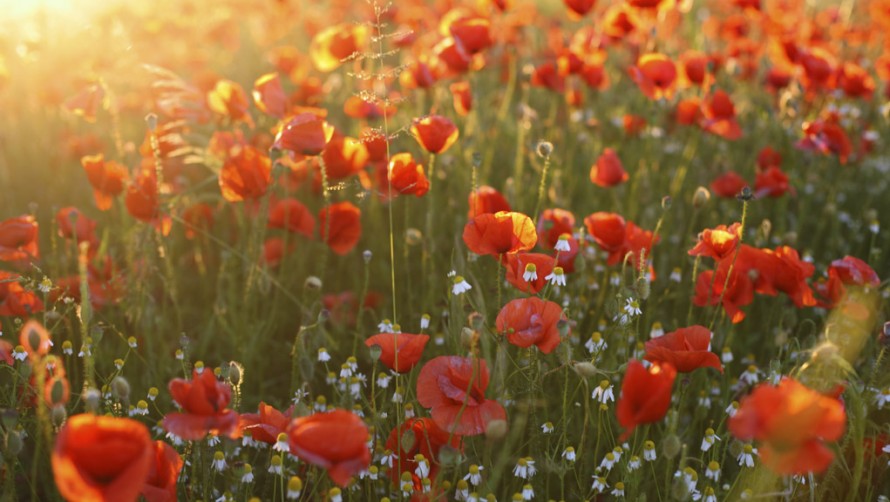 A unique band of solider poets have left an indelible mark on history. Here we celebrates the war poets and their special place in the British literary tradition.

The First World War has been immortalised through words and music, with an astounding amount of this work coming from soldiers with personal experience of battle horrors. Much has also been written since and continues to be voraciously consumed. Michael Morpurgoís War Horse, for example,topped the ‘best-seller’ list first as a book, then as a critically-acclaimed play, and then as a blockbuster film directed by Steven Spielberg. From a literary point of view, the genre that most defines the years 1914 to 1918 is its poetry. Much-quoted lines from the ‘War Poems’ are lodged in the popular consciousness and, nearly a century later, its poetry is still firmly located on the school GCSE syllabus and it shapes our modern understanding of the conflict.

The incredibly handsome, Cambridge and public school educated, Rupert Brooke was and remains the poster boy for a golden age of pre-war poetry. He lived an enchanted life, mingling with the Bloomsbury Group and travelling the world. It was Brooke who penned the now infamous lines: ‘If I should die, think only this of me; / That thereís some corner of a foreign field/ That is for ever England’. Brooke fulfilled this prophesised fate, eventually being buried in an olive grove in Skyos, Greece, though unlike many of the other ‘War Poets’ it was not battle injuries that killed him. Brooke reportedly passed peacefully after a short illness with blood poisoning caused by an infected mosquito bite. He never knew the true horrors of war and his halcyon vision of battle was soon to be obliterated by his successors.

Wilfred Owen’s derisive poetry offers stark contrast to Brooke ís idealised work, destroying any romanticism about a soldier’s experience on active duty. He wrote: “Bent double, like old beggars under sacks… coughing like hags’, Owen’s soldiers ‘trudge’ to an ignoble death drowned by gas, gurgling blood and finally abandoned. Owen implores people not to perpetuate ‘the old Lie; Dulce et Decorum est/ Pro patria mori’ (‘it is sweet and right to die for one’s country’) that was prevalent in the aggressively patriotic pre-War era. Owen’s ‘Anthem, for Doomed Youth’ similarly captures this anti-establishment feeling, which is immediately obvious in the poem’s paradoxical title. He questions what bell will ring to mark the deaths of soldiers ‘who die as cattle’, and says that the only ‘mourning choirs’ to commemorate their sacrifice will be the ‘shrill, demented choirs of wailing shells’. Owen had a strong sense of bitter irony, making his death (just one week before the signing of the Armistice) and his subsequent promotion (the day after he died) all the more poignant. His mother received the telegram informing her of his death on Armistice Day, when the rest of the country was celebrating.

From a literary point of view, the genre that most defines the years 1914 to 1918 is its poetry. Much-quoted lines from the ‘War Poems’ are lodged in the popular consciousness.

Owen would not have become the poet he did were it not for Siegfried Sassoon, who was already writing war protest poetry when Owen’s work was just in its infancy. A shooting, hunting, country gent, Sassoon became infamous when he had a letter published in The Times, criticising the government by suggesting they were deliberately prolonging the war. Only a campaign by friend and fellow war poet Robert Graves to convince the authorities that Sassooon was suffering from shell-shock prevented him from being court-martialled. Sassoon wanted to prick the public conscience about the war. In ‘Suicide in the Trenches’ he writes of how the trench-life changed ‘a simple soldier boy / Who grinned at life in empty joy’ to a lice-infested wretch ‘cowed and glum’ who ‘put a bullet through his brain’, something considered so shameful that no one would speak of him again. Sassoon calls the public ‘smug-faced’ as they cheered marching soldiers, safe in the knowledge that they wouldn’t suffer the same ‘hell’ that the soldiers would.

Sassoon’s court-martial saviour Robert Graves also survived the war though not without serious injury. Graves even had to endure reading his own obituary that had mistakenly made its way into The Times. After the war, Graves suffered badly with shell-shock but he went on to be a leading literary figure and Professor of Poetry at Oxford. Like Owen and Sassoon, Graves dispelled ideas of glorious heroism with his war poetry. In ‘A Dead Boche’ he tells of ‘A certain cure for lust of blood… a dead Boche… who scowled and stunk… face a sodden green… Dribbling black blood from nose and beard’. Graves was an incredibly prolific writer and, by the time of his death in 1985, his war poems were just a fraction of his whole collection with I, Claudius probably being his best-known work. Itís amazing to think that while Owen looked to Graves’s work for inspiration, so too did Ted Hughes 40-odd years later. Ivor Gurney is another ‘War Poet’ who continued to produce work after the war. Gurney was Gloucester born and bred and an exceptionally talented musician. He was a chorister at Gloucester Cathedral before winning a scholarship to the Royal College of Music. His studies were interrupted by the war, but while serving he began to write poetry in earnest. In ‘Pain’, he wrote about ‘Dying in shell-holes both, slain by the mud. / Men broken, shrieking even to hear a gun’, but he also wrote with fondness about the glory of his fallen comrades, and also of the beauty of England, particularly when compared to the horrors of war-torn France. Gurney continued to be a successful composer, though like many other ex-soldiers he seriously struggled with mental ill-health in later life. Gurney was eventually confined to an asylum where he spent the last fifteen years of his life. His moving story has inspired a new play, A Soldier And A Maker, using Gurneyís own music, poems and letters.