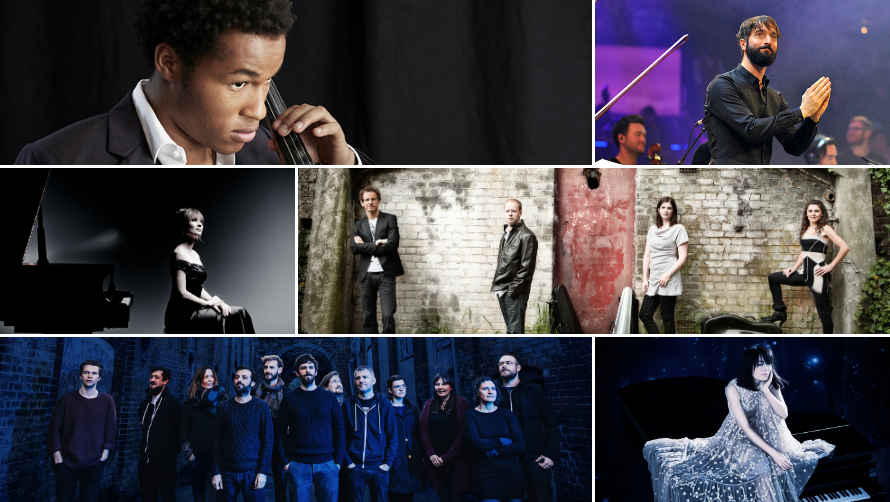 Cheltenham Music Festival announces 10 days of creative programming for its 76th Festival in July, as innovator and composer Jules Buckley joins as Guest Curator. 40 events will take place across 12 venues in and around The Festival Town of Cheltenham. One of the most in-demand conductors and arrangers of contemporary orchestral projects, Buckley has curated several BBC Late Night Proms and is Creative Artist in Association with the BBC Symphony Orchestra. He has worked alongside Head of Programming, Camilla King, on a Cheltenham Music Festival designed to bring classical music to the widest possible audience.

Accessibility is at the heart of the Festival, with its Free Stage in Imperial Square at the heart of Cheltenham returning for the Opening Weekend in partnership with Classic FM. New audiences are invited to ‘pay-what-you-can’ for Classical Mixtape at Tewkesbury Abbey, while tickets under £15 are available for the majority of events.

Highlights include:
• Jules Buckley conducts The Heritage Orchestra in The Music of Moroder. This will be the first European performance of the show created especially for Vivid Festival at Sydney Opera House celebrating the 80th birthday of ‘Father of Disco’ Giorgio Moroder [4 July] 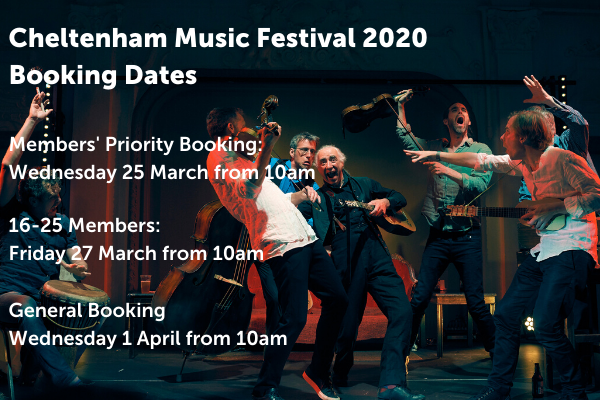 Bringing the best
Jules Buckley – the Festival’s new Guest Curator – puts disco and electronic music in the spotlight with The Heritage Orchestra and producer/co-founder Chris Wheeler [4 July]. Celebrating the 80th birthday of Giorgio Moroder, often referred to as the “Father of Disco”, the Orchestra and guest vocalists will take the audience through Moroder’s instrumental and soundtrack works in addition to his classic disco hits.

Celebrating the 250th anniversary of Beethoven, the great tenor, Ian Bostridge, and pianist Imogen Cooper, who celebrates her 60th birthday this year, perform an intimate recital pairing some of Beethoven’s early songs with his only song cycle An die ferne Geliebte in addition to works by Schumann [4 July]. Clarinettist Julian Bliss and his Bliss Wind Ensemble give a fresh perspective on Beethoven’s music for wind instruments with their programme of Beethoven’s Octet for Winds and Symphony No. 8 [5 July]. Cellist Matthew Barley takes to the stage with a unique take on Beethoven’s cello sonatas, combining performance with discussion, storytelling and improvisation [6 July].

Championing New Music
This year the Festival is proud to launch two new initiatives – RePlay and Retreat – to support the creation of new works and provide a platform for audiences to hear new works again.

RePlay aims to support new works beyond their premieres by programming repeat performances of recent compositions and this year’s Festival has programmed 11 pieces of music in this strand: Freya Waley-Cohen’s Dust, Joanna Marsh’s In Winter’s House, Joey Roukens’s Visions at Sea and works by up-and-coming composers Tom Lane and Nicholas Robert Thayer are performed as part of the New English Ballet Theatre’s Love Games. A highlight of the Festival’s Prelude Weekend at Syde Manor, is a performance of Bagatelles after Beethoven with music by six contemporary composers: Martin Butler, Michael Zev Gordon, Cheryl Frances Hoad, Gabriel Jackson, David Knotts and Jack Sheen [28 June]. The Festival’s new Retreat scheme offers a peaceful location in the Cotswolds for two sets of artists to stay with the purpose of creative development with support to help develop new projects.

Fourteen world premieres are at the centre of the Festival this year. Audiences will have the opportunity to experience Playing for Time, an immersive new work by pianist Sarah Nicolls and cellist Maja Bugge which focusses on the urgency of climate change, bringing scientific data, spoken word – including audio of activist Greta Thunberg – and audience participation together with music to inspire change [4 July]. Sarah and Maja will be the first recipients of the Festival’s Retreat bursary.

Organist Anna Lapwood brings old and new together in a candlelit recital in Cheltenham College Chapel, featuring a performance of Patrick Gowers’ Tocatta – premiered at the Festival five decades ago – and the world premieres of new works by Daniel Fardon, an alumnus of the Festival’s Composer Academy, and Freya Waley-Cohen [10 July]. Other premieres include two new works by Lillie Harris featured in Classical Mixtape [8 July], Improvisations by Matthew Barley [6 July] and a new work by the Propellor Ensemble [12 July] alongside eight new works from the Cheltenham Festival Composer Academy composers, performed by members of Chineke! [13 July].

The Cheltenham Composer Academy, a key part of the Festival’s Spotlight talent development programme, returns for the eighth year. The Academy will be directed by composer Daniel Kidane and sees eight early-career composers (aged 18+) have their compositions work-shopped, performed and recorded by members of Chineke! in addition to having access to industry professionals and mentors [13 July]. As part of the Academy, the Festival presents Composium, a day-long event celebrating the Festival’s foundation as a place for composers and new music. The day, led by broadcaster and performer Kate Romano, will include world premiere performances of the eight brand-new works by the participants from the Composer Academy [13 July].

Young Artists
Cheltenham Music Festival continues to showcase the talents of both well-established young artists and rising stars, providing a platform for the next generation of world-class musicians. Alongside recitals, the Festival will once again host its Free Stage in the Imperial Gardens, featuring the best of UK folk, world, indie, jazz, country, gospel and classical music.

BBC Young Musician finalists, both past and present, feature prominently throughout the Festival, with performances by past finalists Ben Goldscheider [7 July], Sheku Kanneh-Mason [9 July] and Alexander Pullen [9 July] all performing recitals in addition to one of the finalists from BBC Young Musician 2020 who will have competed just two months before [8 July]. Darcy Beck, 2020 winner of Gloucestershire Young Musician, performs a recital with the 2018 Keith Nutland Award finalist April Perrott [11 July].

Sestina, an early music ensemble comprised of young musicians from Northern Ireland performing alongside established performers, join forces with violinist Rachel Podger to celebrate the impact of the Bach family, which spanned over 300 years and seven generations of prominent musicians through a semi-staged performance directed by Thomas Guthrie [7 July].

Making a Difference Through Year-Round Education & Outreach
The Festival’s commitment to ensuring access to the best music and artists has resulted in engaging the local community year-round, inclusive of diverse socio-economic areas of the town. Year-round the Festival provides outreach programmes including workshops and concerts for schools, a community gamelan project and Musicate, a primary school music teaching and appreciation programme which partners 12 local primary school teachers with six young musicians from Birmingham Conservatoire.

This year, the writer and librettist Miranda Walker once again works with pupils from the local St. Thomas Moore Primary School to create Loom, a work with the cross-genre Propellor Ensemble which carries the identity of wherever it is performed. The pupils will work with Walker to create shared stories inspired by local folk tales and legends, which the ensemble will combine with field recordings, improvisation and experimental electronica, baroque and contemporary classical music [12 July].

Unique Musical Experiences
Classical Mixtape returns this season in the medieval surroundings of Tewkesbury Abbey, encouraging audiences to enjoy sets by artists including Isata and Braimah Kanneh-Mason, Ben Goldscheider and the Chapel Choir of Merton College Oxford in an informal setting for a ‘pay-what-you-can’ fee (minimum £3) [8 July].

The Festival returns to the elegant drawing rooms in and around Imperial Square for ‘Beethoven Up-Close’, giving the audience an opportunity to experience Beethoven’s music in an afternoon of intimate chamber recitals in the domestic settings for which they were originally written [12 July].

Alasdair Malloy presents this year’s Family Concert ‘Summon the Superheroes’ with the Royal Liverpool Philharmonic Orchestra and conductor Rebecca Tong. Families can enjoy music from films such as Batman, Spiderman, The Incredibles, Moana and many more [11 July].

Bringing the Festival to a close is Norwegian violinist Bjarte Elke and his ensemble Barokksolistene with a double-bill of ‘Purcell’s Playground’ and ‘Alehouse Sessions’ performed in the round at Cheltenham Town Hall. The ensemble explores the variety of Purcell’s music in ‘Purcell’s Playground’ followed by the music of 17th century English taverns – including sea shanties, folk music and anecdotes – in ‘The Alehouse Sessions’ [12 July].

RT @jojo_durrant: You can hear my chat with @ginamartinuk at the @CheltSciFest about being a guest curator, what being the change means to…

Are you a writer, performer, poet, comedian, artist, activist or more? Apply now for an opportunity to be included… https://t.co/gbV10O4tTx

There's still time to join AIDA and be part of this exciting experiment! Researchers at the @UniversityLeeds and… https://t.co/KdIFzME7tZ