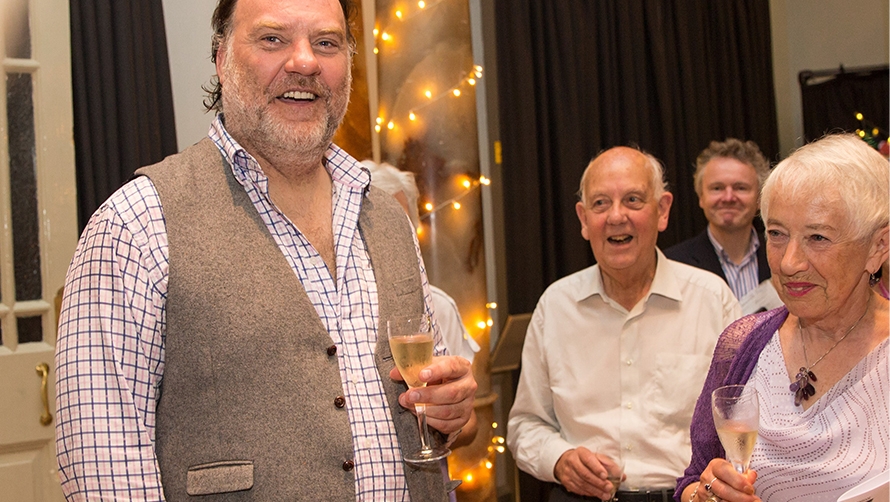 A Celebration of the Life of Graham Lockwood will be held at the Pittville Pump Room, Cheltenham at 2.30pm on Sunday 3 March.

Graham Lockwood joined the Board of Cheltenham Arts Festivals in 1993 and served as Chairman between 2000 and 2007. He oversaw a period of considerable change, including the establishment of Cheltenham Jazz Festival. In later years he became one of the first Life Patrons of Cheltenham Festivals and was Chairman of the Cheltenham Music Festival Society until July last year. He is fondly remembered by everyone at the Festivals for his kindness, modesty and wisdom.

“Graham Lockwood has been a tremendous force for good for Cheltenham Festivals over a period of decades. In the various roles he held, I can’t think there could have been a more inclusive, inspiring, intelligent individual more suited to the job of keeping a festival creative, healthy, outward-looking and aspirational. In the short time I had the honour of knowing Graham, he made me feel incredibly welcome here in the Cheltenham community, and I will personally treasure the advice he gave me and the short but valuable time I spent with him and Eileen together for a very long time to come. Needless to say he will be hugely missed at Cheltenham Festivals.”

“Cheltenham Festivals has lost a doughty champion and a munificent patron. More than that, Graham Lockwood was a man with a passion for sharing his own enthusiasm for many kinds of music with his fellow citizens. His principal achievement was perhaps to have to chaired the Jazz Festival and to have held his nerve when all around were arguing that the sickly infant should be allowed to die. But as the Chair of Cheltenham Festivals Graham was always even handed in his advocacy of Science, Literature, Jazz, and Music. And in his later years if it was the Music Festival and the Friends of the Festival to which he gave his time and wisdom then for once that reflected what mattered most to him personally. The Lockwood sized hole left now in the arts in Cheltenham will not easily be filled.”

“Graham was so kind. So supportive and positive – a generous spirit if ever there was one. Selfless folk, who want the best for those around them, and in Graham’s case, particularly, for music in Cheltenham, are a rare breed, and Cheltenham has lost a dear friend. When I was asked to consider taking on the role of Music Festival Artistic Director, it was in large part due to the trust I felt in Graham, and in the Chair at that time, Sir Peter Marychurch, that I accepted the honoured position. And not once did I feel that the trust had been misplaced, nor the support unforthcoming. It was wonderful to see both Graham and Eileen this July at my BBC NOW concerts in the Town Hall, joyfully positive and uplifted by the music and the performers they had just heard. I will always cherish the friendship Karen and I shared with Graham.”

“In his quiet, thoughtful, diplomatic and determined way, Graham’s impact on Cheltenham’s cultural scene was immense. Through his Chairmanships, financial generosity, prolific concert attendance and, latterly, authorship of two Cheltenham-related books, Cheltenham Festivals, together with the Holst Birthplace Museum and The Wilson were all the beneficiaries of that unswerving commitment to Cheltenham’s cultural life. His readiness, over many years, to serve and to give was quite remarkable, and something many of us will be grateful for. For ten years and more as Director of the Cheltenham Music Festival, I greatly valued his personal support and encouragement, always appreciating his wisdom, guidance and unfading enthusiasm for high-quality music and performance. The way Graham went about things – with integrity, discipline and humility – is something I admired from the start, and learnt from at every stage of my own Music Festival journey.”