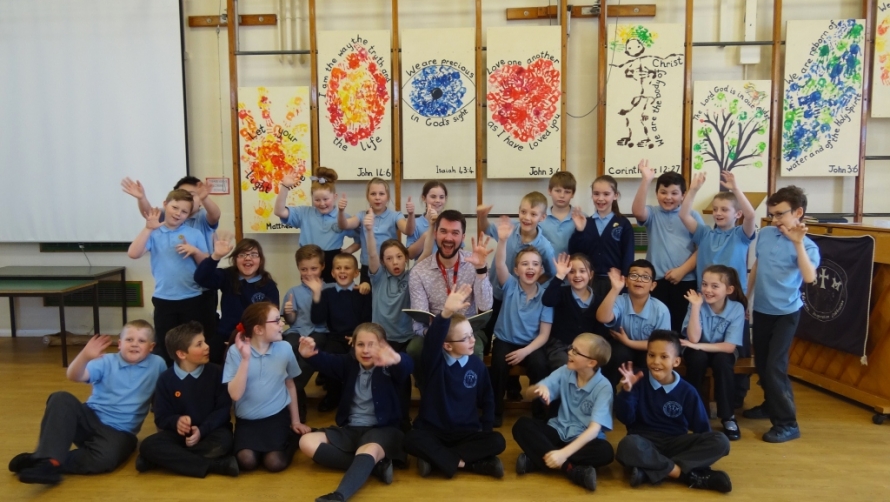 As part of Cheltenham Music Festival’s Going for a Song community project, young composer and vocal director Michael Betteridge is going to be working with pupils at St Thomas More Catholic primary school in Hesters Way, a large neighbourhood on the outskirts of Cheltenham; and with local people who visit and use the Living Room, a drop-in community centre in the same area.

During his first visit to the school Michael encouraged the children to explore music and to play with their voices, as well as to seek inspiration in every nook and cranny of their surroundings, and their imaginations. At the end of the day parents as well as staff and pupils from other classes were lucky enough to watch a short performance of snippets of the songs, written by the children themselves and composed by Michael.

In this ongoing series of workshops, Michael and the participants will be creating site-specific music: music that is inspired by, created for, and performed in a space which is unique and special to those who created the work; from the classrooms to the playgrounds, every space is a potential stage.

We are delighted to be collaborating with Michael Betteridge on this community music project in Hesters Way in Cheltenham. Working with two local groups, Michael will encourage and empower them to explore music, discover their voice, reflect on their experiences, and compose songs inspired by specific sites that are important to them.

Lea Odet, from Cheltenham Festivals, who watched the workshops said: “Michael truly mesmerised Year 4 and Year 5 pupils, who were following his movements from behind the music stand and the piano, hanging on his every word. Shoulders back, standing straight, boys and girls were giving their best! You could instantly feel the little group bonding together in this shared moment. Their enthusiasm was contagious.

“No one in the room would have guessed the little group of smiling faces had only been rehearsing for a couple of hours. We’re looking forward to following the groups’ progress as much as we are impatient to see them perform during the Cheltenham Music Festival. No doubt they will top the bill alongside this year’s artists and musicians!”

Audiences can watch the groups perform in Hesters Way at the sites they have chosen as part of Cheltenham Music Festival on Friday 10 July, and at the Festival’s Family Day on Saturday 11 July.