International authors, fresh voices and rock stars delight the crowds at The Times and The Sunday Times Cheltenham Literature Festival

Across ten gloriously sunny autumnal days, The Times and The Sunday Times Cheltenham Literature Festival welcomed the world’s greatest writers and thinkers for an international celebration of the written word.

Featuring around 900 speakers in 560 events, 200 of them free of charge, the Festival presented literary giants, debut writers, storytellers and famous faces from Steven Pinker to Motsi Mabuse, and Taylor Jenkins Reid to Stanley Tucci. An insight-packed current affairs programme was bolstered by Guest Curator Justin Webb and top journalists from The Times, The Sunday Times, and Times Radio teams. 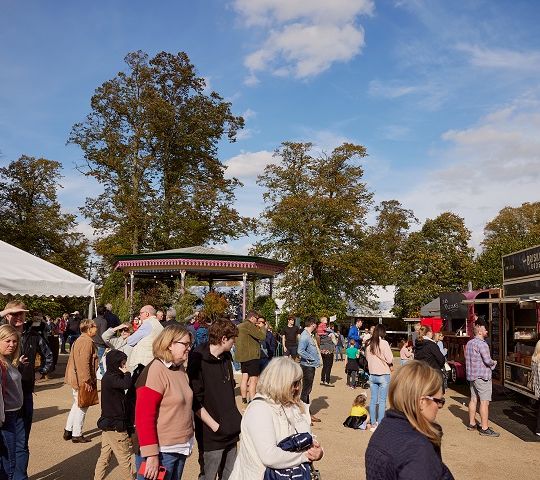 “The second year of our Read The World theme truly was a passport to a world of ideas as we welcomed international authors such as Mieko Kawakami, Karl Ove Knausgaard, Damon Galgut and Celeste Ng, as well as representatives from literary festivals from Malaysia, Ghana, Ukraine, Norway and Ireland. We hope we’ve opened the doors to a world in which everyone can explore and create culture. Thank you to our speakers, chairs and publishers, to our members, patrons, funders and partners for their invaluable support, and to our Festival team. But, above all, thank you to the book lovers that have joined us in Cheltenham to enjoy this year’s amazing line-up.”

The Festival’s Ukraine Day was co-curated with The International Book Arsenal Festival, Kyiv as part of the British Council and Ukrainian Institute’s UK/Ukraine Season of Culture. High profile Ukrainian authors, poets,  musicians and filmmakers gave a passionate account of their country’s unique, rich culture and highlighted the impact of the ongoing conflict on those personally affected.

Stephen King – recipient of The Sunday Times Award for Literary Excellence 2022 – dialled in for a rare, career-spanning interview with Mark Lawson. The shortlists for the Ballie Gifford Prize 2022 for non-fiction writing and the T. S. Eliot Prize for poetry were announced, and the six Booker Prize shortlisted authors appeared together on stage.

In its second year, VOICEBOX explored today’s hottest and most important issues in a vibrant series of free events featuring the likes of Dr Alex George, Travis Alabanza, Yomi Sode, Felicity Hayward and Francis Bourgeois.  Olympic Gold Medallist and LGBTQ+ Activist Tom Daley hosted a ‘Made with Love’ knitting workshop and VOICEBOX collaborated with Cheltenham Pride on an LGBTQ+ takeover day. VOICEBOX also saw the launch of The Scribbled Self, co-produced by six young people who participated in Cheltenham Festivals’ Beyond Words creative writing for wellbeing programme. Over the next year, The Scribbled Self will be available as a resource in every secondary school in Gloucestershire.

Over 9,300 school children met their literary heroes at events in the Literature for Schools programme, while teachers enjoyed an inspirational day at the Reading Teachers = Reading Pupils Conference hearing from industry leaders in literacy and education.

Lit Crawl brought spoken word performances, comedy, readings and even floristry and Dungeons and Dragons sessions to the streets, pubs and clubs of Cheltenham for a late-night literary fix, while local writers and musicians featured strongly in The Huddle.

The Festival’s strand of events celebrating early career writers such as Debuts and Cocktails, Debuts and Mocktails (for the YA audience), Proof Parties, the Sunday Times Must Reads and ‘New Blood: Crime and Thriller Writers to Watch’ were more popular than ever.

The free drop-in events for families in The Den, Story Shack and The Wild Wood saw an international author every day and creative takeover sessions in the Den with author Olaf Falafel and Wonderbly.

And Bono brought the Festival to a rapturous close, wowing the crowd with an impromptu set playing a selection of songs featured in his soon-to-be-released memoir: Surrender: 40 Songs, One Story. The departing audience couldn’t believe their luck, commenting “outstanding… incredible… sublime… what a way to end the Festival.”