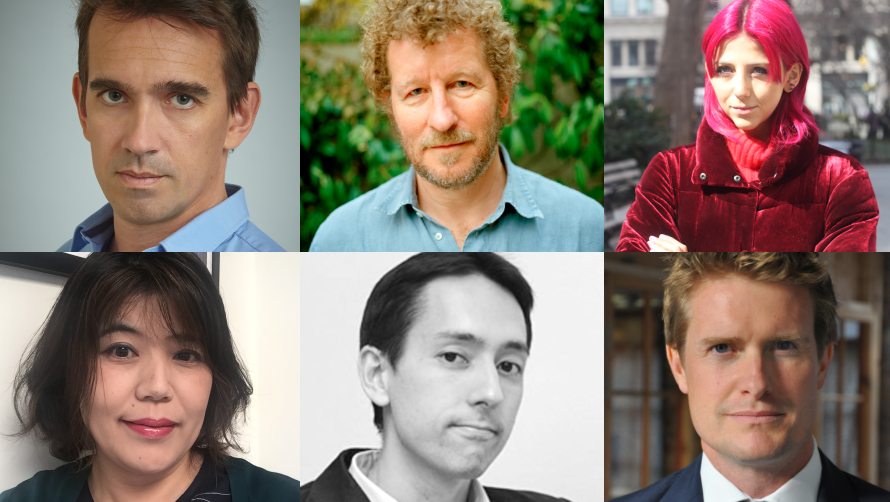 The Times and The Sunday Times Cheltenham Literature Festival is delighted to announce the Guest Curators for the 2018 instalment of the UK’s oldest literary festival, returning to the heart of Regency Cheltenham for ten extraordinary days of celebration, discussion and debate from 5–14 October 2018.

With a wealth of expertise to encourage fresh and innovative curation, these six voices are working closely with the literature team, led by Nicola Tuxworth, to advise on the 2018 programme particularly across fiction, a series of events discussing young people’s activism and mental health, and this year’s theme: East Meets West.

From the novels of Murakami to the story of the Kimono, the Terracotta Army to the Silk Road, from porcelain to Confucius, sushi to chinoiserie and Pokémon to Studio Ghibli, the theme will explore the culture and history of the Far East, in particular Japan and China. Events woven throughout this year’s programme will examine the unique histories, contemporary societies, belief systems and creative output of these two countries, as well as their relations with each other and with the rest of the world.

The Festival’s schools programme has already been announced, complementing a year-round education outreach in Gloucestershire, and will be followed by the first names and family programme on 30 June and the full programme on 17 August.

Nicola Tuxworth, the Festival’s Head of Programming, said:
“Each year the Festival team invites a small group of exceptionally talented people to advise on the programme, ensuring that we continue to bring the very best writers and thinkers to Cheltenham. We are honoured to be working with such a stellar group in 2018 – their input is hugely valuable, and we can’t wait to give a first taster of this year’s offering when we unveil the first names in June.”

Sebastian Faulks is one of Britain’s foremost novelists, his books ranging from the classic Human Traces (2005) and Birdsong (1993), which is consistently voted one of the nation’s favourite books, through to more light-hearted ventures, such as the Ian Fleming centenary James Bond novel Devil May Care and a tribute to P.G.Wodehouse, Jeeves and the Wedding Bells.

Sebastian Faulks said: “With so many new novels published every year, we’d like to look at which old books can still move us and ask which new ones might be escaping us – and why. As well as simply swapping enthusiasms for this unruly, occasionally transcendent form.”

Scarlett Curtis is currently contributing editor at Elle UK, writes a weekly column called ‘The Generation Z Hit List’ for The Sunday Times Style magazine, and has written for The Guardian, The Telegraph, Daily Mail and Vogue. In 2017, Scarlett co-founded ‘The Pink Protest’, a feminist activist collective committed to helping young people take action online and in real life.

Scarlett Curtis said: “I truly believe books can be a powerful tool for activism, feminism and are the most accessible tool that young people have to change the world. After I left school at fourteen and became confined to a wheelchair, fiction saved my life in so many ways. I can’t wait to bring this joy, education and inspiration to the Cheltenham Literature Festival.”

Dr Tristram Hunt is Director of the Victoria and Albert Museum, the world’s leading museum of art, design and performance. Since his appointment in 2017, Dr Hunt has prioritised support for design education in UK schools, expansion of the photography department and encouraging debate around the history of the museum’s global collections. Prior to joining the V&A, Dr Hunt was Labour MP for Stoke-on-Trent Central and Shadow Secretary of State for Education. He is the author of many books including Ten Cities That Made an Empire (2014).

Tristram Hunt said: “Bringing together leading curators and cultural experts, we have developed a strand of events that will celebrate the rich history and culture of the Far East, inspired by the many treasures housed at the V&A. I look forward sharing some highlights from the V&A’s remarkable Asian Collection with Cheltenham.”

Peter Frankopan is Professor of Global History at Oxford University, where he is Director of the Oxford Centre for Byzantine Research and Senior Research Fellow at Worcester College. Frankopan regularly writes for the national and international press. His book, The Silk Roads: A New History of the World (2015) topped the non-fiction charts in the UK, India and China, and is a New York Times Top 10 bestseller.

Peter Frankopan said: “I am delighted to be working with Cheltenham this year. The Silk Road is the world’s central nervous system and where civilization itself began – I’m very much looking forward to exploring this fascinating region’s past, present and future at the festival.”

David Karashima is an author, translator and associate professor of creative writing at Waseda University. He has translated into English works by authors such as Hitomi Kanehara, Hisaki Matsuura and Shinji Ishii, and co-edited the Contemporary Japanese Novella Series (Pushkin Press) and Keshiki Series celebrating new voices from Japan (Strangers Press). Karashima’s new book – a work of non-fiction about Haruki Murakami’s English translations – will be published later this year.

David Karashima said: “In recent years the UK has been embracing writing from Japan with renewed vigour and I’m delighted that many of these voices – new and not so new – will be represented this year at the UK’s longest-running literature festival.”

Junko Takekawa, Senior Arts Programme Officer at The Japan Foundation London, joined Japan’s principal public body for international cultural exchange in 1998. Takekawa is responsible for supervising cultural events delivered by The Japan Foundation London, which aim to encourage UK audiences to create a gateway to Japanese culture or understand more about Japan. This includes the Touring Film Programme, one of the largest touring film programmes in the UK.

Junko Takekawa said: “I’m very honoured to be a guest curator and as a book lover myself, being associated with literature festivals is something more than just a job. It is very timely that Cheltenham Literature Festival features Japan at a time when Japanese books and culture have never been so popular in the UK.”