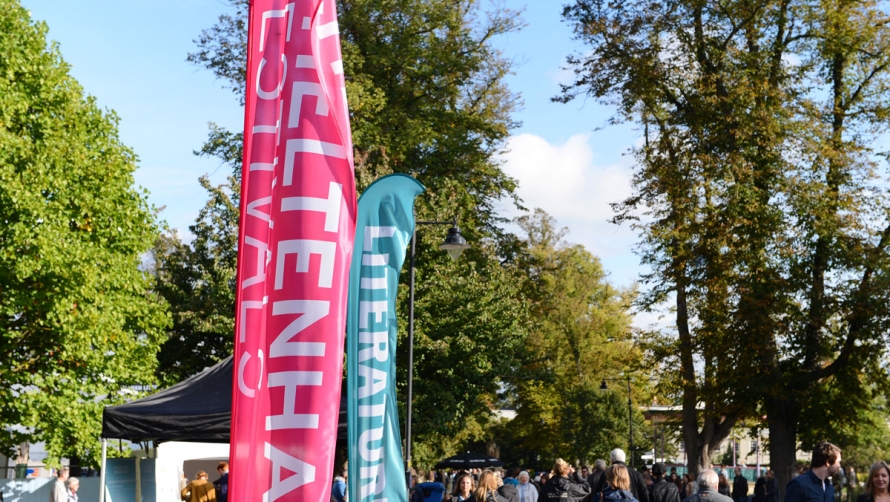 In its first year with both The Times and The Sunday Times as title sponsors, the Festival enjoyed a record-breaking year with ticket sales at almost 140,000, welcoming visitors from all UK postcodes except three and from over 25 countries including Australia and New Zealand.

Both Saturdays alone of the 10-day Festival saw over 20,000 people flocking to over 90 events and a stellar line-up of guests including Caitlin Moran, John Cleese, Nick Hornby, Margaret Atwood, Naomi Klein, Ian McEwan and Martin Amis.

87 local schools, nearly half of them secondary, got involved with this year’s Literature Festival attending talks and workshops, with younger children taking part in the Literature Discovery Trail. This year also saw the launch of News Academy, which gives teenagers the opportunity to work with national newspaper journalists and learn more about media careers.

“Britain celebrates hundreds of literary festivals as an increasing digital environment drives readers and the intellectually curious to seek out points of contact with admired novelists and thinkers. Cheltenham Literature Festival 2014 lived up to its reputation as both the oldest and most diverse literary festival in Britain, a beacon of excellence and outreach into the community, offering a stellar programme of stimulating talks, readings and debates.”

“Without doubt this has been our best Festival yet. We are proud of our commitment to placing fiction at the very heart of the Festival, to introducing our audiences to new voices across all genres, and to our work in inspiring future generations of readers and writers. We take great care to curate unique events of the highest quality and so we are delighted and exceptionally proud when our attendance figures and audience feedback verify a hugely successful Festival.”

Editorial support from The Times and The Sunday Times saw an unprecedented amount of festival coverage in every section of the newspapers with extensive news coverage during the 10-day programme. In addition, print and broadcast highlights included interviews and previews ahead of the festival in the Guardian, Sunday Express, Financial Times, The Sun on Sunday, Sunday Telegraph, Good Housekeeping, Woman&Home, Delicious and BBC History Magazine, news stories during the festival in the Daily Express, Daily Mail, Daily Telegraph, Sunday Telegraph, Guardian, London Evening Standard, as well as a day-long BBC Worldwide and Radio 2 Book Club broadcast, live from the Festival.

Waterstones, the Festival’s official bookseller, reports a sales increase of 7% year on year.

“Bookselling at Cheltenham is one of the most intensely exciting experiences you can imagine, greeting authors and customers from around the world, and being involved in events with everyone from Atwood, Ishiguro and Mantel to fledgling writers for whom the Literature Festival provides a first experience of meeting the readers of their books. Literature 2014 was our biggest event yet.”

Local businesses also reported a successful Festival period, with many shops in Montpellier opening especially on the Sundays of the Festival and restaurants choosing to serve breakfasts to feed hungry Festival goers.

The Literature Festival draws Cheltenham Festivals’ stellar season to a close. The town also welcomed 25,000 people to Jazz gigs, 15,000 music lovers to its 70th anniversary Music Festival and saw 45,000 people getting hands on at The Times Cheltenham Science Festival.