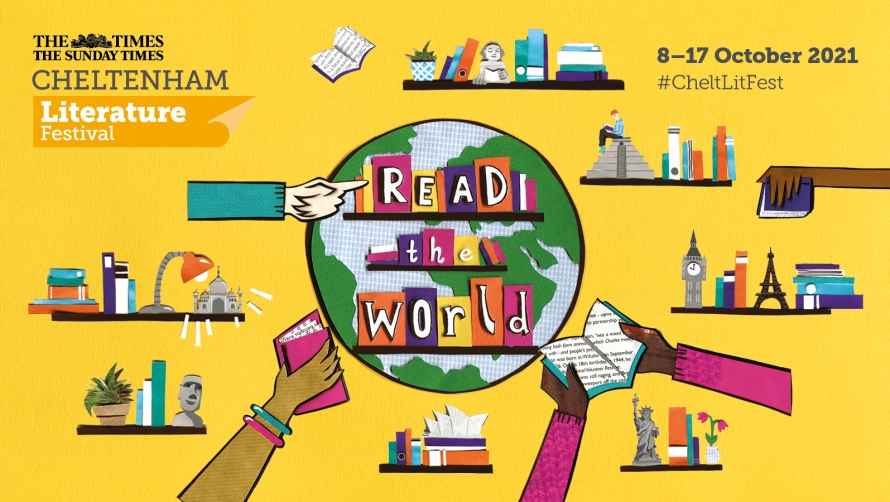 2021 sees the launch of Read the World, a major new three-year theme for the Times and The Sunday Times Cheltenham Literature Festival.

Selecting the books that help us explore and understand the world and bringing together a cohort of internationally renowned speakers and thinkers, the Festival is your passport to a world of ideas. Bringing together world-leading names and fresh new voices we will be exploring the key issues of the day from a range of different perspectives and understanding more about cultural norms from around the globe.

As the world’s first-ever literature festival (est. 1949) we sit at the heart of a dynamic global network of book festivals, as well as benefitting from rich partnerships with universities, think tanks and a range of cultural partners across the globe Through these connections we will bring you one of our most diverse line-ups to date and continue to lead the way in producing world-class programmes that push the envelope of what literature festivals can do, and who they are for.

Building on the success of last year’s Festival, which combined digital events and live audiences, we will be beaming in talent from across the globe and reaching digital audiences across the world.

We are delighted to present in collaboration with Melbourne Writers Festival a special, pre-filmed conversation with one of Australia’s most eminent writers and winner of The Australia Council Lifetime Achievement in Literature Award Helen Garner. From her 1977 debut Monkey Grip – described as a ‘watershed moment’ for Australian culture, to her acclaimed non-fiction including This House of Grief exloring the darkness of Australian suburbia. Her work, the Australian Council wrote ‘has helped Australia define its identity and has created a genre all of its own.’ Writer and critic Beejay Silcox speaks to her at home in Melbourne about a remarkable writing life.

Colson Whitehead is a multi-award winning and bestselling author whose works include The Nickel Boys, The Underground Railroad and Zone One. He is one of only four novelists to win the Pulitzer Prize for Fiction twice and has also been awarded the George Orwell Prize for Political Fiction, the National Book Award and both MacArthur and Guggenheim fellowships. In 2021, Academy Award winning director Barry Jenkins adapted his Pulitzer-winning novel The Underground Railroad into a major TV series. We’re delighted to present a special, pre-filmed conversation with one of America’s most lauded writers as he introduces his new novel Harlem Shuffle, a brilliantly entertaining novel of heists, shakedowns and rip-offs set in 1960s Harlem, and reflects on his writing journey.

Born in Peru and raised in Chile, Isabel Allende is the author of 24 bestselling and critically acclaimed books, including The House of the Spirits, Daughter of Fortune and City of the Beasts. As she prepares to launch her latest novel, Violeta in early 2022 and marking the paperback publication of The Soul of a Woman, her meditation on power, feminism and what it means to be a woman, we present a special pre-filmed conversation at home with this major world writer.

A towering global literary figure and Africa’s first Nobel Laureate in Literature, Wole Soyinka is truly one of the world’s greatest living writers. We are honoured to present in partnership with Ake Arts and Book Festival, Nigeria this conversation between Soyinka and cultural journalist Molara Wood as he prepares to publish his first novel in almost 50 years. Of Soyinka’s writing, Toni Morrison said: ‘you don’t see things the same when you encounter a voice like that’ and Chimamanda Ngozi Adichie: ‘one of the best there is today, a poet and a thinker, who knows both how the world works and how the world should work’. His new novel, Chronicles from the Land of the Happiest People on Earth is at once a savagely witty whodunit, a scathing indictment of Nigeria’s political elite, and a provocative call to arms from one of the country’s most tireless political activists.

Polish writer and activist Olga Tokarczuk is one of the most critically acclaimed and successful authors of her generation. Her novel Flights won the 2018 International Booker Prize and in 2019, she was awarded the Nobel Prize in Literature. As she prepares to launch the English version (trans. Jennifer Croft) of her magnum opus, The Books of Jacob this November we present a pre-filmed interview with the esteemed writer in partnership with Wroclaw Literature House.

Travel from New Zealand may be off the cards for the moment, but that doesn’t mean we can’t hear from brilliant Antipodean writers. With the support of Creative New Zealand’s Global Wayfinding Programme, we’re delighted to partner with three major New Zealand literary festivals: Auckland Writers Festival, Verb Wellington and WORD Christchurch. The Directors of each Festival (Anne O’Brien, Claire Mabey and Rachael King) have hand-picked a standout writer from their recent programmes: Ruby Solly (Tōku Pāpā), Elizabeth Knox (The Absolute Book) and Mohamed Hassan (National Anthem) and will present a short interview with each.

International travel may be restricted this year, but that doesn’t mean innovative partnerships with our valued friends in the network of global literature festivals can’t continue. Thanks to the support of the Australian High Commission, we’re delighted to be working in partnership with Melbourne Writers Festival as part of the British Council’s UK/Australia Season 2021-22. Flock is a brilliant new anthology showcasing some of the finest short stories by First Nations writers from the last 25 years. A tableau of narratives spanning elegies for Country and reflections on colonial dispossession, it calls to attention the ongoing resonance of Aboriginal and Torres Strait Islander storytelling across generations. In a panel devised by MWF First Nations Curator Bridget Caldwell-Bright, Bryan Andy speaks with Mykaela Saunders and Adam Thompson about their contributions to a vital new collection.

Cheltenham is a key Festival to hear from major Japanese writers, with authors including Sayaka Murata, Genki Kawamura, Masatsugu Ono and Kanako Nishi appearing on our stages in recent years. Thanks to a continued partnership with The Japan Foundation, this year is no different and while travel from Japan remains restricted, we instead present a digital showcase of two stellar Japanese writers to watch: Kikuko Tsumura (There’s No Such Thing as an Easy Job) and Keiichiro Hirano (At the End of the Matinee). Interviewers: Victoria Young and Suzi Feay.

In partnership with the Japan Foundation

Speaking Volumes Presents ‘Not Quite Right for Us’: Travel

‘Not quite right for us’: the dismissive, casual disdain of the phrase will be all too familiar to anyone who has felt the sting of unjust exclusion, whether in the classroom or the workplace, at home or abroad. To mark ten years of ground-breaking publishing of diverse voices and experiences, Speaking Volumes have created an anthology of forty essays, short stories and poems – by turns wry, gentle, furious, humorous, passionate, analytical and elliptical – of new and established writers responding to the theme of ‘not quite right for us’.

To coincide with the inaugural year of our ‘Read the World’ Festival theme, we present a travel-themed snapshot of the anthology:

The idea of travel brings with it the promise of glittering, sandy beaches, adventure, holiday. But that’s for those who are able to come and go as they please: one person’s exploration is another’s exploitation. For many, travel has been ‘not quite right’ for centuries, bringing conquest and oppression, inequality and ecological disaster, prejudice and walls to keep out ‘the other’. Hear five authors’ takes on this theme, from a play by Gabriel Gbadamosi and a short story by Aminatta Forna to poetry by Michelle Cahill, Rishi Dastidar and Rafeef Ziadah.