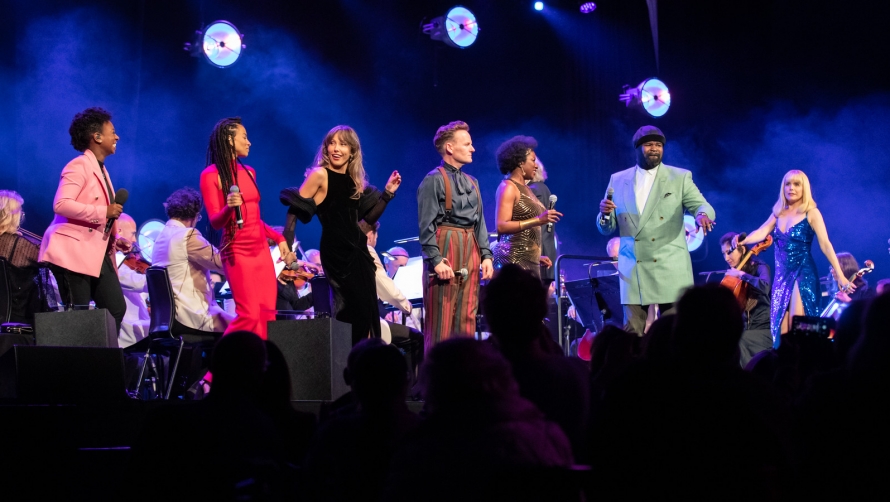 “Cheltenham points to jazz’s bright future” The Telegraph ****
“eclecticism reigns — world, folk, heritage pop — and all are welcome to the town’s genteel streets” The Times ****

After a break of two years due to the pandemic, Cheltenham Jazz Festival 2022 came storming back for its 25th edition.

Festival highlights included:
A BBC Celebration of 25 Years of Cheltenham Jazz Festival broadcast on BBC Radio 2 Sunday Night Is Music Night (Sunday 1 May) and BBC Four (Sunday 8 May) featuring 70 musicians including Gregory Porter, Paloma Faith, the Guy Barker Big Band and the BBC Concert Orchestra. The unique symphonic Festival commission recalled some of the standout moments from across its 25-year history.

1200 excited children from 17 primary schools swarmed into the Big Top for a special Concert for Schools performed by musicians from the Festival’s Musicate education programme alongside star trumpeter Laura Jurd and Kansas Smitty’s bandleader Giacomo Smith.

A further estimated 25,000 people enjoyed free music on the Festival Village free stage and on street stages and in pubs, bars and clubs all weekend across the town.
In a crossover of festivals, for the first time ever Science met Jazz as AI curator AIDA created a set of three tracks using machine learning, based on the first note (B flat) performed at the very first jazz festival back in 1996 – guests were able to listen (free of charge) at one of the Jazz Puddles situated in Montpellier Gardens.

We are extremely proud that Cheltenham’s 25th Festival was chosen to showcase Jazz at the BBC, bringing the Festival to millions of listeners and viewers. We’ve broken box office records with our mix of international acts, jazz icons, trailblazing up-and-coming talent, intimate club gigs, world premieres and family-friendly shows, which means we are in a very good place to deliver 25 more years.