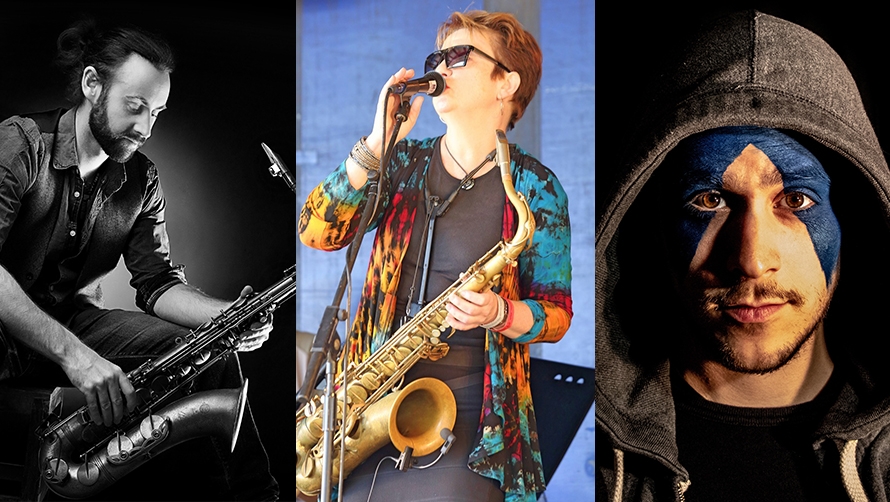 LEAH ‘s journey through soulful anthems are both chilling and inspiring. Her huge and powerful vocal is accompanied by a tight, funky four piece band. Her debut EP In With The In Crowd will be released in May.

Pixie And The Gypsies

Pixie and the Gypsies perform music from their chart-topping debut album Honey Trap, alongside a selection of covers from the worlds of pop and jazz.

Dave Elmer has been a DJ in the club music scene since the late 70’s, with performances including regular appearances at music hot spots Dingwalls, The Wag and Southport Weekender.

Local jazz vocalist Anita Walsh fronts up The Moody Tuesdays playing a mix of jazz and blues to take you into the festival weekend.

Join us for some fantastic live music from up and coming singer songwriter Ben Cipolla and the Novelle House Band with special guest saxophonist Nick Robinson performing a jazz fusion set.

Patsy Gamble is a session saxophonist, vocalist, composer and British Blues Award finalist. She has worked with Mick Jagger and Steve Winwood, among many others, and brings her band to the Free Stage.

Late Nights At The Tavern

Check out the best up-and-coming acts alongside local musical heroes at one of Cheltenham’s late night music nights. Settle in upstairs at The Tavern for a night of new sounds of jazz and beyond from LATIMO and George Montague.

The party carries on late into the night at our free jam sessions. Expect some surprise collaborations with our house band from the Royal Birmingham Conservatoire.