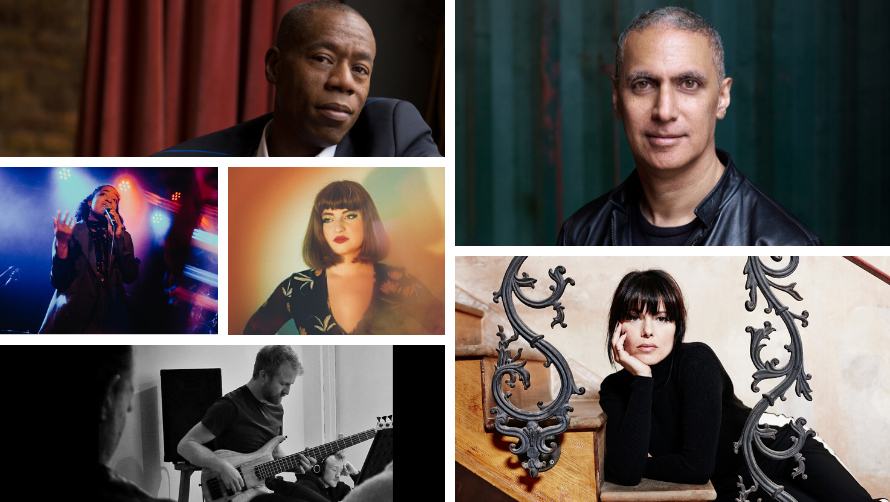 We’re delighted to announce Cheltenham Jazz Festival @ Home, a one-day, non-stop stream of jazz on our YouTube channel featuring some of the biggest names and best up-and-coming talent in jazz. After our stream has ended, the party will continue on BBC Radio 2 with famous festival sets from Jamie Cullum and Randy Crawford.

Check out the full lineup below:

Rosie Tee is a Birmingham local known for her textural, atmospheric blend of electronica and jazz, grounded by alt-pop sensibilities. With a sound dubbed ‘poised & elegant’ by BBC Radio 6’s Tom Robinson, her contemporary approach to songwriting ﬂuctuates between classical orchestration, jazz-infused grooves and electronic samples.

A new name for British soul, Amahla has garnered over 1 million streams, sold out two headline shows and received widespread critical acclaim for her distinctive voice and powerful songwriting. Fresh off performances at The Royal Albert Hall, Jazz Café and Ronnie Scott’s, she now storms the Cheltenham’s virtual stage.

Long time Tony Allen collaborator and member of Femi Kuti’s backing band Positive Force, Dele Sosimi pays tribute to the Afrobeat pioneer who sadly passed away suddenly last Thursday. Tony was due to play at the festival today and it is with much sadness that we pay our respects through our virtual festival.

One of the most compelling and consistent pop and soul artists the UK has produced now finding renewed success with current single High on Love the 3rd most played record on Radio 2 in April brings three tracks recorded from home in lockdown.

Usually performing with his trio Stillefelt, Chris Mapp performs solo this afternoon with an astonishing and beautiful set of improvised bass playing and undulating electronic soundscapes.

Performing from home, singer, songwriter and multi-instrumentalist Imelda May will perform Otis Redding and Bill Withers covers alongside her own material around the kitchen table with guitarist Niall McNamee.

One of the most distinctive and versatile musical voices of his generation, cultural pioneer Nitin Sawhney brings a set of acoustic piano tracks to the festival.

It was quite a feat to bring 16 of the UK’s leading jazz musicians together from their homes for this incredible performance of Denny Ilett‘s big band arrangements of Jimi Hendrix’s 1968 masterpiece Electric Ladyland but it has been achieved for this explosive @Home finale.

From 8pm the show continues on BBC Radio 2.

A special show presented by Jamie Cullum with highlights from the past 10 years of Cheltenham Jazz Festival.