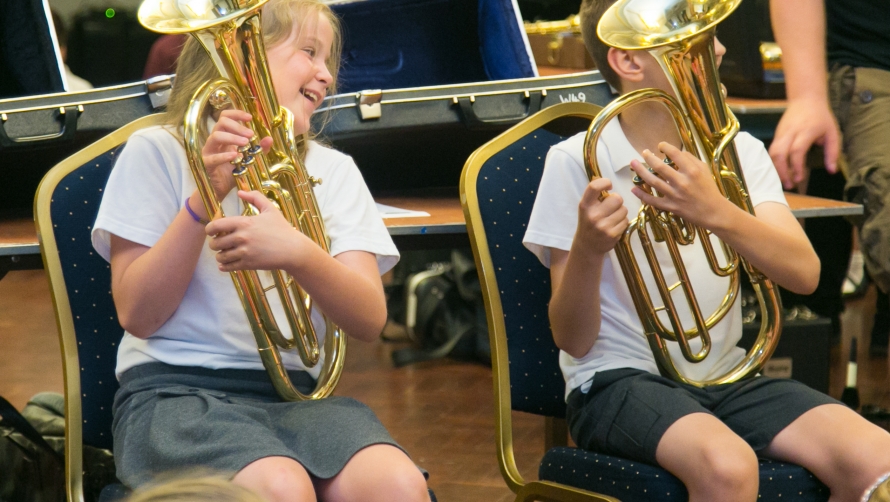 There is plenty for pupils and teachers to enjoy in our Music for Schools programme every year.

If you missed this year’s programme, keep an eye on our website for the 2018 programme in mid-March.

An e-news containing all the information you need will be sent to all schools, and booking will open on 12 March.

In 2017 more than 1,600 pupils in 16 Gloucestershire primaries enjoyed an interactive piano or percussion workshop in their school in June. In response to teacher feedback last year we also offered interactive performances for KS1 pupils for the first time, and most schools took up this option. In total we delivered 22 KS2 workshops, and 11 KS1 performances.

Our Concert for Schools always books up quickly when it goes on sale in March, and this year was no exception. 658 KS2 pupils and teachers from 10 Gloucestershire primaries enjoyed a dynamic exploration of classical music featuring artists who are passionate about inspiring young audiences. Two Musicate musicians, Jess Heynes and Chloe Knibbs, planned and presented the Concert this year, and the event culminated in a whole-audience composition exercise. Following the Concert the pupils turned the Town Hall into a riot of sound as they all had a go on a variety of orchestral instruments in the Music Explorer sessions.

What did the teachers say?

Our pupils really enjoyed the whole day. They especially liked the workshops where they got the chance to actually hold and play an instrument.Teacher, Coalway Junior School

The concert had a great variety of styles and the two ladies presenting it did a great job! The children enjoyed the composing activity and thought that it was good to see different people performing to them live. They really enjoyed the brass band.Cashes Green Primary School

What did the pupils say?

It has inspired me to do more music .I want to do music at my next school. I love music, it is fun.Pupils, Bream Primary School (Percussion workshop)

I liked how we got to compose our own jigsaw piece being able to choose which feature we wanted to add. I like how there were lots of different sounds from us doing body percussion and also the instruments from the musicians. The crowd were involved a lot which was good. I liked it when the Storyteller was played as I recognised some tunes and songs. I liked making our own jigsaw song. I liked seeing Ben playing on stage.Pupils, St Thomas More Primary

With thanks to all the supporters of Music for Schools 2017

We would also like to thank all of our generous individual supporters, including the 70th Festival Appeal Donors.