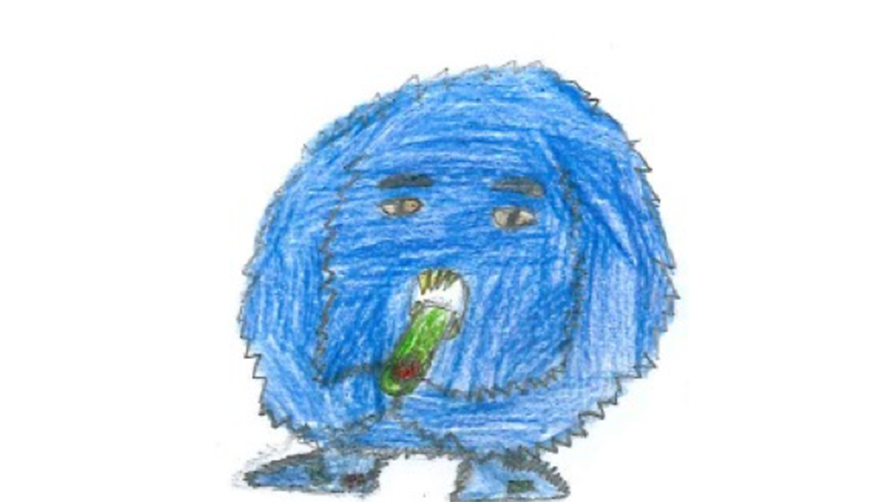 What - NO Sweets! by St John‚Äôs Primary School

Terris is a monster. No, I mean it ‚Äì Terris really is a monster who lives in a dim, gloomy cave on the top of Cleeve Hill. He is a dark blue, fluffy monster, with razor sharp teeth, that never smiles. His eyes are keen and small and very often blood-shot. His large, stout body is always covered in sticky toffee and sweet wrappers. He only enjoys two things: scoffing large handfuls of sweets, which normally end up stuck in his fur, and moaning. He loves to moan and could happily moan and grumble all day long, but he especially loves to moan about his healthy monster neighbours. 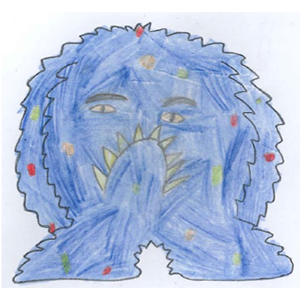 One day Terris was getting breakfast, which was a bowlful of jet black liquorice, from his large sweetie sack, when to his horror it was empty. He shook it; he turned it inside out; he flipped it upside down – he even got in it! His worst nightmare had actually happened ‚Äì his sweetie bag was EMPTY! Terris knew he had no choice but to drag himself to the shop to buy more sweets. 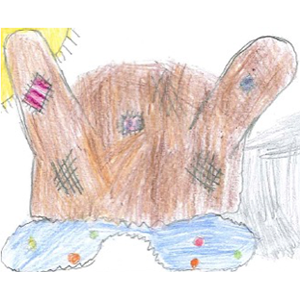 After several hours, Terris finally arrived at the local shop. He had moaned and groaned and grumbled and whinged all the way there. His feet were sore; his legs were aching; and sweat was dripping down his soggy, furry forehead. With one last burst of energy he pushed open the door and stepped inside.

‚ÄúHello, how can I help you?‚Äù asked the shopkeeper joyfully.

‚ÄúWhere are my favourite toffees?‚Äù shouted Terris rudely, whilst gasping for breath. The shopkeeper turned to the toffee shelf but it was empty. He checked in the storeroom before returning to Terris, with a worried look on his face.

‚ÄúHmm ‚Ä¶ sorry, but we seem to be all out of sweets,‚Äù mumbled the shopkeeper nervously. ‚ÄúHowever, I do have this,‚Äù he said, handing Terris a red, juicy apple. Terris looked confusedly at the apple and snatched it angrily from the shopkeeper‚Äôs hand. He turned abruptly and stormed out of the shop, slamming the door loudly behind him. All the way home Terris grumbled; he moaned and he stared strangely at the round object in his hand.

When Terris eventually got home, he slumped down onto his large pile of leaves and placed the apple next to him. For several hours he just stared at it, before plucking up the courage to pick it up and sniff it. Then he licked it and rolled it around in his hand. Still he did not know what to do with it, so he decided to ask one of his healthy neighbours.

Nervously, Terris loudly knocked on his neighbour‚Äôs green and white door. As the door was opened, Terris quietly mumbled, ‚ÄúWhat do I do with this thing?‚Äù A rather shocked neighbour explained to the still confused Terris that all he had to do was eat it. Without saying thank you, Terris abruptly turned and walked away. As he did so he began to nibble on the apple, then he took an enormous bite and before he knew it, it was all gone. Terris gave a huge burp and went home.

The next day, Terris set off again for the local shop, hoping that his sweets were now in stock. Once again the shopkeeper told him there were no sweets available. Instead he handed a surprised Terris a bright yellow banana. When he got home, he decided to take a large bite out of the banana.

‚ÄúYuck!‚Äù roared Terris, spitting out a large, mushed up mouthful of banana skin. He knew instantly he needed help, so he set off for another neighbour‚Äôs house that was even further away. 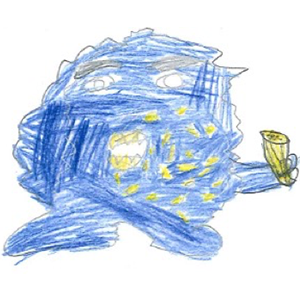 ‚ÄúPlease can you help me; I don‚Äôt know what to do with this. It doesn‚Äôt taste very nice.‚Äù The neighbour patiently explained that he needed to peel it before eating it.

‚ÄúThank you,‚Äù Terris mumbled, taking a huge bite of the banana as he left.

The following morning, Terris woke up and headed off to the shop, praying that his sweets would now be in stock. Unfortunately, there was no such luck. This time the shopkeeper handed him a spiky pineapple. After spending several minutes trying to peel it, and cutting his paws, he realised he needed to ask his neighbour what to do. Feeling embarrassed he decided to walk to a different neighbour‚Äôs house, which was a mile away. When he finally arrived, he calmly knocked on the circular door.

‚ÄúGood morning, can you help me please?‚Äù asked Terris smiling joyfully. His neighbour invited him inside and helpfully showed him how to prepare the pineapple. After sharing some of the pineapple, Terris strolled home in no time at all.

A week later, Terris jumped up eagerly and dashed to the shop. When he arrived, the shopkeeper was looking very pleased because the sweets had finally been delivered. As he turned to get them off the shelf, Terris said in a timid voice,

‚ÄúExcuse me but do you have any more of the delicious fruit in stock?‚Äù A shocked shopkeeper handed Terris a large bag of fruit. 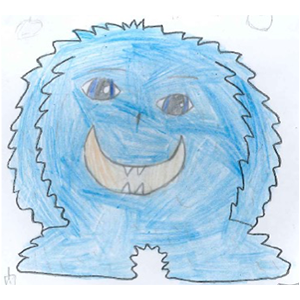 On the way home, Terris knocked on all of his neighbour‚Äôs doors and invited them to his cave later in the day. After arriving home, Terris began preparing a large fruit salad whilst humming loudly. Then he quickly headed off to brush his fur, ready for his guests, but when he looked in the mirror he noticed that his grumpy mouth was now a huge smile and his eyes twinkled brightly in the light. There were no sweet wrappers stuck in his fur anymore and his dark blue fur was now as blue as the sky.

When there was a knock on his door, he skipped happily down the corridor and with a beaming smile invited all his guests in to share his fruit salad. After several hours of playing games and talking to his new friends, Terris fell onto his pile of leaves and fell fast asleep, dreaming of all the fun he was going to have in the future with his new friends.