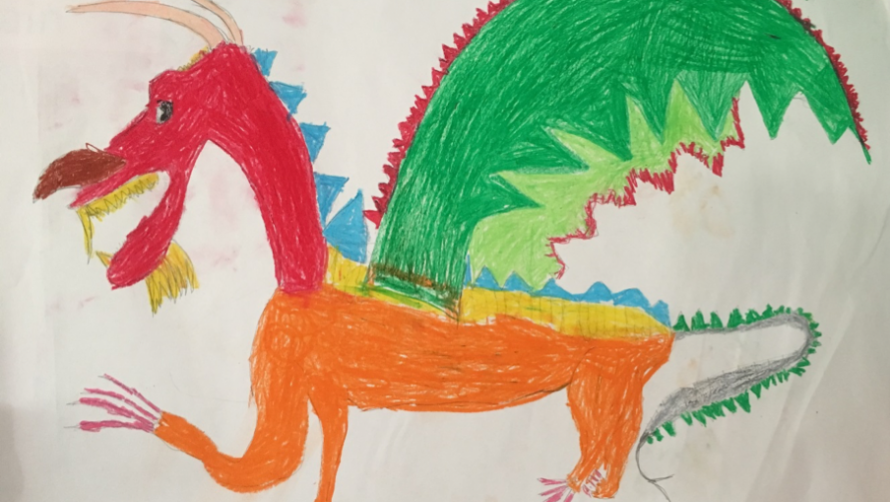 The sunlight gleamed through the knot of finger-like branches that reached out wide across the forest. The crunch of your feet could be echoed around the ancient, mossy, thick forest. Deeply entwined in the depth of the wood there lived a monster that dwelled within a damp cave. The other creatures in the forest had never fully witnessed its true form as its glare was enough to frighten and scare anyone or anything brave enough to get close. They were paralysed with fear at the thought of going into the cave. The black beady eyes peered through the dark cave. Red as fire and yellow glinted the glare; it was mesmerising and made the creatures tremble from their heads to their toes.

In the forest, Will and Beth had gone to collect wood and plants for their village. They lived on the side of the forest and they often went together. As they wondered through the forest they started to gather wood. They saw something glinting in the sunlight further ahead. They ran towards it and fell on their knees and searched in the mossy grass, finding a silver key. They had never seen anything like it before. Beth grabbed it first and held it to the light. Will noticed footprints and they decided to follow them to find out what or why the key was used for?

Deeper into the forest there stood a deep, misty, dark castle. It was wrapped in thick growing vines and night black-crows circled over it. The ancient wooden door had vines and cobwebs draped over its wooden frame. As they approached, they heard the creaky floorboards echoing around the dusty, damp entrance to the castle. The door was ajar and they both crept forward and gently eased the door open with trembling hands.

It was the creepiest thing they had ever seen. It was an ancient, mossy castle and it was falling apart. As they walked through the door they saw the crackled floor. They went in with their nerves in their stomachs and were so scared, they were frozen with fear. Ash covered the walls which had been marked with scratches and scrapes.

Beth looked up and down the wall and saw sea-coloured ivy clinging on to the wall as dearly as it could.

“Come on, can you see the shape the ivy is making?” pointed out Beth.

Will noticed the ivy was in the shape of the door. They started to pull it off the wall and finally, with all their strength, they managed to pull it away revealing a door. Beth took the key out of her pocket, turned the key and cautiously opened the door. There was a sound coming from under the floor, a wild creature or maybe something trapped. Maybe it was flesh eating, maybe it was not. Crouching, Beth noticed the sound was coming closer. The ready-brown head of a fox stared warningly and the grey-brown head of a boar stared lifelike at them. They were trying to let them know it was dangerous… should they run? Flames flared as they peaked round the corner with the light pouring in. The eyeballs were staring. Was this a trap or did someone need help? There in front of them was a large wing, damaged and broken.

They stood frozen with fear; they couldn’t move. In front of them was a dragon with a badly damaged wing. They saw the smoke billowing out from his nostrils, he was sad and frightened. Neither animal nor human wanted to make the next step. Both feared the other. It fell silent for what felt like an eternity: then a tear rolled down the dragon’s scaly, weary face. Beth and Will could tell the monster needed help. Will stepped cautiously closer to examine the damaged wing. He bravely stroked the monster and the fear they both had felt started to dissipate.

They both got up on two feet and trundled up the creaky stairs; through a room covered in cobwebs they found a book with the title ‘Magic Spells for Dragons’. They looked carefully through the book for the page on dragons’ wings. They found a list of ingredients to heal the dragon’s wing.

Setting out on their journey, they felt excited that they would be able to help the dragon but worried about finding all these ingredients. Who would help them on their quest? Delicately they unfolded the map and started to follow it; maybe the path would help. They found a rose petal and gently placed it in their basket. As they continued on the map they spotted sprouting white mushrooms underneath the waterfall. They quickly gathered them and continued following the map. When they went on into the forest and saw bees, they followed them to the hive. They used a pot to pour the honey in, carefully avoiding the angry bees.

In the distance, the glimmering sparkles lit the way to the magic tree. The leaves were golden. They had never seen anything so beautiful. Gently, Beth picked a leaf. Quickly they moved on knowing that they had little time to help the dragon.

Continuing on the path, they found a rock. Gently they moved it and underneath was a purposely placed feather. Was this the feather of the phoenix? They looked in the book and the picture matched. Finally, they reached the last point on the map, they found some golden corn in the box. They were very confused? They needed a unicorn’s tear…. They felt they had failed, how could they help the dragon now? They had never seen a unicorn, so where would they find a tear?

Will encouraged, ‘Don’t give up Beth, we need to keep trying …! They searched along the landscape and something caught Beth’s eye. Will was right-keep trying even when you think things are hard! There was something in the forest, they moved towards the shadow in the trees. Was it a horse? As they got closer they realised they had never seen such a golden mane and smooth silky fur. They had found the unicorn! It was dazzling and stunning to look at. Will got the grain out and placed his hand out gently, offering the golden grain to the animal. As it ate, tears started to flow, the act of kindness from the children had moved the unicorn to tears. Beth stroked the unicorn and managed to capture one it its tears into the pot. What an amazing scene they had witnessed. They would never forget that special moment. As quickly as it arrived it had disappeared, off on a new adventure.

When they returned to the castle they looked for a bowl, put all the ingredients together and stirred the potion. They hoped this would heal the dragon but they were also worried in case he would get angry with them if it didn’t work.

They bravely took the mixture to the dragon and placed it quickly in front of him, stood back and backed off slowly. They waited and the dragon moved towards the bowl and drank down the liquid. The broken wing slowly opened up and reached out to its full size. The children ran over to him and hugged him. The heartstring of the dragon shone brightly in his body. He had been touched by human kindness.

As his heart warmed, he began to glow and it moved through his whole body. It started to change. The colours of the rainbow started to shine though his skin. The more the children hugged him, the brighter the colours shone, until he had fully changed colour. They leapt back and gasped. He no longer looked terrifying. The brightness of his mutlicoloured body shone brightly like a rainbow in the sky. The dragon did not understand what had happened to him.

Rushing outside to the mirrored surface of the lake, the dragon – who had completely transformed – could not believe his reflection. Shocked, stunned and surprised by his change of appearance.

As he walked through the forest with his new friends the animals came out and started to laugh at him. He felt humiliated. He wanted to hide away. Would they ever accept him? He hid in his cave and wept wearily. Will and Beth decided to get some of the animals together so they could help the dragon.

The other animals in the forest had lived in fear of the dragon for many years, they were hurt as well and didn’t want to talk to him because they were afraid of him. The dragon had kept people away from him by fear. Because they had been scared, he had lived alone in the dark gloomy cave.

Confused, dismayed and frightened they had to persuade the dragon to come out of the cave. He was scared that everyone would laugh at him because of the way he looked. The children put their hands on him and together they left the cave.

At first, there was some laughter but eventually, it all petered out to silence. A small blue bird flew gently over and landed on his head. The dragon smiled. Slowly, one by one the other creatures came out to touch the dragon and his amazing technicolour skin. The colours continued to shine on his rainbow coloured scales. He was not frightening and they felt the warmth of his glow. The creatures and the dragon came to realise that it is not what you look like on the outside but what you are like on the inside that counts. Transformed from a lonely, sad dragon he became happy and kind to the other creatures. He found out about the value of friendship and how to be a good friend.